F or those of you already familiar with my work which can be found at my website www.dangreencodex.co.uk you will be aware that two irregularities, one the laying out of a poem below the statue of Alfred Lord Tennyson within the precincts of Lincoln Cathedral, and the second, a ‘curse’ at the tomb of Shakespeare in his Holy Trinity church at Stratford-upon-Avon, both appeared to me to be examples of deliberately contrived Masonic handiwork involved in the solution of a stored historical treasure at Lincoln in England, associated with the Rennes-le-Chateau mystery and of the figure Mary Magdalene. An interested party in my work – wishing to remain anonymous – has therefore donated a numerical decoding of the poem and curse, clearly indicating with the use of the key numbers 17, 27 and 33 that they are indeed of Masonic presentation. Let us first take a deeper look into the Grail poet’s poem ‘Flower in the crannied wall’. The Tennyson front Plaque ‘Flower in the Crannied Wall’
‘ The number of things simply encoded into this little poem is extraordinary. Tennyson cleverly spells out ISIS by deducting key letters from each line and each time retaining 22 and/or 27. I & S   add up to 27 in the order of the Greek alphabet & Mary Magdalene’s day, the 22nd July, was the 22nd of the 5th month in the Julian calendar.
The numbers 17 & 33 are also used to confirm his intentions by picking out, every time, letters which complement this remarkable ‘device’.
Tennyson sets the scene with the letter ‘F’, the 6th letter of our alphabet. The letters picked out by 17 are ‘I’. If ‘I’ is deducted from the number of letters in Line 1, 22 are left.
If we look at the ‘F’ on Line 4 we find an extraordinary set of correspondences. There are 33 letters in this line and F is the 17th letter forwards and backwards. It contains an ‘I’ on either side of the F complementing the 2 I’s in Line1. The second ‘I’ is the second ‘I’ of ISIS. It is also the 27th word. It is confirmed as the ‘I’ of ISIS by the fact that it is the 1st in a sequence of letters adding to 27 (I + C+ o) and if we add the ‘F’ we get 33. A ‘UL’ follows which also adds to 33. The ‘F’ at the start of Line 1 can also be added to the ‘L’ & ‘o’ to make 33. 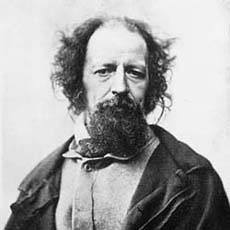 Tennyson
There are two ‘M’s ’in the poem. In Line 3, in ‘My Hand’ and the ‘M’ in ‘Man’. The latter is the 22nd letter in Line 6 and in each case ’AND’ is near to hand! ‘M’ is also the 5th letter back, which hints at the 8 words in the line and the 5 words in the 1st line. Interestingly, from your Lincoln Cathedral Code point of view, both IS & MAN add up to 28 in our alphabet making 56, as your concluding marker tomb is catalogues number 28 in the burial ground of 56 recorded tombs. And if you link either of them to the ‘AND’ preceding, you get 28 + 19 = 47 which is the total number of words.’
Next, we will journey to Shakespeare’s church and take a look at the anomalous ‘curse’ placed upon his tomb.
The first thing that struck me was the i of iesus (over emphasised) compared with the ‘I’ of DIGG and the three T’s one above the other, Freemasonry suggested by the ‘Triple Tau’. Next, we count the number of letters in each line – 29, 27, 31 and 26. Next we examine where the big i falls in the order of the letters on that line. It is the 13th forwards and the 17th backwards. The ‘R’ immediately before is both the 18th letter backwards and the 18th letter of the alphabet. Forwards, R & i become the 12th and 13th letters of the alphabet and suggest the 12 signs of the Zodiac and the Sun. If we remove the sun god ‘RE’ at the end of the line, we get 27 letters.

The Shakespeare curse
However, more importantly and more obvious, is the need to find 4 letters to make the 29 into 33 to go with the 17 of i. DVST in the 2nd line would seem the ideal candidate, directly beneath FOR iESUS.
DUST turns out to be the most important word in the poem. It has 4 letters and it is embedded in line 2 in a very precise fashion. Our ‘T’ of DUST is the 13th letter forwards (like the i) and in removing it we reduce the number of letters to 23 which just happens to be the sum of i+N alphabetically. Thus from the first two lines we know what to look out for in the 2nd 2. The middle ‘S’ of iESUS is above the ‘T’ of DUST, these are the first two letters of STONES. We are told to ‘Spare the stones’ is not to look for anything there but to look at the words beneath, literally start moving the letters in MOVES MY BONES.
We look at the BONES themselves as B+O = 17 making the previous line to 33 letters. There must be more to rob because we are left with 24 letters. To bring the number down to a respectable 22 we espy the two M’s (13=13) – bear in mind Mary Magdalene – which add to 26 like the number of letters in the line. The ‘VE’ in MOVES is an obvious target because it represents ‘Notre Dame’ with its 22+5 and now we have an extra 4 letters with the M+M to add to the 23 left inline 2 to make 27. This is an ideal situation given that i+N = 23, R=I = 27 and the U&E =27. We appear to have ground to halt at 20 letters for the last line and indeed one could stop there because the ‘T’ of ‘Y/T’ which is both the 13th and 14th letter counting back and forth is also the 20th letter of the alphabet. Shakespeare’s tomb, Holy Trinity church
There is more! To verify this you will have to cut out of thin card a precise wedge of 33 degrees. Place it, chalice-like, in the ‘V’ of DVST and it will nicely cover the R & i. Then move it down until it rests on the bottom edge of the black rectangle. It can be positioned for the left side to rest on the bottom edge of the ‘F’ & ‘D’ of ‘FOR’ & ‘DVST’, the left hand stroke of the ‘N’ of MAN and to coincide with the top and (elongated) bottom of the ‘E’ of ‘HE’. The right hand side of our 33 degree angle passes nicely through the centres of the 3 T’s thus explaining why the little one above the ‘Y’ is offset. It also passes through the middle ‘S’ of iESUS, again making a link between the letters S & T. More strikingly, DVST links IESUS, MAN and, less directly, Mary Magdalene.
The 33 degree angle links the letter ‘T’ with ‘E’. Wherever ‘T’ & ‘H’ occur in a word they are joined together. When ‘H’& ‘E’ come next to each other in HEARE they are joined. When ‘H’ and ‘E’ come next to each other in HE they are not. Thus by our 33 degree angle and a subtle hint are attention is brought to T, H & E which add to 33. Remove those three letters from our remaining 20 on that line and we have 17. Da Vinci used 33 degree angles in ‘The Last Supper’ and Poussin with his ‘Shepherds of Arcadia’, and 33 and 17 degree angles are used on the stele pf the Marie de Negre stones.
The DVS covered by the 33 degree wedge are the 10th, 11th and 12th letters on the line, adding to 33.

The enigmatic figure Shakespeare
I wondered if I had missed something in that I couldn’t make anything of the right hand side of the 33 degree wedge (like the 29 of F+D+N+E) and also there seemed to be nothing to tie up with the total number of letters ie 113. I had! The three Y’s and the two Y’s which go with them add to 110. The ‘TH & E’ which we removed to whittle the final line down to 17 letters have nowhere to go, unlike the other letters which were simply transferred to other lines. So if we lose them completely we are left with our 110. Having removed the HE T (Dutch for ‘THE’ incidentally), one can’t help noticing that the ‘THE’ in front of DVST is the only real ‘THE’ in the poem. Wondering how many letters ‘THE DVST’ was enclosed by brought me to discover 20, the number we had in the last line before the HE T was removed. The ‘E’ of E/Y is placed under the ‘TH’ thus surrounding MAN so that ‘THE DVST’ both covers and surrounds ‘MAN’. Within this box within a box, we have a triple Tau and two Y’s, two times ‘Y’ = 50, which is both 17 + 33.’