Targeting Tony Blair for His Crimes Against Humanity 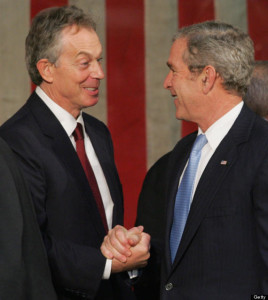 Former British Prime Minister and Middle East Quartet Envoy Tony Blair (L) greets US President George W. Bush (R) /Getty Images)
Global Research featured a collection of articles recently about British former Prime Minister (and “Peace Envoy” if you can stand the irony) Tony Blair and his machinations in the plan for war in Iraq which will inevitably mean his arrest and trial for crimes against Humanity—along with his partner in crime, George W. Bush.
Documents leaked pretty much prove the two are guilty. Who will arrest them—and when? They seem to think they are untouchable, but 96% of people polled said TB must go to jail. Won’t be long now.  ~ BP

Tony Blair’s “Deal In Blood” with George W. Bush To Attack Iraq One Year Before the March 2003 Invasion.
By Felicity Arbuthnot, October 19 2015
In what The Mail on Sunday (1) has described as a “bombshell White House memo”, leaked classified correspondence from then Secretary of State General Colin Powell to President George W. Bush, of 28th March 2002, alleges that Tony Blair had done what the newspaper calls “a deal in blood” with Bush to support him, come what may, in the attack on Iraq – a full year before the invasion.

Smoking Gun Emails: Bush and Blair Secretly Plotted War on Iraq in March 2002
By Global Research News, October 19 2015
Revealed by the British media are the details “of the ‘deal in blood’ forged between George W. Bush and Tony Blair over the Iraq War.” The meetings took place in  Crawford, Texas a year prior to the onslaught of the US-UK led invasion of Iraq.

The Secret Memo: Tony Blair’s Iraq Role Will “Follow Him to His Grave.”
By John Wight, October 21 2015
Many around the world believe that Tony Blair did not only support the Bush administration’s war in Iraq, but did so in contravention of international law. New damning evidence in this regard suggests the net is finally closing in on him.

Tony Blair must be Arrested under the Proceeds of Crime Act. “The Paramount War Crime under Nuremberg”
By John Pilger, October 21 2015
Having helped destroy other nations far away, our former prime minister — “peace envoy” to the Middle East — is a criminal. Tony Blair must be prosecuted, not indulged like Peter Mandelson.
Copyright © Global Research News, Global Research, 2015

Unlike Cameron this maggot is not stupid and is fairly astute. It has seen the fall out from its policies of destruction at home and abroad. Matters did not develop the way they were supposed to and neither Bush nor Maggot are in control of the mid-east....Putin is.!

The situation in Europe, especially Germany in near anarchy and the state media will not report it. All started by invading Iraq in 2003. Maggot can see where this is heading, with MILLIONS heading to Europe and potentially Millions trying to get in the port of Dover.

Some of you may recall it being said the Maggot feasted well while it could, unbelieving the lower orders would place a rope around its neck

» Tony Blair Heading for Handcuffs and a War Crimes Indictment?
» Pope Crimes & Vatican Evils…Benedict XVI Ratzinger Crimes Against Humanity at The Hague
» Bush, Blair wanted for war crimes: Boyle
» The Tony Blair scandal – will he ever pay the price?
» TONY BLAIR CONVICTED FOR GENOCIDE AND HAS OUTSTANDING WARRANT FOR PROSECUTION