» French film from 1947 predicts smartphones and other modern day technology!

Today at 1:45 am by RamblerNash

Today at 1:23 am by RamblerNash

Yesterday at 9:53 pm by LadyDragon

» THE HIDDEN KING - EVERYONE MUST SEE THIS

Yesterday at 6:40 pm by LadyDragon

Yesterday at 3:46 pm by RamblerNash

OUT OF MIND » THE INSANITY OF REALITY » GOVERNMENT & THE NEW WORLD ORDER » Breaking News Pakistan: 10 dead 150 trapped under rubble in Factory collapse 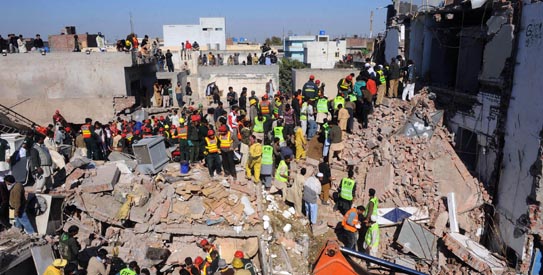 Residents and rescue workers go through the rubble of a three-story factory building, which collapsed in Lahore February 6, 2012. - Reuters Photo
LAHORE: More bodies have been pulled from the wreckage of a collapsed factory in Pakistan, raising the death toll to 21, including 16 women and four children, an official said on Wednesday.
The three-storey building used to manufacture veterinary medicines caved in from a probable boiler and gas cylinder explosion at the premises in Pakistan's second-largest city of Lahore on Monday.
“We recovered two more bodies overnight. They included a 50-year-old man and a 38-year-old woman,” said Jaber Hussain, a spokesman for the rescue team.
“So far 21 bodies have been retrieved from the rubble. The dead included four children, 16 women and one male,” he said.
Rescue teams have managed to pull out 17 people alive -- seven men, six women and four children, Hussain added.
A 13-year-old boy is in a critical condition after being recovered at around midnight (1900 GMT Tuesday), around 40 hours after the building collapsed.
“We are told there are still people trapped inside. They are alive and people have heard their cries. We don't know the exact number,” Hussain said.
The priority was to complete rescue operations on Wednesday.
“It's a huge job. We heard the authorities are deploying additional equipment and heavy machinery to clear the debris. The operation may continue late into the night,” he said.

OUT OF MIND » THE INSANITY OF REALITY » GOVERNMENT & THE NEW WORLD ORDER » Breaking News Pakistan: 10 dead 150 trapped under rubble in Factory collapse