The U.S. Navy said it launched a second — and final — thermonuclear Trident II missile in a planned exercise Monday afternoon from a submarine off the Southern California coast.

EDITOR’S NOTE: The US Navy just confirmed it launched a second Trident II thermonuclear test missile over Southern California late this afternoon, and the lame explanations continue. But what we do know is as Russia dominates the Middle East, and China flexes it’s muscle in the Pacific, the Obama government is wargaming nuclear missile attacks on the people of Los Angeles. You can just smell the coming false flag operation that’s right around the corner. Isn’t it time for the next “spontaneous” mass shooter to make an appearance? That’s America in 2015, people…sad, isn’t it?

The second test launch of the Trident II (D5) missile from a ballistic submarine in the Pacific Ocean took place Monday afternoon, the Navy said. The blast-off took place to far less fanfare than Saturday night’s launch, which provoked residents from San Francisco to Mexico to take to social media, posting photos of an eerie-looking bluish-green plume smeared above the Pacific.
Speculations were wide-ranging, including rumors of an otherworldly alien UFO visit. In fact, the streak was generated from the Trident missile’s rocket motor.

The Navy later confirmed a ballistic submarine launched an unarmed Trident II (D5) missile in a test flight, but would not define the window of time available for conducting additional launches, nor would it disclose where the exercise was actually taking place.

“It’s important that we test these missiles for our national security,” said John M. Daniels, spokesman for the secretive Strategic Systems Programs office, which oversees the Navy’s nuclear-tipped missile arsenal. “We don’t announce future launches, but this is it for any time soon.”

The Kentucky, the ballistic submarine, conducted the two launches as part of a demonstration and shakedown operation, or DASO, process that certifies the readiness of a submarine’s crew and strategic weapons before returning to operational availability.
It occurs after a submarine has its mid-life nuclear refueling, which involves replacing the expended nuclear fuel in the submarine’s reactor with new fuel. The Kentucky entered Puget Sound Naval Shipyard in Bremerton, Wash., in February 2012 for an overhaul that ended in April. source 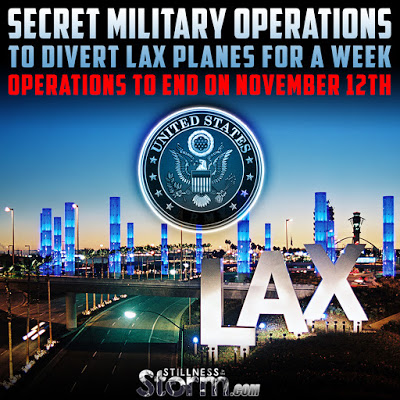 The media announced on November 7th that the US military will be conducting secret operations between the 7th and 12th of this month. On November 7th, Californians saw a large 'mysterious object' lighting up the night sky, which some thought was an extraterrestrial UFO, but authorities later stated it was a missile test. By all accounts, the object does, in fact, appear to be a terrestrial object.

It's possible that the two events are connected, but
anytime the government publicly discloses actions of this type, many people become suspicious about what activity might be taking place; and with good reason.


There have been countless false flag attacks and staged events conducted during government or military exercises. The infamous September 11th attacks took place during an exercise to test the response time for hijackers taking over commercial flights, which just so happened to be occurring when allegedly 19 hijackers overwhelmed five pilots, crashing the planes into various targets.

What other events could be in store for the remaining three days of these operations is unclear.

Mysterious maneuvers over the Pacific are forcing a change in Los Angeles International Airport landings late at night, meaning noise for thousands of people in the flight path.

Instead of landing from the east over Inglewood, planes begin flying from the west and over the ocean to keep noise levels down, but due to secret military operations, the airspace over the Pacific is closed to incoming flights for the next week.

"We clearly understand that neighbors and communities east of the airport will experience noise and we apologize for that," said Nancy Castles, LAX public relations director.

The military is not saying what exactly is causing the change, and LAX claims it's also in the dark. Castles said all they know is planes can't be flying at low altitudes to our west.

Six years ago, ABC7 cameras captured a military operation in downtown LA. Helicopters were seen swooping between high-rises, close enough that residents were able to see armed soldiers in camouflage outside their window.

Authorities claimed it was part of a training exercise designed to ensure the military's ability to operate in urban environments and to prepare forces for upcoming overseas deployment.

What's going on this week is a mystery.