The Most Impressive Cannabis Case Study Ever? Curing Girl, 14, of Terminal Leukemia 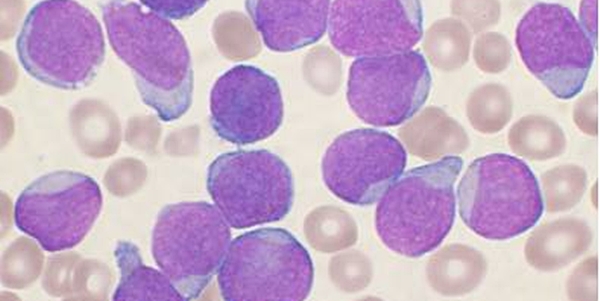 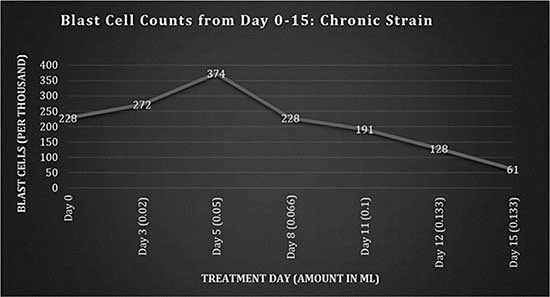 However, by day eight she was rapidly responding to the anti-tumoral actions of marijuana resin as she gradually built up a tolerance to the RSO and was able to increase her dosing.
Initially she had a tough time taking the potently psychoactive RSO. Even with tiny doses she reported several panic attacks along with increased appetite and fatigue.
The panic attacks may be due to the strain chosen which had some Sativa hybrids in it. Usually Mr Simpson and others who use this medication prefer to stick with the Indicas which tend to make you sleepy rather than stimulated. This helps you avoid panic attacks and anxiety while allowing you to dose higher. The Indicas encourage sleep to help heal.
After day 15 the original Chronic strain RSO was consumed to be replaced by a new (unknown) strain for the next round of dosing. As you can see from the below graph her blast count started to rise again doubling by day 27 to 66,000. Right at this point the dosing was increased from 0.5 ml on day 25; to 0.75 ml on day 27; and finally to 0.8 ml by day 34. 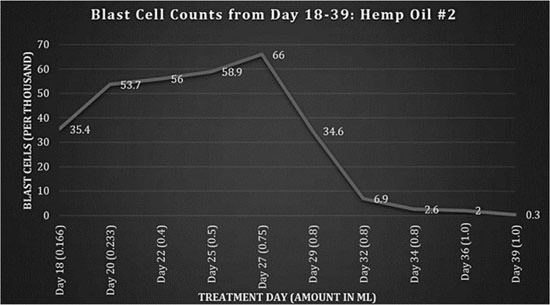 Then something very interesting happened. Her blast cell count suddenly plummeted to 6.9 by day 32. Meanwhile, some additional blood chemistries revealed that her uric acid levels were through the roof which started to produce joint aches and pains. Similar to acquiring the disease gout she was successfully treated pharmaceutically with allopurinol.
TUMOR LYSIS SYNDROME
But the fascinating thing is that all of the uric acid, her doctors determined, was coming from “tumor lysis syndrome.” This indicates that the cannabis preparation was so potent that it was killing off her blast cells with unheard of efficiency leaving her body to deal with the biochemical debris (uric acid) from an exponential die-off of cancer cells.
In fact, the cancer-killing effects were more dramatic than any known chemotherapy drug and hugely successful in treating her ALL. She was aggressively driving her ALL into remission.
HEMP OIL #3
On day 43, a new batch of hemp oil from an Afghan/Thai strain (referred to as Hemp Oil #3) prepared by the family was administered.

Above you can see the very low titer of blast cells showing how effective the preparation was. At this point she was essentially in remission with a fraction of the blast cells she previously had.
HEMP OIL #4
At around day 50 a new RSO formula was used. Keep in mind that the chemo drugs she was previously given only made her sick, malnourished, and vulnerable to infections. Due to the cataclysmic effects of the chemo she was not able to take foods orally during this period.
Several complications from her previous chemoradiation emerged. Since she was constantly nauseated and unable to keep food down she needed to be on TPN (feeding through an IV) to prevent further malnourishment. In light of the difficulties regarding oral feeding her dosing of RSO was decreased from three times per day to two. That change led to an increase in her blast count. Note that at times she was only receiving half of the recommended one gram of RSO per day. This was a terrible mistake.
Dr Singh:

The dosing regimen was intermittent until day 59, remaining at 1-2 doses per day of 0.5 ml. As the blast cells began to increase and the patient’s appetite increased, the dosing frequency was again increased to 3 times per day starting on day 62, and the amount administered was increased from day 65. 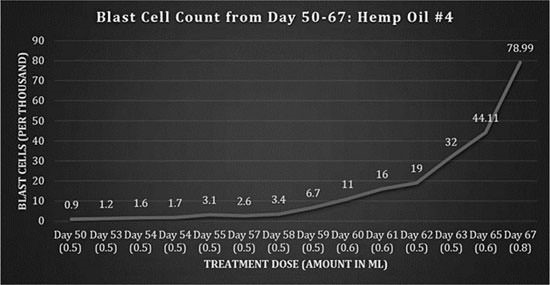 HEMP OIL #5
On day 68, a new batch of medicine was obtained by the family referred to as Hemp Oil #5. As you can clearly see there is a powerful dose-response decrease in her blast count, once again demonstrating that it is from the “hemp” oil and not a coincidence.
Also during the 78 days of RSO she was taking absolutely no other anti-cancer medications. Her doctor confirmed that this was not a spontaneous remission but due to the ingestion of cannabis essential oil. This is similar to a re-challenge effect where a medicine is stopped allowed to clear and then restarted to ascertain its true efficacy. It appears that the increased dosing of the RSO is responsible for this turnaround.

Lastly, we have the graph featured below which is a summary of the entire 78 days she was on RSO.
Although much more research is needed this graph clearly offers “proof” of efficacy even to steadfastly conservative mainstream oncologists who are very hostile to using “unproven” (err unpatented) drugs.

I am curious, would the outcome have been better had she refused chemoradiation or a bone marrow transplant? Even the author admits that the chemo substantially harmed her and led to her death. I suspect that she would still be alive today if she had only used RSO at the correct dose, and began her treatments the week she was diagnosed with ALL.
The previous chemoradiation had such an appalling effect on her health that she was never able to recover from it. The conventional treatments, and the disease, led to a severe neutropenia: a scarcity of an important immune cell line called neutrophils. These cells are the first to arrive when a patient develops an infection which ultimately caused in her case a bowel perforation, peritonitis, sepsis and death.
Often times in cases like this the oncologists wait far too long before trying cannabis oil.
Dr Singh:

This therapy has to be viewed as polytherapy, as many cannabinoids within the resinous extract have demonstrated targeted, antiproliferative [not able to reproduce], proapoptotic [inducing cell death] and antiangiogenic [halts new blood vessel growth in tumors] properties. This also needs to be explored further, as there is potential that cannabinoids might show selectivity when attacking cancer cells, thereby reducing the widespread cytotoxic effects of conventional chemotherapeutic agents. It must be noted that where our most advanced chemotherapeutic agents had failed to control the blast counts and had devastating side effects that ultimately resulted in the death of the patient, the cannabinoid therapy had no toxic side effects and only psychosomatic properties, with an increase in the patient’s vitality.

Another important point: as you can see from the above data the patient’s RSO formula was different each time they made a new batch. This is dreadfully inconsistent. Ideally we want one type of RSO made from the same varietal or at least the same species (Indica) each time.
UNDERDOSED?
Based on the graphs presented, the patient’s daily dose is indicated in parenthesis in milliliters on the horizontal coordinate. Although from the discussion versus the graphs it is not entirely clear what she received each day, we’ll have to assume that the amount in parenthesis is the total daily dose. If it is then she never received the recommended total dose of one gram (approximately one milliliter) per day for much of her stay.
Only on day 29 did she start to receive (close to) one gram per day total until day 39. The dose was decreased again by day 44. Then only the final 12 days did they return to 0.8-1.0 ml dose.
Increasing the dose in response to an increasing blast count and then decreasing it as the count drops was a bad idea.
CONCLUSION
Yet, in spite of an inconsistent black market pot supply and the likely underdosing, the results speak for themselves. With odds incredibly stacked against this brave young soul she nearly cured herself!
In fact, she did “cure” her ALL but the chemoradiation had destroyed her ability to recover.
What we have here is a crude weed extract made from a half-dozen differing varietals that any cave dweller could make blindfolded with one arm. Although it was probably full of impurities and differed in potency from batch to batch, we just witnessed an event that made the multi-billion dollar chemoradiation franchise look like a Keebler Elves bake sale.
IS ANYONE LISTENING?
Why isn’t this making front-page news around the world?
Clearly, for every critic to see with real data graphs, the anti-cancer activities of RSO are far more efficacious than the best chemo they offer. Plus it isn’t going to kill you to cure you. Think about this for a minute: a crude pot extract did this.
Now where does that leave us?
Well, we have a non-toxic drug that works overnight to kill blast cells, and it put ALL into remission in a matter of weeks.
If that’s not a magic bullet then I don’t know what is. 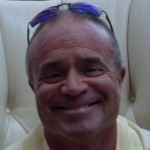