OUT OF MIND » THE INSANITY OF REALITY » GOVERNMENTS & THE NEW WORLD ORDER » Tony Blair Heading for Handcuffs and a War Crimes Indictment?

Tony Blair Heading for Handcuffs and a War Crimes Indictment?

By Felicity Arbuthnot
“I think most people who have dealt with me think I am a pretty straight sort of guy, and I am.” (Tony Blair, 21st October 2011, BBC1.)
Given the ongoing revelations on the extent of Tony Blair’s duplicitous collusion in the illegal bombing and invasion of Iraq, it seems – to muddle metaphors – the “bunker busters” and Cruise missiles are finally coming home to roost. 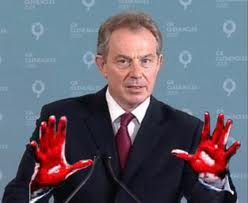 In what has been dubbed “an apology” Blair even took to CNN in an interview with his pal Fareed Zakaria to – sort of – explain himself. It was no “apology”, but a weasel worded damage limitation exercise as more and more revelations as to disregard for law – and to hell with public opinion – surface. The fault was that “… the intelligence we received was wrong”, there were “mistakes in planning” and a failure to understand: “what would happen once you removed the regime”, said Mr. Tony. Statements entirely untrue. It is also now known he plotted with George W Bush in April 2002, a year before the onslaught, to invade, come what may.
He also found it: “hard to apologise for removing Saddam.” Sorry Mr. Blair, the all was lawless, illegitimate and criminal – and Saddam Hussein was not “removed”, he was lynched, his sons and fifteen year old grandson extra-judicially slaughtered in a hail of US bullets – the all in a country whose “sovereignty and territorial integrity” was guaranteed by the UN.
Whatever opinions of the former Iraqi government, the crimes committed by the US-UK war of aggression and aftermath, make the worst excesses of which Saddam Hussein’s Administration were accused pale by comparison.
Blair brushed off the mention of a war crimes trial and made it clear that he would trash Syria as Iraq, had he the chance. To this barrister (attorney) by training, legality is clearly inconsequential.
Now no less than the UK’s former Director of Public Prosecutions (2003-2008) Sir Ken Macdonald has weighed in against Blair. That he held the post for five years during the Blair regime (Blair resigned in 2007) makes his onslaught interesting. Ironically Macdonald has his legal practice at London’s Matrix Chambers, which he founded with Blair’s barrister wife Cherie, who also continues to practice from Matrix Chambers.
In a scathing attack, Sir Ken states (1):

“The degree of deceit involved in our decision to go to war on Iraq becomes steadily clearer. This was a foreign policy disgrace of epic proportions …” Referring to the CNN interview he witheringly dismissed Blair’s performance saying: “ … playing footsie on Sunday morning television does nothing to repair the damage.”

Moreover: “It is now very difficult to avoid the conclusion that Tony Blair engaged in an alarming subterfuge with his partner, George Bush, and went on to mislead and cajole the British people into a deadly war they had made perfectly clear they didn’t want, and on a basis that it’s increasingly hard to believe even he found truly credible.”
Macdonald cuttingly cited Blair’s: “sycophancy towards power” being unable to resist the “glamour” he attracted in Washington.
“In this sense he was weak and, as we can see, he remains so.” Ouch. 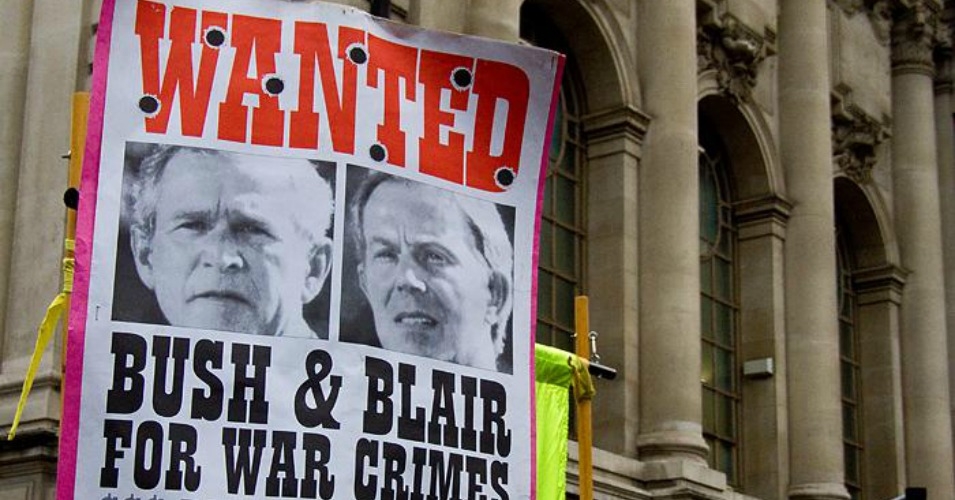 “Since those sorry days we have frequently heard him repeating the self-regarding mantra that ‘hand on heart, I only did what I thought was right’. But this is a narcissist’s defence, and self-belief is no answer to misjudgment: it is certainly no answer to death.” No wonder Sir Ken had headed the country’s legal prosecuting service.
Macdonald’s broadside coincides with further “bombshell revelation” in the Mail on Sunday (2) revealing that “on the eve of war” Blair’s Downing Street “descended in to panic” on being told by the Attorney General Lord Goldsmith that “the conflict could be challenged under international law.”
There was “pandemonium”, Blair was “horrified” and the limited number of Ministers and officials who had a copy of the written opinion “were told ‘burn it, destroy it’ “ alleges the Mail.
The “burning” hysteria centered on Lord Goldmith’s thirteen page legal opinion of 7th March 2003 – just twenty days before the attack on Iraq. The “pandemonium” related to the fact that at this late juncture with: “ … the date the war was supposed to start already in the diary”, Goldsmith was still: “ saying it could be challenged under international law.” 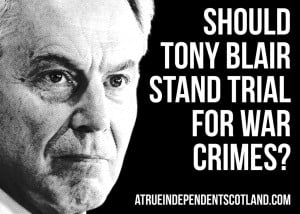 It is not known who gave the “burn”, “destroy” order, but the Mail quotes their information as coming from a former senior figure in Blair’s government. They then “got to work on” Lord Goldsmith. Ten days alter His Lordship produced an advice stating the war was legal. It started three days later, leading eminent international law Professor Philippe Sands to comment memorably: “We went to war on a sheet of A4.”
A spokesman for Tony Blair called the claims or orders to destroy “nonsense” adding that it would be: “ … quite absurd to think that anyone could destroy such a document.” With what is now known re the lies, dodging and diving related to all to do with Iraq under Blair, the realist would surely respond: “Oh no it wouldn’t.”
The US of course stole and destroyed or redacted most of the around 12,000 pages of Iraq’s accounting for their near non-existent weapons, delivered to the UN on 7th December 2002 and Blair seemingly faithfully obeyed his Master’s voice or actions.
In context of the lies and subterfuge of enormity being told both sides of the Atlantic at the time, it is worth remembering George W. Bush, that same December, on the eve of a NATO summit, addressing students and comparing the challenge of the Iraqi President to the Nazi invasion of Czechoslovakia in 1938, which led to World War II. 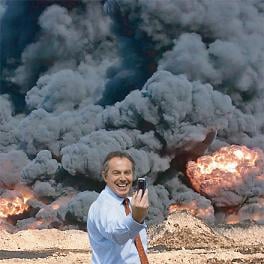 On 1st November this year, in an interview on BBC1, Blair was asked: “If you had known then that there were no WMDs, would you still have gone on?”
He replied: “I would still have thought it right to remove (Saddam Hussein.”)
Adding: “I mean obviously you would have had to use and deploy different arguments about the nature of the threat.”
Thus he would, seemingly, have concocted a different set of lies to justify the assassination of a sovereign head of State.
Perhaps he had forgotten the last line of Attorney General Goldsmith’s legal advice of 12th February 2003: “ … regime change cannot be the objective of military action.” (3)
MORE>>
+++
ZenGardner.com

OUT OF MIND » THE INSANITY OF REALITY » GOVERNMENTS & THE NEW WORLD ORDER » Tony Blair Heading for Handcuffs and a War Crimes Indictment?