Truth Is Beginning To Come Forward Concerning Angela Merkel As Front For The Fourth Reich Fri Nov 27, 2015 1:43 am

Vatic Note:   This is old news to Vatic Project.   We published a blog about this a few years ago, so finally, someone else has followed up and confirmed the results and the way she has been acting in conflict with Germany's best interests, she confirms it herself.  She is clearly a globalist.

Its going to be interesting to see how the German people handle this one.  Maybe it will help us figure out what we can do with all the traitors we have sitting in public office.  Then lets see how the German people clear out all the khazars from their government.   Iceland did it and is still around to talk about it.  So, whats to lose in giving it a very serious go?


[size=16][size=18][size=16]FUND RAISER FOR THE FIRST OF THE MONTH. [/size][/size][/size]
[size=16]  [/size]
We are again asking for the deficit of $350 for the first of the month. Due to  immediate and generous, caring donors we are now down to $100 that we need by the 1st of the month. That is only 5 days away, so we are getting close.  Again we are working on trying to end this, however, its going to take some time.  Until then we need your help to stay on the net, thats if the harassment doesn't increase as it has recently.  We are so grateful for your support in so many ways.

If you can afford it please donate off to the right of the blog.  God Bless you and your family in all things.  If we don't make it, we will leave the blog up so the 7,000 blogs can be used as a reference for future  use.  We will not take the site down.  Rather we will have to stop the research and posting since we need to raise the funds to continue to exist.  And we won't be able to do both.  We tried and it didn't work.


Truth Is Beginning To Come Forward Concerning Angela Merkel As Front For The Fourth Reich
https://dublinsmick.wordpress.com/2015/11/16/truth-is-beginning-to-come-forward-concerning-angela-merkel-as-front-for-the-fourth-reich/
by Admin of Dublins Mick, November 16, 2015

I think there is an old saying something about first they ridicule truth, then they attack it vociferously and then it becomes fact.

I noticed a piece concerning Angela Merkel being Hitler’s daughter here.
The comment section is loaded with the usual from the peanut gallery, conspiracy, LOL and other tripe. My post below on Merkel is beginning to get legs, sometimes hundreds of hits per day.

Say it with me now, Angela is Hitler’s Daughter

There is enough research in the above post to convince even the most propagandized zombie that perhaps they should take another look. If not they are really not qualified to speak on the subject in my opinion. They simply cannot process information or they are behind a keyboard in Haifa.

She has had quite a career behind her, first as a communist in East Germany, then a fascist and now a democrat in West Germany as chancellor.

Germans are great with technology but not very bright when it comes to philosophy. They had better figure out who is running the show soon or there will be no more Germans. Merkel is just finishing the job that dear old dad started. That is the destruction of Germany once again and Russia. It is really not so hard to put the pieces together as some try and make it out.

We see scads of so called alternative news sites, some still glorifying El Fuhrer. The point is we must keep those reparations payments going to Israel. It is job one and Germans need to be guilt riddled while salafists take over the country.

Let’s make it easy for Germans to figure out who is running the show.

No Hitler is not a hero, he and uncle Joe Stalin played chess together outside the Tavistock Institute in London. In fact uncle Joe was a jesuit priest. Anyone telling you different is wishes to see the final destruction of Germany, either that or they are not worth listening to in my opinion.

She is doing a bang up job as already Germany has united Europe behind the EU and even pop could not pull this one off. However there is some friction.

Merkel Shouted Down As A Traitor In Germany 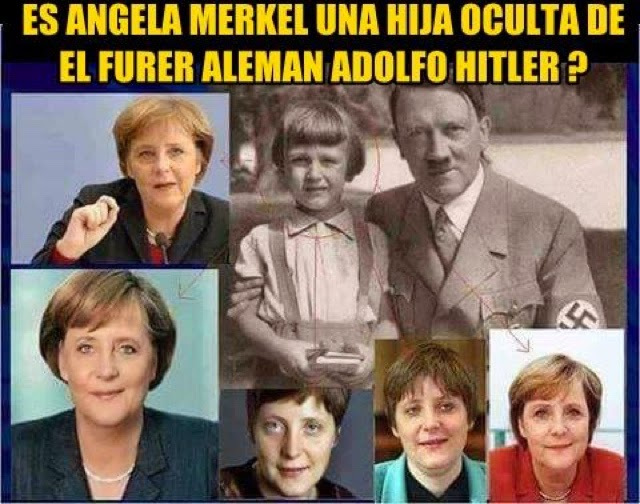 Anybody who tells you Hitler was a hero, hates Germany and Germans. Germany and in fact westerners in general are about to receive they same treatment meted out to 100 million indigenous people in the Americas.

Extermination is a tried and true method for the empire. Make your perceived enemies fight each other. Westerners have simply caused too many operational problems in the past. Germany rising up against the roman legions is simply unforgivable. The goal now is to force Europeans to fight it out on the streets with the immigrant wave while a police state takes form around them. See Paris terror attack.

Merkel is so confident of success now she tosses the German flag around like a sack of potatoes. Can Germans figure out in time why they are periodically bombed into the stoneage? It is very doubtful as they have been through a lot.

The American Government: Doomed From Its Inception

When migrants take to the streets and warn Germans their days are numbered, what do you think will be the logical progression of this insanity? When Merkel is working with Zuckerberg to gather names on who is against mass migration so they lose their jobs and children and at the same time, people gather in the streets to announce your days are numbered, does this sound like insanity? This is not illegal? At the same time Germans are being told if they don’t like it to leave the country! This won’t have a happy ending.


In France the word gun is still apparently understood.
Mexican women more experienced in dealing with crime
A Syrian or Egyptian ship was intercepted with 4 to 5 thousand guns with ammo coming into Europe.  (VN:  it might have been a Syrian ship, but you can bet your booty, that the khazars own it.)

In fact it was the salafists who caused the partition of India with help of course from the trinity of world control. In fact the first nuclear test was called trinity.

Once again look at the three stella of world control in the pic.
It is very difficult to figure out what Nostradamus is talking about until it happens. For me it is becoming fairly clear what he was referring to. The prediction the pope will flee the vatican and step over the bodies of his perished Bishops is looking awfully strong at this point.

(VN:  but then comes the time of correction and then paradise.   All we have to do is show up, do the best we can, and Heavenly Father will take care of the rest.   Good bye, Satan. )