The Technology for Mass Holographic Deception and Psychological Manipulation Has Existed for Decades
Imagine if governments could project massive, realistic holograms into the sky above entire societies, such as the image of a deity significant to a region. Imagine the implications if such a vision started speaking – the words appearing ‘telepathically’ as thoughts directly inside people’s heads. Disturbingly, this scenario may not be science fiction, as the technology for mass deception and psychological manipulation on a major scale has existed for decades.
Strange sights like giant floating cities have been reported, seen and even filmed by multiple witnesses in different continents. As recently as October 2015, the UK Express reported that floating cities had been seen in China, first over Foshan in the Guangdong province, and a few days later in the province of Jiangxi. A similar “phantom city” was seen over China in 2011. In May, 2015 villagers in Dulali, in Lanzai South Ward, Darazo, Africa Local Government of Bauchi State, Nigeria also witnessed a city floating over their village on multiple occasions, replete with cars and emanating mechanical noises – a sight they attributed to Allah. 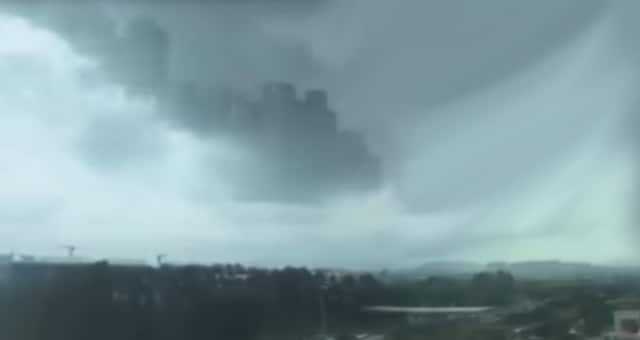 Such sightings have focused attention on theories that governments may possess the technology to project giant holograms which could be used for wide-scale deception which might now be undergoing testing on unsuspecting citizens to gauge their reactions. This type of capability is sometimes referred to by some theorists as “Project Blue Beam”.
While visions of floating cities are explained away by skeptics and authorities as natural meteorological phenomena – and suggestions of holographic projection dismissed as conspiracy theories – would it even be technically possible to project a huge holographic image like that, and would a government even wish to do so? According to research compiled by Truthstream Media and presented in the following video, the answer is yes.

According to Truthstream Media there is compelling evidence that since at least the early 1990s, the US military has been exploring the possibility of creating gigantic holograms that could be used for large-scale deception missions by special operations forces. They explain that these efforts were reported by the Washington Post in February 1999 who revealed that the US government was considering projecting a depiction of Allah over Baghdad as part of military action to destabilise Saddam’s regime in the first Gulf War. The Washington Post also reported that a secret program was established in 1994 to pursue holographic technology for psychological operations (PSYOPs) applications, and that projecting “large, three-dimensional objects that appeared to float in the air” was found to be feasible by a military physicist.
Truthstream Media also point out that over 20 years ago military research had already developed software able to replicate anyone’s voice using only a 10 minute sample of speech. They explain that around the same time patents had been established concerning voice-to-skull (V2K) technology. V2K is a technology based on the microwave auditory effect that uses microwaves to create wireless, receiverless speech communication sent directly into people’s heads.
While not widely known by most people, it’s a fact that governments engage in wide-scale psychological operations (PSYOPs) to influence the behaviour, emotions and objective reasoning of their targets. Given the propensity of governments to deliberately manipulate and influence their citizen’s behaviours could they ever be trusted to wield technology giving them the power to project gigantic holograms and to implant thoughts directly into people’s heads? Or would the temptation be too strong to use it on the unwitting masses as a form of social and psychological control?
In a subtle form, this technology could be used to manipulate public perception. For instance, a military page on voice-to-skull technology stated (before it was removed, but not before it was archived around the web) that “sound modulation” employed in V2K technology could be used to implant “subliminal messages”. Some have suggested that holographic technology could be used to instigate a one world religious authority, or could be the basis on which a false flag alien invasion could be staged, as a means to justify the implementation of a sinister global military space weapons program and give rise to a new world order with a global government. A plot to stage a faked alien attack was reportedly first warned about by German scientist Werner Von Braun – director of NASA’s Marshall Space Flight Center and credited by NASA as the “greatest rocket scientist in history” – in the 1970s.
The fact that this type of technology exists highlights the importance of becoming informed about how easily people’s psychological responses can be manipulated and conditioned by those in positions of power. As the old saying goes, to be forewarned is to be forearmed. By understanding methods of psychological influence, and how such technologies could be used in their dissemination – immunity to manipulation is developed. Thoughts, decisions and actions can then be firmly grounded in reality and personal choice, no matter what is seen in the sky or projected upon us.
About the Author
David Gardner has a deep interest in spiritual development, but has discovered there are many forces in the world working to keep people asleep. His recent interest has been researching the psychological tactics and techniques used to limit people’s spiritual potential, writing about his discoveries here at The Conscious Reporter.
Images used in original composite image used under creative commons thanks to Sagle and M.O. Stevens
Original composite released under Creative Commons CC BY-SA 3.0

» DR.WC: “When GCR Announced, There Will Be Mass, Mass,Mass Arrests (of members of Congress, the White House and the Senate,etcs)”
» Advanced Technologies Will Be Mass-Released To The Public : KESHE
» UFOs and Mass Manipulation
» Project Bluebeam: Yes, Gov’t Researched Holographic Mass Psyop
» WTF Explain This NASA Holographic Plane Or Holographic Moon You Decide