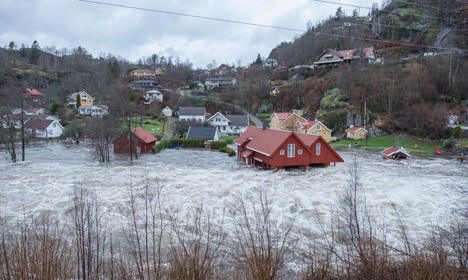 The storm Synne caused a so-called ‘200-year flood’ over the weekend, causing many Norwegians to be evacuated from their homes and affecting road and rail traffic in numerous locations.
In Rogaland, the situation was the most severe in Bjerkreim Municipality, officials said.
Here, large amounts of water surging through the Bjerkreim left the town of Vikeså underwater.
“The situation has been serious in several locations in Rogaland, but particularly in the Dalane region.
The high water levels have knocked out power and reduced mobile coverage.
When the roads have to be closed it becomes very difficult to come out with a mobile power supply,” municipal official Reidar Johnsen said.
Crisis The municipality has a crisis team on the ground, but working conditions are difficult because large areas of Vikeså are underwater, including the town hall.
There are several places with high standing water and several rivers have overflowed.
In the village of Feda in Kvinesdal Municipality, several homes were in danger of being swept away by the floods as of Sunday evening.
Many people have been evacuated and several warehouses were lost to the flood.
“Many houses have been excavated to their foundation.
It is only a matter of time before the houses are pulled into the river,” local resident Anne Kathrine Lohne told broadcaster NRK.

Freaky weather as rainfall record smashed in the UK, temp in the low 60's, 16 degrees Celsius and the next storm on it's way! 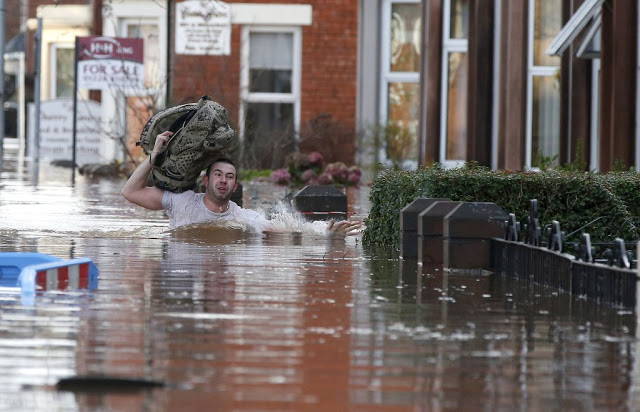 Even a Met office chief scientist admits the weather is "extraordinary"
Tens of thousands of people without power in Ireland and UK...
Thousands of houses flooded just weeks before Christmas.
Storm Desmond smashes the highest rainfall record for a 24 hour period in parts of England...
Stone bridges which have stood for centuries swept away in the floods
Worst storm in 150 years hits Norway
More than a month's rain fell in 24 hours, 350mm in some parts of the Lake District over the weekend, with more rain today and a new storm is heading for Ireland and the UK.
The freaky weather is not just about rain with temperatures in parts of England, and here in Holland, reaching and unbelievable 16 degrees Celsius or if you prefer, 61F.

In Ireland as the nationwide cleanup following Storm Desmond begins, Met Eireann has issued yet another weather warning. 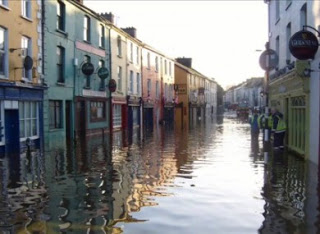 Southeast to south winds have been forecast to reach average speeds of 50 to 65 km/h.
However, stronger gusts of 85 to 100 km/h are expected to blow, with the southern and western coastal counties worst affected.
AA Roadwatch have issued their own warning to motorists in light of the new alert.
"High-sided vehicles are especially vulnerable on open or exposed roads," an AA spokesperson has said.
Meanwhile, the repair bill following the destruction amid Storm Desmond is set to run to millions of euro.
Mayo, Donegal and Cork bore the brunt of the damage, with the west Cork town of Bandon, pictured, suffering its second disastrous flood in six years.
Roads over huge swathes of the country were impassable, homes were flooded and power cuts affected thousands. 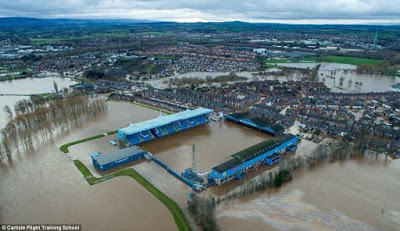 In England, the Department for Environment, Food and Rural Affairs minister Rory Stewart,  said flooding in his constituency has been "the worst that anybody's experienced" and acknowledged water had "overtopped" existing flood defences.
Hundreds of properties are without power and 40 schools are closed.
In the Lancaster and Morecambe area, where the main substation was flooded on Saturday night, engineers working "around the clock" restored power to 45,000 homes and were continuing efforts to return power to the remaining 10,000 over the course of Monday morning.
Nearly 60,000 people in the north have been left without power and Electricity North West confirmed that the majority face shortages for "a number of days" as it works to fix further faults caused by the flooding. 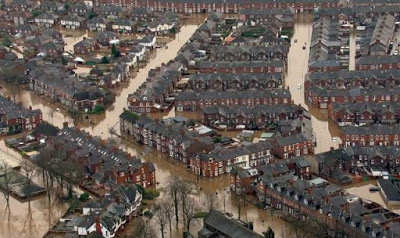 Members of the armed forces have been deployed to help evacuate people who wish to move.
The Met Office's chief scientist Dame Julia Slingo said the extreme weather conditions were "extraordinary".
The Government has already committed to a £2.3 billion programme of flood defences over six years. Following an emergency Government meeting, Environment Secretary Elizabeth Truss said that figures from a rain gauge in Honister, Cumbria, suggest a record amount of rain fell in the 24 hours between Friday and Saturday evenings.
Under his watch £115 million has been cut from flood management in the past year.
Water reached more than halfway up the windows of The New Bookshop and other stores, and volunteers at Wordsworth House, where the poet spent his early years, rushed to shift furniture and exhibits to higher floors.
Authorities in Britain have closed roads, evacuated homes and issued severe flood warnings.
Norway, parts of southern Norway are under water after heavy rains lashed the region at the weekend causing floods, damaging property and closing roads.
Iris Straume from the Norwegian Meteorological Institute says officials emptied 100 homes in the southwestern town of Eigersund and a bridge collapsed near Kristiansand, on the southern tip of the Scandinavian country.
There were no reports of deaths or serious injuries.
"It was the worst storm in 150 years," Straume said Monday, adding that the bad weather had passed. It was the second storm in a week to hit southern Scandinavia following the previous weekend's extreme weather that damaged buildings and toppled trees in southern Sweden and Denmark, canceling trains and ferries as winds reached up to 130 kilometers per hour (80 mph).
Iceland boats are in danger in the Reykjavik harbour due to the severe weather conditions and raging storm passing over Iceland yesterday evening.
The small boats in the harbour are at the mercy of the elements and are thrown around helplessly in the water.
One boat is on the loose and is crashing against the stone pier. Ironically its name is "Stormur" in Icelandic, or Storm.
A team from the harbour authority is at the scene and will attempt to secure the boats if possible. Many people are by the harbour and boat owners are very concerned about their boats.