This very clear disc shaped UFO has been caught hovering above Indiana. The eyewitness was able to give a detailed statement about the UFO and the whole experience. 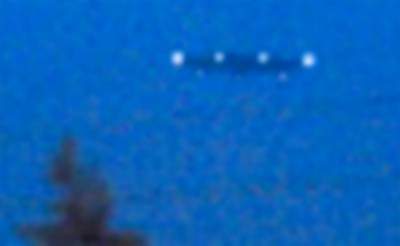 I was home alone and decided to go to the kitchen to get a glass of water and maybe find a snack. Just as I approached the kitchen/dining room area (they're the same room and we have a bay-window/patio door there) I noticed what I immediately thought was a helicopter about 300-400 feet away, just across the street and above the tree-line. Because we kind of live in the country, I thought that was unusual... then it hit me that I couldn't hear any noise at all! And then the obvious shape difference hit me like a bag of rocks and I ran for my camera - literally (I almost tripped over a rug).

I don't know how long it was there before I saw it, but it hung around for 2 or 3 minutes after I noticed it... not moving or flashing or anything. The only thing I noticed was a sort of wavy-ness of the air surrounding the object - that's probably what stuck me most, actually. It resembled kind of what you see over a hot road on a summer day. It was getting dark, but I distinctly remember the dark tree line shimmering just below the object, against the sky-glow.
I had just enough time to take a picture on my camera (before the batteries died), and then I got one on my cell phone right before it "disappeared" --- I say that, because I believe it just went directly away from me at a high speed very suddenly... it actually appeared to grow smaller and disappear, but curve up slightly as it was doing so. The direction was about directly westward I believe.
Long ago, when I was a young kid, I remember seeing a funny light in the sky (from very far away) and watching it do all sorts of "tricks" ~ but I couldn't actually see it as an object. This is the only other time that I have seen something this close, that I know from my own eyes what I saw in a detailed manner. Very exciting indeed (although the first couple nights were difficult to sleep well!)

UFO activity during manual docking for Soyuz TMA-19M to ISS

A dramatic docking for the Soyuz TMA-19M when the automated systems onboard failed close before the planned docking on December 15, 2015.

Soyuz commander Yuri Malenchenko took manual control of the Soyuz before resuming for another attempt at docking which was successful at 12.33 p.m. EST.

It’s remarkable that during the docking process some unidentified objects (orbs and a doughnut-shaped) appear near the Soyuz TMA-19M. 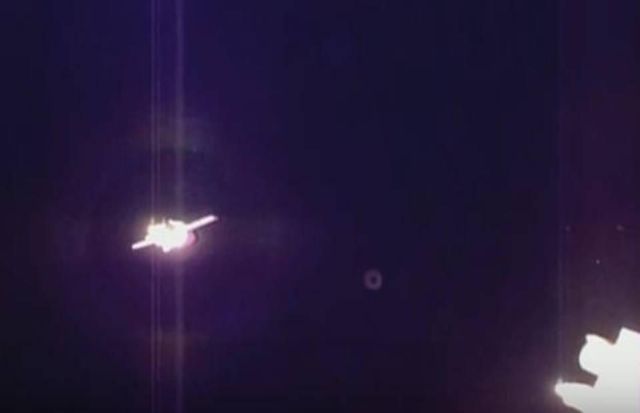 Malenchenko took control of the Soyuz, backed it away from the station to assess the Soyuz’ systems, then reapproached the complex for the manual docking.

After leak checks are conducted on both sides of the docking interface, hatches will be opened and Malenchenko, Kopra and Peake will be greeted by Expedition 46 Commander Scott Kelly of NASA and Flight Engineers Mikhail Kornienko and Sergey Volkov of the Russian Federal Space Agency (Roscosmos).