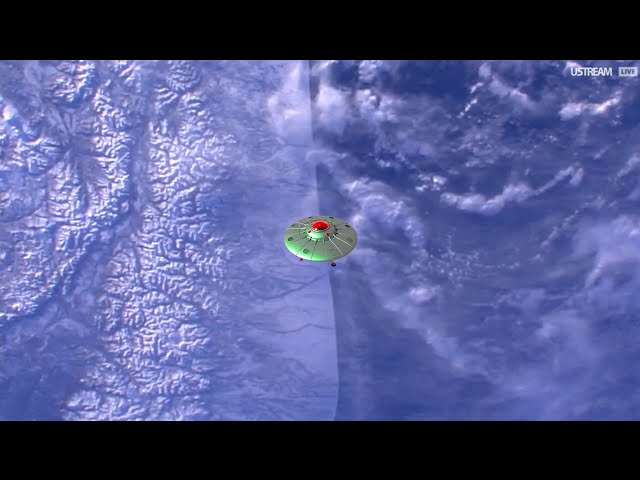 Marie Mela from Vienna was celebrating the New Year with friends in the Mostviertel region of Lower Austria.

At a certain moment a friend lets off a firework, which heads into the sky. As the rocket explodes a white object becomes visible between the clouds being struck by lightning. 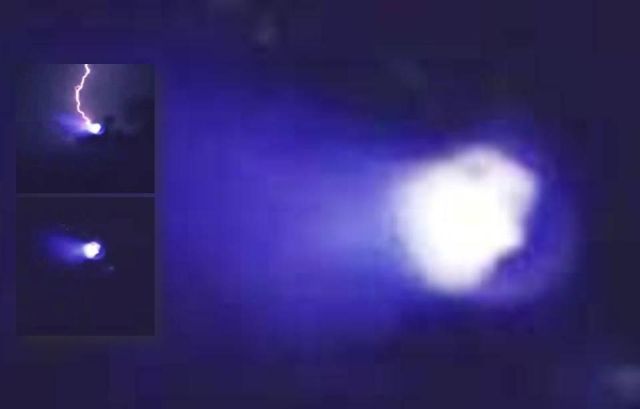 Marie Mela surprised by the strange occurrence in the sky, wrote: “Not sure if this is a UFO over Lower Austria or some bizarre weather phenomenon. Anyone any idea what it is?"

In this selfie, the eyewitness accidentally caught not one, but two UFOs. One racing across the sky. The other holding its position. New says its Russian debris, but there is no way governments in Asia would take this laying down. Meteors don't hover in place as we see here, nor does space junk.

Not only do UFOs make contrails, they can contain the contrails to an extremely large width and distance, allowing other UFOs to travel within these contrail tunnels. That is what I saw with my own eyes from my own UFO sighting back in 1990 over Rapid City, SD. But back then, the tunnels were big enough for a 747 to vanish into. With four tunnels side by side starting over my parking lot.

News states:
Charnchai Jardpimai spotted something hurtling across the sky while he was filming himself with a selfie stick on Saturday, Jan. 2, 2016. He spun around to view what he thought was a meteor streaking through the sky above Phitsanulok province in Thailand.

The National Astronomical Research Institute of Thailand said that the object was most likely debris from a Russian rocket launch in early December, and not a meteor falling to Earth. Parts of the rocket were predicted to land on the same day Jardpimai captured his video.

Posted on January 5, 2016 by Deus Nexus Leave a comment

Source: Earth We Are One
The videos you are about to see have left both skeptics and believers baffled as both sides have locked in a fierce debate about Unidentified flying objects AGAIN.
The three mysterious sightings that were captured on video over South America have left thousands of people scratching their head wondering what these mysterious objects are. The UFO’s were recorded over Chile, Brazil and Bolivia and have whipped both skeptics and believers into a frenzy.


The video footage captured in Chile and uploaded to YouTube shows a woman freaking out after seeing a fleet of unidentified flying objects hovering above the Chilean capital city. Ufologists believe there is a strong connection between Chile and UFO sightings as thousands of mysterious lights and objects have been reported over that particular part of South America in the last couple of decades.


The video footage from Chile has received hundreds of thousands of views and has the online community divided with people expressing their own points of view.
One YouTube user wrote: “It seems like real footage, complete with atmospheric flickering and pixel density.”
“Those whose saying its fake they need to get a life and come to reality,” added user masi0010.
While others don’t agree and suggest there is a perfectly logical explanation for the mysterious lights:
“I could be wrong but to me, it looks like helicopters, probably a police or military exercise.”
“You know it’s fake when the camera keeps going in and out of focus like a Michael Bay movie.”
Another video, uploaded in December shows what appears to be a giant Flying saucer hovering above a rural neighborhood in Bolivia. The footage shows what appears to be a circular-shaped object flying above the mountains near the city of El Alto.


Skeptics quickly reacted to the video and tagged it as a hoax suggesting it was created and is aimed at increasing traffic to the filmmaker’s website. Others, however, were not so convinced: “Not sure what to think of this one,” wrote one user.
The third UFO footage occurred in Southern Brazil on December 27 when a woman posted online, a picture of a mysterious blurred, disc-shaped object flying across the sky. The woman claims that she noticed the mysterious object while she was photographing her boyfriend’s football match.

“When I went back to the photo, I realized there was an object in the upper right-hand corner…I looked up to see what it could be since there was nothing there when I snapped it, there was nothing in the sky and no noise,” she said.
While these are just some of the videos that have created a buzz around the UFO phenomenon in recent weeks, 2015 has been a year filled with anomalous sightings that occurred in all parts of the planet, and even in space, thanks to the onboard cameras of the International Space Station. Here are some of them: