Admin
Posts : 658
Join date : 2011-12-19
I was having a discussion with some friends the other day, and we started talking about protestors and their causes. I was wondering what some of you think about CIVIL DISOBEDIENCE. Where do we draw the line? When is it justifiable for protesters and activists to break the law for the sake of their cause? What are your thoughts?

Posts : 56
Join date : 2012-01-01
Location : Texas
Civil Disobedience is a form of political protest when one refuses to follow 'certain' laws and refuse 'certain' taxes and refuse an 'unwarranted' hegemony. Ideally it is a PEACEFUL expression of opposition.

There are several scopes through which I choose to examine civil disobedience. Historical, Ethical, and Practical (with reference to protests in the present tense).

There have been instances in history where Civil Disobedience has been harmful to people, unethical in implementation, and at the same time been on the right side of history. For example, John Brown's Raid on the US Arsenal at Harper's Ferry, Virginia in 1859 as an act of civil disobedience, promoting the cause of abolishing slavery, was in my opinion, unjust. People were killed and property was plundered. However, time has proven his raid to be 'on the right side of history.' That is to say that his actions added to plunging the nation into the Civil War, which eventually led to the emancipation of slaves and the abolition of slavery in America.

Often a feeling of being on the right side of history motivates practitioners of civil disobedience into doing something they would otherwise not do. For example modern Islamist terrorists/suicide bombers would like to believe that their extreme actions are permissible, since in the long run, "their side" will somehow 'win" and their world view will be implemented. Here civil disobedience is neither practical and certainly not ethical. We all hope it wont prove to be on the right side of history.

Perhaps the most ideal form of civil disobedience came from Gandhi. He led a Salt March to the sea at a time when the British Colonial Government had levied a tax Indian Salt in India. The protesters marched to the sea and collected their own salt. He also sew his own clothes and cultivated his own food. Thus he overcame any unwarranted hegemony by truly exonerating himself from being dependent on the British regime. There is a great news reel clip showing Indian protesters attempting to march beyond a group of British officers, which I can't find online. Anyhow, these protesters put their hands behind their back and even while being beaten by English batons, they just got back and tried walking forward. WITHOUT ANY AGGRESSION. Now I'm not saying that Gandhi's civil disobedience was the only reason the British finally "quit" India, but it certainly proved a practical and powerful force in doing so. It was certainly ethical as no property was plundered and no one died at the hands of the protesters. Furthermore, Gandhi's satyagraha struggle in India was on the right side of history, influencing many acts of civil disobedience after it. 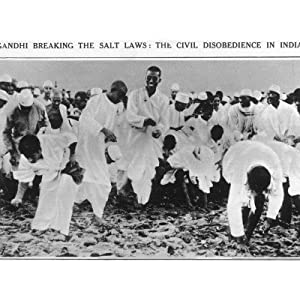 Its always a subjective matter, i guess. Because even after writing this post and thinking this over, I still feel like the Boston Tea Party was totally justified. It was property damage, but so what, the British were taxing the colonist to death.

I just think the line should be drawn at HARM. If people are being killed or harmed, its not civil disobedience, its disobedience to nature and natures laws (sometimes referred to as God's law).

"People want to see real hope restored, not false hope hyped up!" ---Me

Guest
Actually, if you really study the history, it was not so much a question of being overburdened with taxes as it was an issue of self determination and plain old obstinacy (on both sides). The taxes as passed were really not that onerous. In fact they were far less than what the citizens in England were already paying. I may have the sequence out of order, but I am pretty sure that the tea tax had in fact already been rolled back. At any rate, most of the taxes were in fact ineffective. The actual match that lit the fuse, as it were, was more an issue of smuggling in New England being sharply curtailed as a result of increased British enforcement.

I'm certainly no history expert, but I have read and continue to read extensively of that period of history. If we are to understand the documents and ideals foundational to our country and our constitution we need to understand the writers of those documents, and the times they lived in. It is only when we have done this that we can hope to understand where we should be going.