Indonesian volcanoes rumble with fire! Sinabung..Bromo erupt in the last 24 hours Soputan itching for a fight: 15 volcanoes on alert status in Indonesia 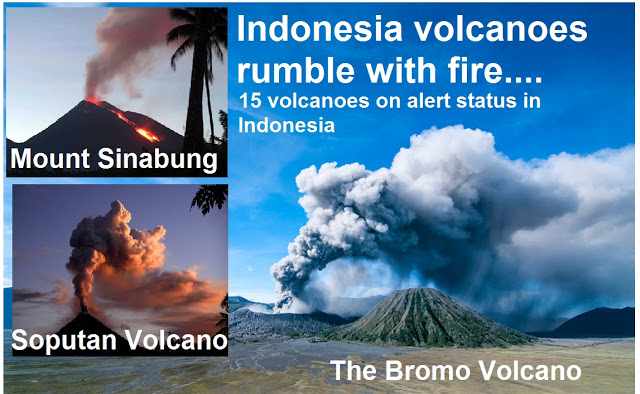 The Bromo eruption is reported to have resulted in spews of volcanic ash to a height of more than 4,000 meters above sea levels on Tuesday, January 12.
The Bromo Volcano Observation Post (PGA) in Cemoro Lawang hamlet, Probolinggo, said that smoke and volcanic ash erupted from the crater with strong pressure up to 1,800 meters above the summit crater, or 4,129 meters above sea level.
From Tuesday past midnight until morning, three eruption quakes occurred with duration between 9.44s to 17.89s and a maximum amplitude of 35-36 millimeters.
Rumbles continued to be heard from the crater, while vague firelight can be seen from the active crater.
According to the observation post, from this morning until 12.00 pm, four eruption quakes occurred with durations between 10.69 and 14.72s with a maximum amplitude of 25-35 millimeters.
The current status of Bromo's activity still remains at level III or standby.

Long-exposure photo taken on the dawn of Jan. 11, 2016 shows hot lava and volcanic ash spewing from Mount Sinabung during an eruption seen from Kuta Tengah village in Karo, North Sumatra, Indonesia.
Mount Sinabung's volcanic activity has not entirely ceased after it rumbled back to life in 2013 when thousands of people living close to the volcano forced to flee their homes after it began erupting violently.

It's one of Indonesia's most powerful volcano and one of the most active in the region, the colossus last erupted in March 2015...
Soputan Volcano Sulawesi in Indonesia spews a violent lava eruption 6 km into the air
A powerful explosive eruption occurred at the volcano during last Wednesday.
It began with a series of at least 4 powerful explosions between 20:50 on Monday and up to the next morning, producing tall ash plumes that rose 4-6 km above the volcano and drifted north.
At least some of the explosions also triggered pyroclastic flows reaching the southern base of the summit cone.
15 volcanoes on alert status in Indonesia with colossus Mount Sinabung on high alert