The Elephant in the Constitution that No One References when dealing with the Natural Born Citizen Issue Sun Jan 17, 2016 11:42 am

Admin
Posts : 107558
Join date : 2012-01-04
Location : Woodstock Nation
The Elephant in the Constitution that No One References when dealing with the Natural Born Citizen Issue 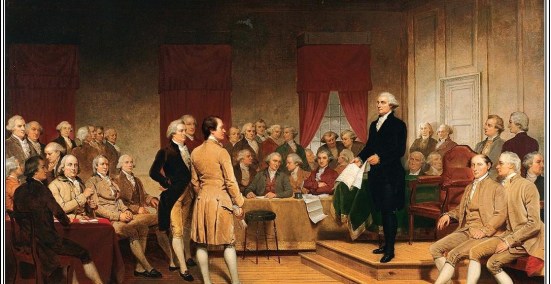 Now, there is no question that men like Ted Cruz, Marco Rubio and Bobby Jindal all meet the criteria of being at least 35 years old and have been residents in the States. There is also no question that these men are citizens. The question is, are they natural born citizens?
The other night in the debate, Ted Cruz mixed up natural born citizen and citizen just like he has in the past. However, he’s not the only one that does that. There are lots of people who claim you are either a citizen or a naturalized citizen and there is nothing else that can be added to another kind of citizen, but that’s not what the framers had in mind and it isn’t even what the Constitution presents to us.
First, as has been very eloquently presented by Publius Huldah, the founders had at least three copies of Vattel’s Law of Nations in their possession during the first Constitutional Convention and they made use of it. In that book, it is the first place that we read about a natural born citizen. Vattel writes concerning citizens and natives:

The citizens are the members of the civil society; bound to this society by certain duties, and subject to its authority, they equally participate in its advantages. The natives, or natural-born citizens, are those born in the country, of parents who are citizens. As the society cannot exist and perpetuate itself otherwise than by the children of the citizens, those children naturally follow the condition of their fathers, and succeed to all their rights. The society is supposed to desire this, in consequence of what it owes to its own preservation; and it is presumed, as matter of course, that each citizen, on entering into society, reserves to his children the right of becoming members of it. The country of the fathers is therefore that of the children; and these become true citizens merely by their tacit consent. We shall soon see whether, on their coming to the years of discretion, they may renounce their right, and what they owe to the society in which they were born. I say, that, in order to be of the country, it is necessary that a person be born of a father who is a citizen; for, if he is born there of a foreigner, it will be only the place of his birth, and not his country. (Emphasis mine)

“No Person shall be a Representative who shall not have attained to the Age of twenty five Years, and been seven Years a Citizen of the United States, and who shall not, when elected, be an Inhabitant of that State in which he shall be chosen.”


“No Person shall be a Senator who shall not have attained to the Age of thirty Years, and been nine Years a Citizen of the United States, and who shall not, when elected, be an Inhabitant of that State for which he shall be chosen.”

Do you notice something that is obviously missing from a requirement of these offices that is in the requirement for President? That’s right, there is no requirement for representatives and senators to be natural born citizens. Rather, the framers simply used the term citizen, as they did in Article II, Section 1. We can also see that they emphasized a length of time one had to be a citizen to hold that office (7 years for a representative and 9 years for a senator).
So, what is the issue, you ask? Clearly, the framers saw, for lack of a better term, “different classes of citizens.” This has nothing to do with diminishing the rights of any citizen, but distinguished who would have the privilege of serving in these offices and who could not.
The real difference here is this: natural born citizen is a fact and citizen is a legal status.
Get that?
And lest you think I’m straining at gnats here, understand that the “devil is always in the details,” or in this case, the distinction of natural born citizen and citizen. The framers have even written in such a way to make that distinction. Every other place in the Constitution, only the term citizen is used and I believe it was a clear indication of protecting an office that only one man holds and they wanted to ensure that his loyalties were not divided with dual citizenship allegiances.
My contention in this matter is not about personalities. I have addressed the issue with Obama and now I’m addressing it with those who claim to be on my side. The issue is one of principle. To mix and match citizen with natural born citizen is to undermine the very wording of the Constitution and distinction of those terms for the purpose of holding office.
This article is far longer than I desired it to be already, but I hope that it sets a foundation of understanding that the Constitution presents the two citizens as distinct. I will continue my thoughts on this in a future installment. Stay tuned.
Courtesy of Freedom Outpost.