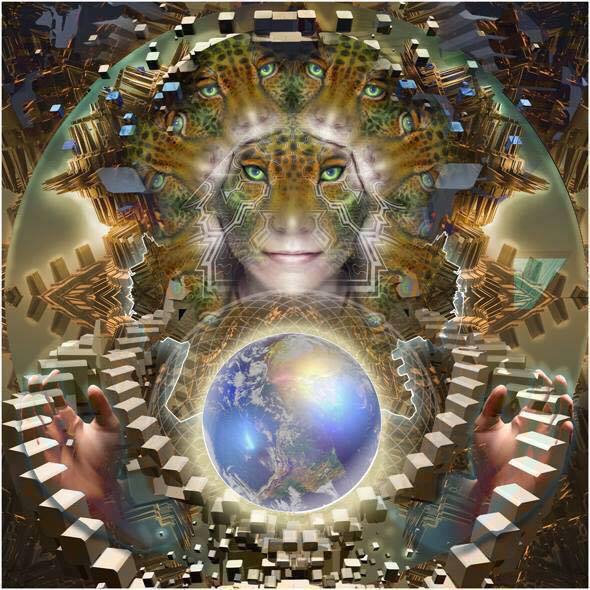 “The whole world is awakening from within & from inside out, it will eventual turn the world upside down. (was already downside up) After ALL, there will just be ONE & there will world-wide unity between ALL living beings, WE have been reaching the tipping point. Nothing & nobody will be able to stop this movement, the most powerful cosmic & universal energies is coming to Earth, actually already ready inside of us, just waiting to be triggered, activated & then permanent awakened, the world will never ever be the same again, ALL of hUmaNITY will sooner or later be going to activate their 12 strand of DNA, but for the highest & greatest good of ALL.
The 144 + 144.000 Light-Masters will be guiding & teaching ALL hUmaNITY in the right direction ONE, for the awakening of the divine to be, & to show hUmaNITY where the gates to Heaven is located, for thereafter to be wide opened, WE will truly say hello to the ascended Light-beings, the angels & the extraterrestrials.
The 144 + 144.000 Light-Masters have been given the keys (Light-Codes), now WE have the greatest opportUNITY to bring Heaven to Earth, & unite ALL as ONE.
The 144 + 144.000 Light-Masters will in the very near future (ALL is NOW) be moving permanently to ONE & the greatest city’s of the Light (there is 14) to gathering together as ONE People, ONE Power, ONE LOVE, ONE Heart & ONE Voice, to stand up for ALL hUmaNITY & for ALL hUmaNITY to witness, observe, be inspired & to learn.
The 144 + 144.000 Light-Masters will truly ascend & unite as ONE.
There will be a White Temple of ONE Inner Light & the greatest Mystery-School ever seen on Earth to every Light-Master.
The Sirians, the Arcturians, the Argarthans & some other great Light-beings, will be there to teach every of the Light-Masters, to become an even greater vision of them self. (connected to higher self) To awake the divinity from within. To become ONE with & be like the Gods & the Goddess.
If a Light-Master should work against the highest & greatest good of ALL, with harmful intentions, & do not work for the best interest of ALL hUmaNITY & do not want to work on them self, to get rid of or transform this negative energy to the ONE inner Light WE ALL hold inside of us, then the powers will be taken away from that Light-Master & will be removed from the New Earth, would have to be re-incarnated on a 3d planet again for another 26000 years.
Harmful actions & intentions well not be welcomed or allowed both in the Heavens or on the New 5d Earth in any way, & will always be returned to the sender, ALL what you send out to the universe will be returned 3 times (Nemesis).
Just do good & be even greater to ALL around you, then you will be very welcomed to live freely in the cities of the Light, & you be able will meet & be close friends with the greatest Light-beings in the the entire universe.
WE will just let the show go on, ALL hUmaNITY is involved, no ONE will be left behind or will be able to run away & hide from the New Earth to come.
The whole planet will be full of the most illuminating, intelligent & divine Light, & will soon shine brighter than 100 billion Stars. WE will truly be a Star-Nation among other Star-Nations, & will be true menbers of the galactic federation, of the ONE inner Light & of ALL the Stars in the universe.
Our divine Star-Light of ONE & unity from within, is the most powerful & illuminating force in the universe, powerful enough to transform whole worlds, & to create Stars to be, to shine & reflect our deepest inner Light by the LOVE WE hold in our hearts.
WE will now let ALL the worlds, universes & ALL living beings unite & come together, to be ONE in unity & to be LOVE in infinity.” ★
~ Kim Marcussen, inspired by Ivana LOVE, my true ONE inner Light

Source: The White Temple of ONE Inner Light