Admin
Posts : 107515
Join date : 2012-01-04
Location : Woodstock Nation
Copy and paste this far and wide this is direct intel Message from on the ground in Oregon. Ammon Bundy and 3 other militia arrested, one officer shot, FBI have aircraft flying over and have issued threats. Message sent to militias is to be prepared to repel any assault. ALL Militias to be on stand by. 9.42pm Pete Santilli now in custody, FBI blocked off all roads and are in tactical gear 9.44 1 militia shot Ryan Payne and possible 2nd militia also unconfirmed as yet 10.06 all roads now blocked and FBI in full tactical gear with aircraft buzzing overhead still 10.11 unconfirmed but reports on the ground now saying 8 militia in custody 10.12pm if they storm the refuge a full alert and call out will be issued to all Militia 10.35pm MESSAGE JUST IN FOR RELEASE: THERE WILL BE ANNOUNCEMENT ON ALL CHANNELS IN THE NEXT HOUR FOR FULL CALL UP OF ALL MILITIA, MESSAGE TO FEDS YOU WILL NOT GET AWAY WITH THIS. LeVoy Finican was unarmed and had his hands up when the feds killed him. This can go any direction. Please prepare for martial law. [10:25:07 PM] Ryan Bundy was shot. Ryan Payne was shot and is in ICU. LeVon Finican was pulled over in his truck, he was unarmed and was assassinated. 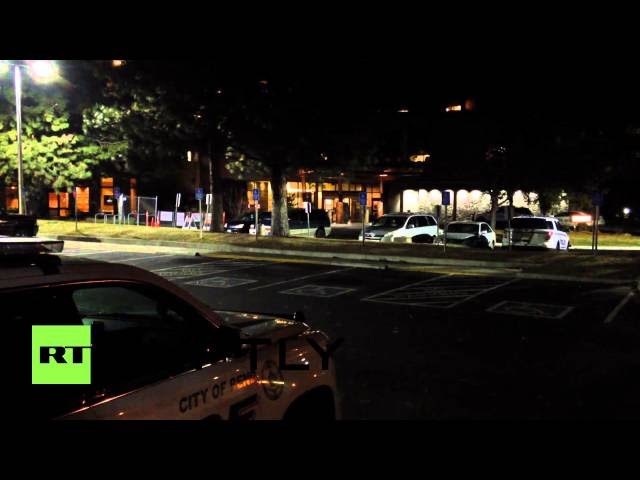 Cliven Bundy talks about his sons’ arrests in Oregon. “This will be a wake-up call to America.” (Keith Rogers/Las Vegas Review-Journal)
Cliven Bundy sits inside his ranch house 10 miles south of Bunkerville during an interview Tuesday night, Jan. 26, 2016, about the arrest of his sons and death of LaVoy Finicum, of Moccasin, Ariz. Keith Rogers/Las Vegas Review-Journal

imagevideo
By Keith Rogers
Las Vegas Review-Journal
Hours after a man was shot dead and his sons were arrested in Oregon, defiant rancher Cliven Bundy discussed the incident in an exclusive video interview with the Las Vegas Review-Journal.
“This is a total disaster to be happening in America,” he said standing in the kitchen of his home, south of Bunkerville. “My sons were there to do good.”
Check out the video above.

Posted on January 27, 2016 by lozzafun
~@ Horrific account by eye witness… Pray for these people… They were witness to murdre WITHOUT just cause… She states that Finicum was shot at least 6 times, unarmed, with hands in the are…. They were on their way to a meeting to educate the public… Would this mean they want the public IGNORANT to their rights??
https://www.youtube.com/embed/2wA18O_6dgw“>

Published on Jan 27, 2016
https://www.facebook.com/citizensforconstitution­alfreedom.news
I don’t know who the original uploader was. If anyone finds out, please pass the information along so I can give proper credit.
http://www.endtimesnewsreport.com
YouTube: https://www.youtube.com/prepare333
Facebook: https://www.facebook.com/redpill333
Twitter: http://www.twitter.com/morphonios
FAIR USE NOTICE: This video may contain copyrighted material. Such material is made available for educational purposes only. This constitutes a ‘fair use’ of any such copyrighted material as provided for in Title 17 U.S.C. section 106A-117 of the U.S. Copyright Law.

Santilli arrested by FBI - example of one young STUPID 'reporter'

Pete Santilli, 'self-styled journalist' and 'militants' supporter, among those arrested by FBI


Pete Santilli, a self-styled journalist, who started live-streaming reports of Ammon Bundy's arrest on YouTube late Tuesday, has been arrested, according to the FBI.

Santilli, 50, of Cincinnati, was arrested about 6:30 p.m. on a charge of conspiracy to impede federal officers, a felony. He was arrested without incident, according to an FBI news release.

After Santilli's initial live stream reports, authorities confirmed one 'militant' was killed and the top leaders of the refuge occupation were in police custody. Law enforcement officials had stopped vehicles Tuesday afternoon about 15 miles north of Burns, and the arrests occurred along U.S. 395, according to the FBI.


Pete Santilli: Two men down Two people have been shot and Ammon Bundy is in custody, according to a YouTube live stream report by Pete Santilli, who was speaking outside a hospital in Burns.

The arrests came on the 25th day of the standoff with the 'militants' who had taken hold of the Malheur National Wildlife Refuge. During the past three weeks, tension had mounted and federal authorities had faced repeated calls, including from Gov. Kate Brown, to take action on the protesters.

After Santilli's arrest, his live-stream kept streaming.
"I think they're going to interrogate him for a while, and that's why they grabbed him," a man could be heard saying.

"They just saw him as an information resource and grabbed him," the man said. "That's all it was."

Posted on January 27, 2016 by lozzafun
~@ Have the patriots been infiltrated or was it HOLLYWOOD all along??
https://www.youtube.com/embed/rXJgk6wr9D4“>

Truth Warriors
Published on Jan 27, 2016
http://beforeitsnews.com/alternative/…
Full credit for this BUST of “militia” in Oregon getting asked to sign Talent Release. One of them runs to shut off the live feed but too late, they are busted! Full credit for this bust goes to patriot James Farganne
https://www.facebook.com/mustard.strong
So how much of the action in Oregon is staged by Feds?
This lifestream came from Youtube Channel
DefendYourBase so all these guys need to be investigated.
https://www.youtube.com/channel/UCNe1…
James Farganne reported he witnessed these “militia” guys on this channel being very nasty and bashing Christian patriots. They also talked about shooting Feds which is usually a telltale sign of a Fed run operation! Spread this video EVERYWHERE!

The FBI released video that clearly shows LaVoy Finicum reached toward his waist — twice — before he was fatally shot by law enforcement officers.
Investigators released the full, 26-and-a-half video recorded from a helicopter overhead in hopes of knocking down conspiracy theories about the Arizona rancher’s death.

His supporters, and one eyewitness, claimed Finicum died with his hands up in surrender.
The video, at about the 9:20 mark, shows Finicum jump out of his SUV with his hands outstretched from his sides after crashing into a snowbank.
One officer approaches from the front with a gun drawn, and Finicum reaches with his left hand toward the right side of his body.
He lifts his arms again and then turns to see a second officer come out of a wooded area behind him.
Finicum again reaches with his right hand toward the left side of his body, and the second officer shoots him.
It’s not clear how many rounds the officer fired, but the rancher falls to the snow, mortally wounded.
Investigators said Finicum was carrying a loaded 9 mm handgun in his pocket.
The video does not appear to show any officers fire on the vehicle Finicum had been driving, although flashes can be seen that suggest the possibility of stun grenades or some other similar devices.
Victoria Sharp, an 18-year-old singer riding in the SUV, said she heard about 100 shots fired on the vehicle after Finicum was shot.
Another militant, who was riding in another vehicle stopped by authorities, said two of Finicum’s passengers claimed he charged officers after exiting the vehicle.
Nevada Assemblywoman Michele Fiore claimed Finicum died on his knees or lying down — but none of those accounts appear to be accurate, based on video evidence, which seems to match accounts given by law enforcement.
The officers retreated behind their own vehicles for several minutes, before gradually closing in on the SUV, and eventually the other occupants get out.
Each of them lifts their arms high in surrender and walks very slowly away from the vehicle.