Unprecedented volcanic unrest around the world in 2016

Unprecedented volcanic unrest around the world in 2016 have the authorities and scientists worried about a year without summer which will happen again and Western Civilisation is not prepared! 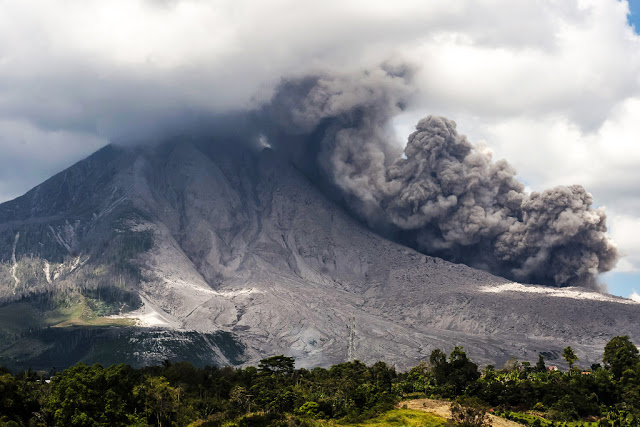 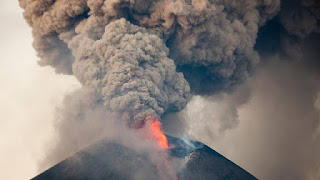 On the morning of the 2nd of January 2016, The Momotombo volcano Nicaragua, right, was the first volcano eruption of 2016!
A strong explosion occurred that morning at 04:22 local time at the volcano, covering much of the summit cone with incandescent ejecta.
It was the beginning of an extraordinary week for volcanoes around the world.....
The next day Guatemala's Fuego volcano spewed hot ash 24,000 feet into the sky, sending thick columns of ash nearly 24,000 feet (7,300 meters) into the sky amid loud explosions and extended new lava flows.
The volcano, only 30 miles (50 km) southwest of the Guatemalan capital.
The next day Indonesia joined the party as the Soputan Volcano handed us the third eruption of  this year, and it was still only the 5th of January:
15 volcanoes are on alert status in Indonesia with the colossus Mount Sinabung on high alert.
The following week, Sinabung and Bromo volcanoes erupted in 24 hours. 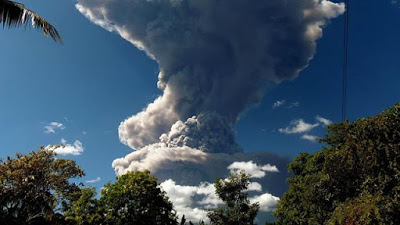 Back to Central America the very next day as the Chaparrastique volcano left, in El Salvador spouted a plume of ash and hot gases between 1,500 meters and 2,000 meters (yards) high and officials said the ash could move close to the capital San Salvador.
A day later and it's back to Indonesia as Mount Egon officials order an evacuation of residents as "an imminent eruption or disaster" was expected!

The volcano fest continued as Russia's Zhupanovsky volcano spewed ash 8 kilometers [5 miles] into the Eastern Kamchatka sky a day later.
Then on the 19th, 41,000  people were evacuated as the Popocatepetl volcano, just 35 miles from Mexico City leashed a potentially deadly eruption, after another Mexican volcano, the Colima, sent out a 1.8-mile high eruption earlier this month, leaving authorities and scientists to worry about an event which would make "Black Friday" look like a day out at Disney!


A year without summer will happen again and Western Civilisation is not prepared!

The current "period of seismic unrest is one of the largest ever recorded in a volcano globally". Iceland’s own Civil Protection and Emergency Management has said.
Imagine a winter plunged into darkness, unbearable cold, massive storms, constant flooding, raging winds and none stop rain and snow.
Throw in travel disruption, flood and wind damage to houses and infrastructure, livestock deaths, the demand on the grid system and the emergency services and you have a very plausible possibility for the western civilisation in the coming months, how do we know?
Because it has already happened, in 1816, which is known as "The Year Without a Summer!"
The summer of 1816 was not like any summer people could remember.
Snow fell in New England. 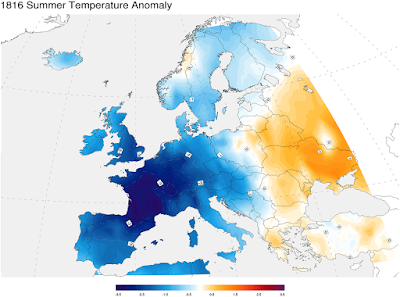 Gloomy, cold rains fell throughout Europe.
It was cold and stormy and dark - not at all like typical summer weather.
Consequently, 1816 became known in Europe and North America as “The Year Without a Summer.” What happened?
On April 5, 1815 Mount Tambora a volcano thousands of miles away on the other side of the world awoke and rumbled with activity.
The volcano exploded - the largest volcanic explosion in recorded history.
What happened in the following months can only be described as a nightmare.
Many people close to the volcano lost their lives in the event.
Mount Tambora ejected so much ash and aerosols into the atmosphere that the sky darkened and the Sun was blocked from view.
The large ash particles thrown into the air by the volcano covered the villages and towns nearby collapsing homes and buildings.
There was reports that several feet of ash was floating on the ocean surface in the region.
But the real damage came from the tiny ash particles which were light enough to spread through the atmosphere over the following months and had a global effect on the climate.
These tiny particles made their way into the stratosphere, where they could distribute around the world more effectively. 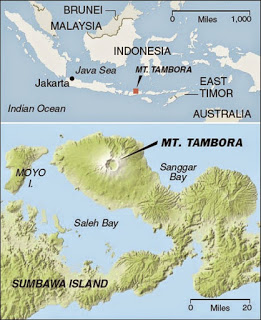 Earth’s average global temperature dropped three degrees Celsius.
That sunless summer had many impacts in Europe and North America.
Crops were killed - either by frost or a lack of sunshine.
This caused food to be scarce, and caused farmers who were able to grow crops to fear that they would be robbed.
The lack of successful crops that summer made the food which was grown more valuable, and the price of food climbed.
Scary when you consider, westerners don't deal too well with stress these days!
The demand on the grid system alone would plunge us all into darkness, flights would grind to a halt, a run on the banks would cause the already vulnerable economy to crash, shops would empty and people would start killing each other.
Its a question of when not if!

1200 people evacuated from the foot hills of Mount Egon Indonesia as the volcano status is raised to high alert!

Volcano uptick! Mount Egon Indonesia orders an evacuation of residents as "an imminent eruption or disaster" is expected!

Indonesian vlocanoes rumble with fire! Sinabung..Bromo erupt in the last 24 hours Soputan itching for a fight: 15 volcanoes on alert status in Indonesia

2016 Volcano Uptick! Soputan Volcano in Indonesia is the third eruption this year: 15 volcanoes on alert status in Indonesia with colossus Mount Sinabung on high alert

Momotombo volcano Nicaragua is the first volcano eruption of 2016!