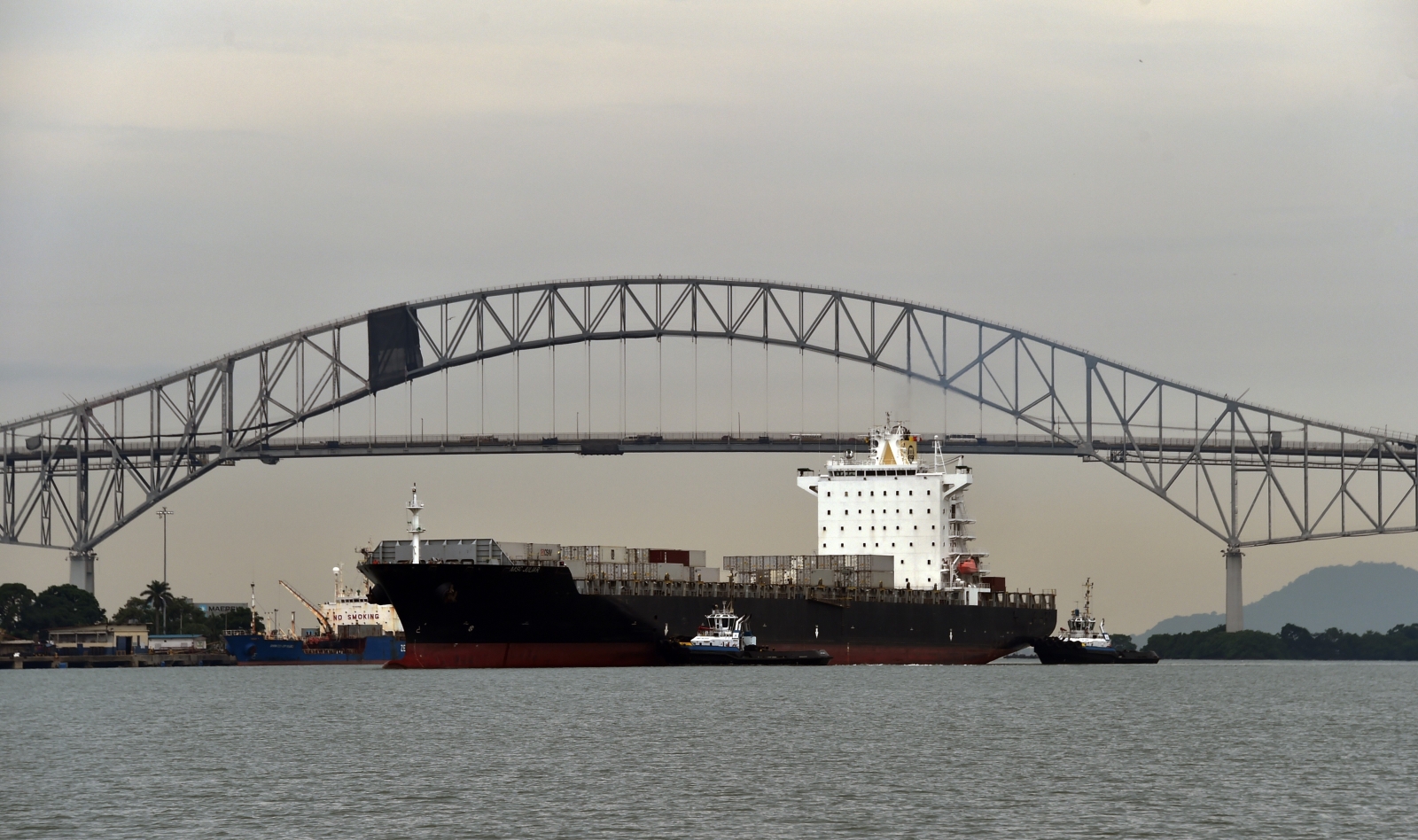 A cargo ship sails under the Americas Bridge in the Panama Canal in August 2014[size=12]Rodrigo Arangua/AFP/Getty
Concerns over a global economic slowdown were fuelled after a leading economic indicator measuring future economic activity tumbled to an all-time low on 22 January 2016. The Baltic Dry Index, which provides an assessment of the price of moving the major raw materials – such as coal, iron ore and grain – by sea by taking in 23 shipping routes measured on a timecharter basis, fell to a historic low of 354.
By comparison, the index reached 2,000 on 7 October 2012 before slumping to what was a multi-decade low of 647 due to an ongoing glut of dry bulk carriers and a marked decline in orders of iron and coal. Crucially, the index is also watched as a proxy for Chinese demand, and its decline to the lowest level since it was introduced in 1985 sparked fresh concerns that the world's second-largest economy might be coming to a standstill.
On 25 January the index remained at an all time low and suggestions China's economy might be grinding to a halt were compounded 24 hours after data showed China's annual rail-freight volume, a key economic indicator, plummeted by 11.9% in 2015 compared with a 3.9% slide in the previous 12 months. Despite the disappointing figures, however, some analysts maintained theworries over China were overdone, even though the country's economy grew by 6.9% last year – its slowest pace in 25 years.
"While sluggish by China's recent standards, even 4.3% would still be a respectable pace of growth anywhere else," said Julian Jessop, analyst at Capital Economics. "It was never likely that China could maintain double-digit growth as incomes caught up with those in West. Some slowdown was both inevitable as the economy matured, and desirable as part of rebalancing away from over-investment towards consumption." Jessop added that China's slowdown was "nothing new", indicating the country's economy had been on a downward curve since it peaked in 2007.
However, rates for Capesize class ships – vessels with a dead weight of more than 100,000 tonnes, which account for 10% of the world's fleet and carry 62% of dry bulk traffic – have plunged 92% since August to $1,563 a day, a sign some consider further proof the world's second-largest economy has hit the brakes.

More about the global economy

With US inventories at a record high in the first half of 2015 and the retail inventory-to-sales ratio, which shot up during the West Coast port crisis of 2014, rising to 1.48 in November compared with 1.42 in the previous year, concerns are not limited to China either.
Data released on 15 January showed inventories fell 0.2% in December, the sharpest decline since September 2011, although they remained at unusually high levels, and subtracted 0.71 percentage points from the US gross domestic product in the third quarter.
However, Paul Ashworth, Capital Economics' chief US analyst poured cold water on the suggestion the world's largest economy was going through a rocky patch. "After rising sharply last year due to slumping energy prices, the inventory-to-sales ratio has stabilised," he said.
"After subtracting heavily from economic growth in the second half of last year, inventory accumulation should make a broadly neutral contribution to GDP this year."
Ashworth's words were echoed by James Kidwell, chief executive of shipping broker Braemar Shipping, who said it was the shipping industry, rather than the global economy to have it the rocks, and that the sector had only itself to blame for the current ordeal. The world's fleet doubled in size between 2010 and 2013, while China's ambition to get a foothold in the commodities trade saw a sharp increase in Beijing's order intake for new ships as the country doubled its shipyard capacity.
"The dry cargo market was used to growth approaching 10% for quite a few years on the trot," he was quoted as saying by the Daily Telegraph.
"All of a sudden, you've hit a market that's gone flat. If you've got more ships than there are cargos, then freight rates are going to be weak. It's that simple."

» RECONSOLIDATION, RECOLLATERALIZATION AND REPATRIATION CONTINUES
» Bank Stocks Tumble After Trump Says "Open To Breaking Up Big Banks"
» "There are also the escalating numbers of arrest which are decimating their personnel. Everything is ready to tumble out of their grasp, leaving these dark ones without the resources,,,"
»  Reconsolidation, Recollaterization and Repatriation Continues BREAKING NEWS: Reconsolidation, Recollateralization and Repatriation Continues
» The charade continues…