The Closed Mind & The Chasm that Divides

The Closed Mind & The Chasm that Divides

The "DIVISION & SEPARATION" meme is seriously cranked on high right now, and I'm watching movements and groups being torn apart.  Not by by outsiders, but by rabid "believers" who are ready to defend their immovable belief without ever listening or considering anything else that is being put forward.

There are certain templates that are continuously used to DIVIDE the people, to break up movements and groups, and tear down systems that are not part of the "Plans" of the Controllers.  "They" have used these same templates over and over again, wielding them with repeated precision time after time... and yet, people STILL fall for it.

It is amazing to me that so many people are, or are getting, caught up in  belief systems so strongly that it becomes like a Religion... just without the god stuff. Anytime a person feels the need to defend their beliefs or personal choices with manic bashing and almost virulent denunciation of anything that goes against their belief.... it's time to take a good long look at it to see if you have been sucked into a new belief system that fosters cultish, religious-type control mechanisms.

When people can't move beyond their "Belief" system- regardless of whether its based on religion, spirituality, politics, ethnicity, science, media, advocacy, activism - or any other system that mandates a single approach and a single viewpoint....When people are incapable of even LISTENING to anything outside of their perceived "Truth", then they have shut themselves off to any new information, ideas, perceptions,  facts, or theories. (god forbid someone comes along with a different theory or a new idea within the group!).  When movements and groups are torn apart with dogmatic statements of absolutisms and radical rhetoric, then the PTB have won. At that point, all hope is lost. Because if you are incapable of accepting new ideas, new comprehensions, new information, new perceptions, then you might as well just roll over and give up.

The moment you shut yourself off from investigating and researching, the moment you close your mind to anything not within your circle of belief,  and lock yourself up against anything new, you are then missing out on the pieces of the puzzle that you just might need to be able to Comprehend what the fuck is going on.

When you get to the point that you are ready to argue with anything that is outside your accepted group/beliefs/absolutes- Blindly, without even for a single moment being open to other new perspectives and input..... then you have LOST.

When you find yourself in that place where you are vehemently demanding that people accept YOUR "truth" and YOUR "Belief", and when you are willing to insult and rage against anyone who dares to offer an alternative thought or theory, then YOU are now the one perpetuating division and separation, sometimes even while preaching AGAINST division and separation.

.... It literally boggles my mind to see how many brilliant people just keep falling into this trap.

When we can STAND TOGETHER, Without expectations or demands of beliefs or strict absolutes.....

ONLY THEN CAN WE ACHIEVE UNITY 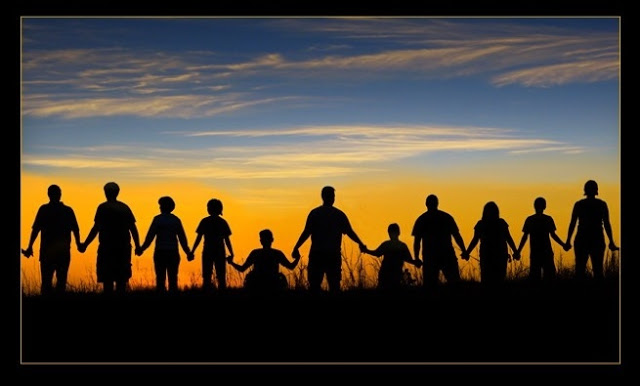 Thanks to D at: http://removingtheshackles.blogspot.com