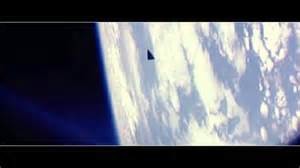 I happened upon the video below and find it intriguing, but obviously cannot confirm it is what they say it is. Keyword: “leaked”.
Yes, it looks like the massive triangle craft that people saw cruising casually over northern Arizona, the Phoenix metroplex etc., but the data on the video doesn’t say when it was or where they were.
They could have been over Area 51. It could be a video game of a virtual dogfight for all I know. It could be training. But it is interesting.
My question would be, when exactly on that evening of the sighting when thousands of people saw this ship, did this alleged chase take place?
Was it before or after the sighting?—because the ship viewers saw was in no hurry whatsoever. In fact, when I read the accounts, I felt it was “arrogantly” cruising over the city—and the benevolent Galactics don’t do that. They don’t come here unless they need to protect us or do research, and they try to stay out of sight.

This story doesn’t make sense. No ship like that could enter Phoenix airspace, with all the airports we have, and dozens of planes in the air at any given moment, and no one know about it, yet the military and Sky Harbour airport denied seeing it.
I think they knew, were expecting it, and just wanted to see what people would say. It seems very likely it was not only a psychological/receptivity test for the public, but after seeing this video, possibly a training mission for the military, as well.
A similar ship returned to Phoenix a few years later for second evening stroll. Another training mission?
And why release this now? Disclosure? Or for the fear factor? It’s obviously not technology most people are aware exists, and the article reads…

The report claims additional footage of multiple civilian casualties has been obtained.

Civilian casualties? Sounds like scare tactics to me. I heard nothing about civilian casualties in all the discussions and research done on this event.
I think this serves to support the fact that most of the “space ships” are not alien but domestic, and part of the secret space programs. This is what they do with taxpayer dollars. Trillions every year into a bottomless black hole.  ~ BP


Uploaded by dcollins on Jan 13, 2016 Views: 24940
Classified military footage of the Phoenix Lights has recently been leaked by a former Luke Air Force aviator.
The HUD footage reportedly captures never before seen cockpit footage of F-16 and A-10 Warthog fighter jets in action the night of the Phoenix Lights.
The video depicts military and unknown craft on the night of the mass sighting over Phoenix in 1997. Luke Air Force base has received numerous inquiries and requests but has remained silent on the footage.
The report claims additional footage of multiple civilian casualties has been obtained.
#disclosenow
http://fightersweep.com/3614/aviator-leaks-dramatic-ufo-hud-video/
Source