OUT OF MIND » TRUTH IN CONSPIRACY THEORIES? » HISTORIES MYSTERIES » The Forbidden History of the Elongated Skulls 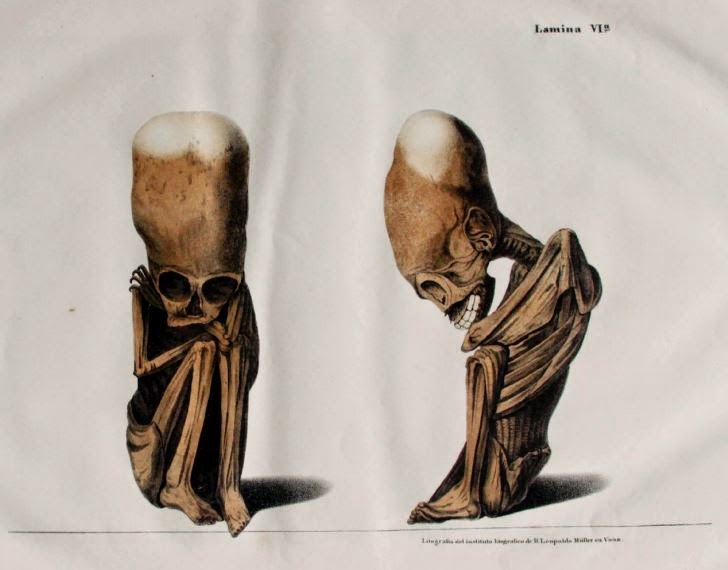 Mark Laplume is an artist and independent researcher who has been engaged in making reconstruction drawings of ancient people with elongated skulls.

Mark’s reconstructions were illustrated in an article on suppressed evidence challenging the Artificial Cranial Deformation paradigm as the only way of explaining elongated skulls.

Mark now shares some of his insights into the mystery of elongated skulls with the readers of Ancient Origins. 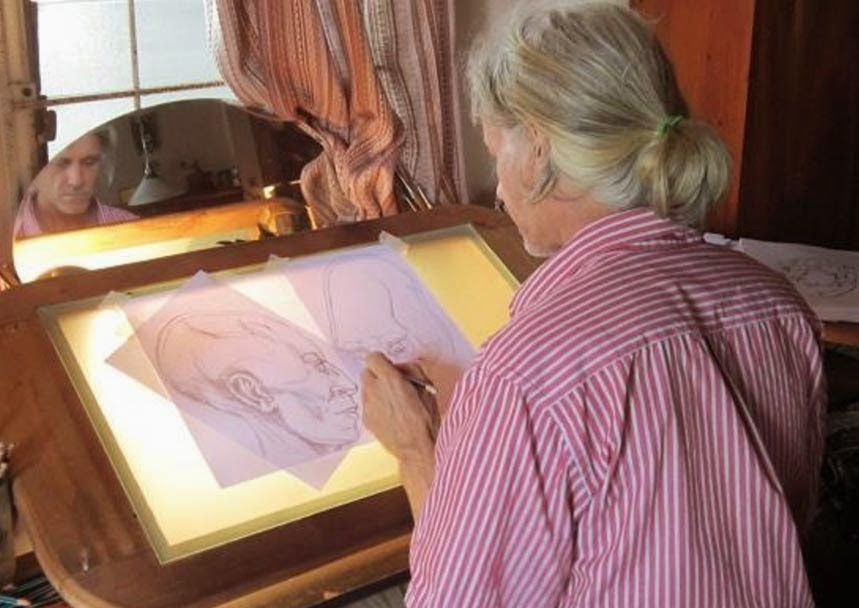 IG: Mark, how did you become interested in elongated skulls and why did you decide to start reconstructing the appearance of these people?

In 2006, when I first downloaded Google Earth, I looked around at places I knew and then made a bee line to the south end of Lake Titicaca. I was blown away by what I saw.

The ruins of something vast covered every hilltop for miles in all directions. I knew something incredible had gone on there, but put it out of my mind after finding no interest by anyone I tried to share it with.

Evidence of ancient civilization in Bolivia. Credit: Google Maps
About six years later, I saw one of Brien Foerster’s posts showing elongated skulls. I was lucky enough to reach him and talk a little bit about what I was looking at.


Looking at the images of the skulls made me curious as to who these people were and how they looked. There were almost no interpretations of their appearance and almost nothing about their history.

My momentary sense of inclusion made me wonder what I could do to help him to advance our understanding of these people. Although I had not picked up a pencil in 14 years, I felt sure I could draw them to recreate their faces, to see what they looked like.

I'd quit art school, but continued to pursue art in various ways for 18 years, culminating in working on large sculptural projects in the mid-nineties, at which point I stopped drawing and making art.

Brien Foerster with an elongated skull. Image from his Facebook page
Meanwhile, back to the skulls, I started doing online and archival research, collecting the images of elongated skulls, and drawing. To date, I have done over 5,000 drawings and collected more than 18,000 photos of skulls, mummies and related artifacts.

While working with this incredible data and making drawings, the lack of understanding, history and myth of what these people were and how they looked did not lend a sense of legitimacy to the attempt.

There were so many unanswered questions I wondered if perhaps this is why so few people could involve themselves with this kind of project. It’s like a wall so big, you don’t notice it or don’t want to admit it is there.

Mark Laplume’s artistic interpretations of elongated skulls
from Bolivia (top) and Paracas, Peru
When I began this study in 2011, the count of skulls was known by very few people, who were actually aware of this. They estimated that there were a few hundreds of skulls.

But through web searches, I’ve found literally thousands of skulls! There are also about one thousand skulls in Romania, Bulgaria, Ukraine and Chile which are not yet accessible to the public.

Even more skulls remain unknown, as they have not been photographed (or at least are not publicly accessible) and therefore, not available for public viewing in Chile and Peru.

Elongated skulls in a museum in Romania
IG: Academic researchers are generally dismissive of elongated skulls. They see them as nothing but artificially deformed human skulls - a result of deliberate head-binding to achieve a flattened shape. In addition to this 'artificial head-modification' thesis, they sometimes also cite a medical problem called Hydrocephaly. Why, do you think, academics maintain this view? What is their evidence?

Elongated skulls are never spoken about without terms of head-binding. It’s the hole in the bucket refrain from which there is no escape. But now there are also those, and I mean not only researchers but obviously people, who’ve woken up to the layers of lies we’ve been fed since the get-go.

Many who look at the evidence of anomalies in the skulls, are not satisfied with believing in the cranial modification dogma. People like Brien Foerster, Lloyd Pye, Graham Hancock, not to forget Michael Cremo, examine and record evidence, rather than the stories made by earlier researchers, textbooks, and other gate keepers of conventional perspectives. The point is to keep asking questions.

The verbal portrayal of "binding" is a collective projection. The reality is that 99% of those who speak about it have never examined an elongated skull first-hand. I don't know how it's so prevalent except that it's repeated all the time.

The usual approach to elongated skulls is dominated by concepts, but the skulls’ shapes are not linguistic, they are morphologic. My work has been an attempt at making a soft rebuttal by making public my process of looking-and-drawing, which involves seeing.

I don’t rely on classical authorities. In my work, the skulls are doing the talking. Talking is a projection, while seeing is receiving. And no one can answer questions which you alone can actually experience at the level of seeing.

This is why my approach to elongated skulls is not conditioned by the dogma “elongated = deformed”.

Left: Mark Laplume’s interpretation of ‘Detmold Child’.
Right: Detmold Child on display (public domain)
IG: Are there any significant skulls that leave no doubt the 'artificial deformation' paradigm is wrong? How are these skulls different? Are there differences among elongated skulls themselves? Is it possible to group them according to shape and other features?

To your first question - take a look at these skulls exhibited at the Ica Museum in Peru.

Elongated skulls from the Ica Museum in Peru
There are problems with the official story, which dates back to Hippocrates, defining Huns as having been bound. It claims that all skulls are merely artificially modified skulls of the modern looking humans.

The fact is, many had larger eyes as well as a 25% larger brain case than modern humans. Also, they had higher ears, up to ½ an inch higher than normal.

Paracas skulls (left) and modern human skulls (right)
Cranial sutures are different. There are mysterious holes at the back of the skull. An extra plate above the Occipital, known as the “Inca bone”...

The Paracas skulls have variations in the occipital bone compared
to modern-day human skulls. Images by Lainie Liberti
There is a problem with infants too, which have been found in Peru and the Andes with a tooth-set of a three year old modern human child. Most parents will know that molar teeth in an infant sized toddler is unheard of.

Infant skull from Cusco, Peru, and Infant/Child skull from Tiwanaku, Bolivia
In South America, there are different categories or types. It does seem so, but I don’t get into (Spanish) terminology. For me, it’s just another way to separate from seeing the skull’s individual characteristics.

I tend to say that “they had range”, like the unexplained red head that appears randomly in a family line. Similarly, the Elongated, the Huns... were wild in this way. They had a greater range, it seems, of morphological expression.

Image illustrating one of the "types" of elongated skulls
In terms of the connections between the Americas and Eurasia, elongated skulls from these areas are so similar that sometimes the only way to distinguish them from one another is by the background, or patina, on the skulls.

IG: Are you relying on any anthropological or forensic methods of facial reconstruction? Or more generally – how do you visualize the appearance of these people?

Organs come together to form the overall “body” of a head. Drawing the same skull from different directions tends to smooth out mistakes. The form arises in unison with the elements of bone, muscle and skin. Mainly, bones define much of a person’s face, so accuracy, we would hope, is inevitable.

IG: How do you fund your research? What are your future plans?

There’s a definite need for funding. When and if funding becomes available, it will greatly facilitate research and presentation of elongated skulls and it would increase our understanding of the historical significance of these people.

This has been somewhat of a slow awakening, but I think my drawings have gotten better. They were not good at all at first, although they were something at a time when we had almost nothing at all to look at.

My drawing work continues. Now I hope to gain research access to the archives of museums in Boston, Philadelphia and Chicago. To look at skulls from Peru firsthand and, hopefully, photograph their collections of Peruvian skulls.

I am also working to produce a book of illustrations, presenting images of skulls and reconstruction drawings. In order to get a more definite understanding, studies done in Eastern Europe as well as the Andean region will be required.

IG: Thank you for sharing your story and your work.  We look forward to seeing more of them on RootRaceResearch and hope to continue our conversation soon.

OUT OF MIND » TRUTH IN CONSPIRACY THEORIES? » HISTORIES MYSTERIES » The Forbidden History of the Elongated Skulls