Gagging at the Circus of Killer Clowns 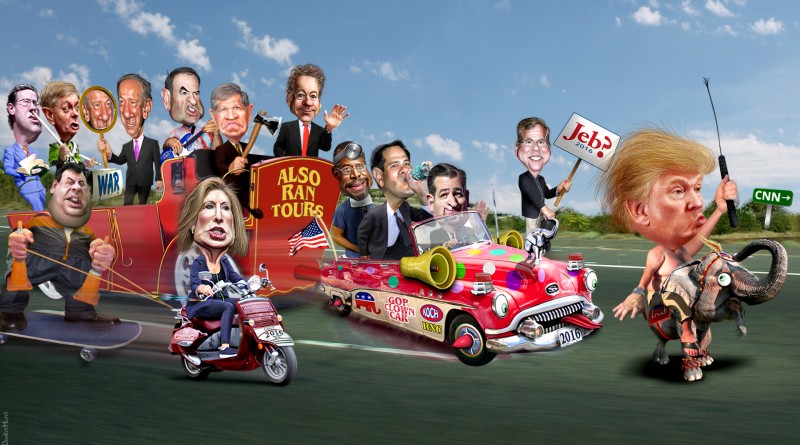 Gagging at the Circus of Killer Clowns

Zero chance for peace
from totally corrupt crop
of presidential wannabes
I know we shouldn’t put too much faith in the results of an Iowa caucus, seeing that one year citizens of that Cornbelt state gave an overwhelming victory to an inane Arkansas ex-governor named Mike Huckabee, whose most infamous gaffe was defending a politician who suggested there actually was a category called legitimate rape.
That was 2008. In 2012, Iowa caucusers got even stupider, and made their choice Rick Santorum, a Bible-thumping dodo who became infamous for telling rape victims to make the best of a bad situation.
But seeing Ted Cruz and Marco Rubio, the New World Order’s dream ticket, gang up on outsider Donald Trump and win the Iowa caucus once again bodes poorly for anyone seeing the faintest trace of hope that this 2016 slate of candidates would offer some possibility of either honesty or sanity. 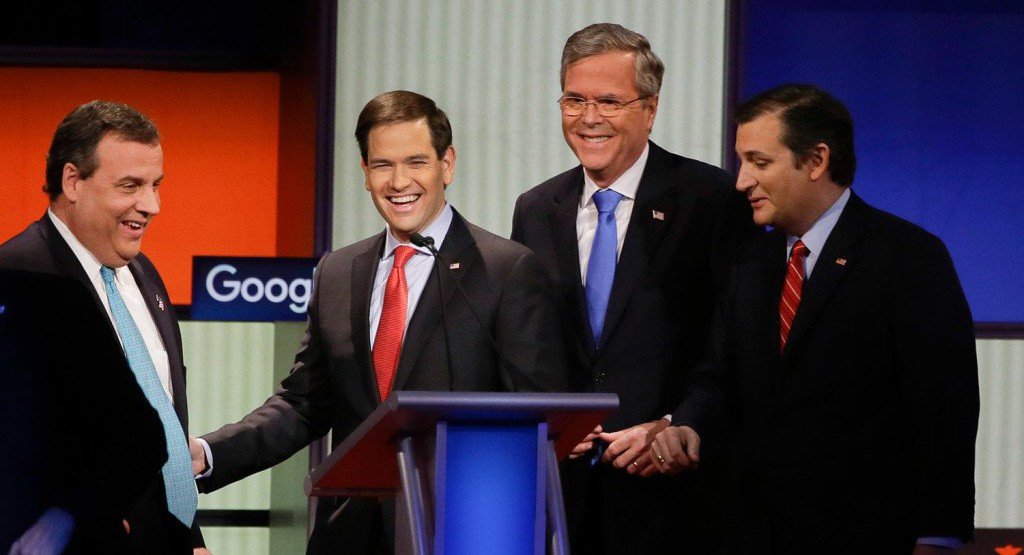 The idea put forth by some that Microsoft manipulated the recent Iowa vote to deprive Trump of his predicted victory is about as relevant as noting that in the 2000 election when Bush the Younger won the Florida vote by 537 votes, and among Al Gore’s vote totals was the striking official number of minus 17,000 votes in Volusia County, an abomination that was allowed to stand.
For the fact is, Gore has proven as immoral a tyrant as Bush, and eight years later, billionaire Mitt Romney would have been at least as aggressive in Obama in presiding over criminal invasions of nearly helpless countries, as well as the fleecing and poisoning of the American electorate.
And I don’t know how much better Trump would be, who once made a campaign ad for Benjamin Netanyahu, as he talks about building up America’s mighty criminal military.
I don’t know how far back you have to go — perhaps to JFK? — to find a president who was actually working for the best interests of the American people. All the others took their orders from the same kind of people who are running the show today, rich Jewish billionaires like Sheldon Adelson and George Soros who have convinced generations of American males to bend over and pucker up for kosher cash. 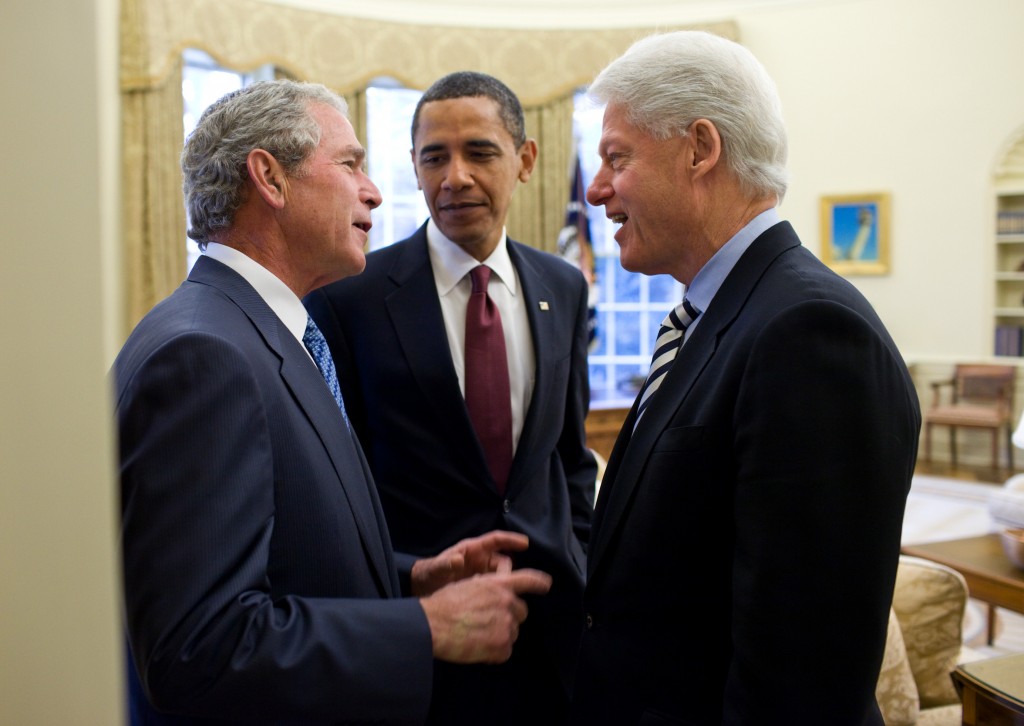 There is no shortage of absurd anomalies that render the U.S. presidential race as nothing more than a TV game show of the lowest order which most Americans unbelievably continue to believe is serious business. This is how depressingly superficial American citizens have become. One need only consider that for the last 16 years, closet homosexuals have lived in the White House, and for eight years before that a serial philanderer lived there with his lesbian wife who is now herself running for president (if she can successfully avoid indictment for a seemingly limitless number of crimes).
Perhaps deepest in the bowels of America’s ugliest secrets is the cabal of doctors, judges and health administrators who funnel children into the dirty hands of rich men. Thousands every year. This is even more secret than the 9/11 coverup, poison medicines protected by laws, and the trashing of the environment that makes sickos rich and those who would be healthy surrounded by new diseases that are invented nonstop by those who contribute to all political candidates.
It’s awfully difficult to raise honest children in this immoral environment, particularly when the school systems have long been taken over by Jews enthusiastically eager to progressively diminish school curricula down to autistic levels, and redirect the emphasis of college educations to transsexualism, child molestation and money laundering.
One may measure the dramatic decline in the integrity of America by the pathological presence of these disgusting perverts in positions of power.
And one may also gauge the amoral self-destructiveness of America’s younger generations and their ever growing drug addiction as a direct result of gutter behavior of U.S. leaders over the past few decades. 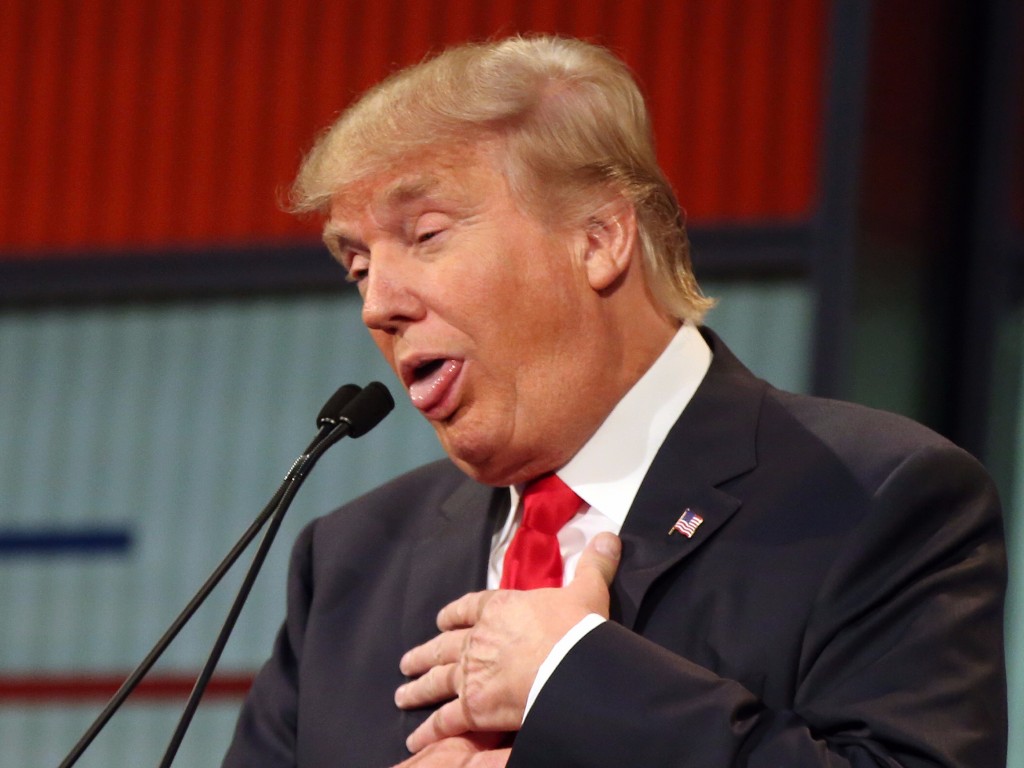 It is preposterously laughable that casino magnate Donald Trump is the most moral candidate in the 2016 race. This is the horrifying level to which the USA has sunk. The Donald himself is only an amusing illusion, because the one lethal fact still stares us in the face — every single announced candidate in all the major parties will hasten our day of destruction, continue the murderous policies of their predecessors, and continue down the bloody path dictated by the Jewish world plantation owners of trading lives for money.
And that would be trading OUR lives for OUR money.
We’re so desperate for good political news that at least we can cheer the pathetic performance of Jeb Bush, hopefully the last of his ignoble line of pervert traitors, who resorted to paying feckless Iowans $25 per head to show up at his rally before the caucus, an effort which gained him 3 percent of the vote. Of course a number of people who attended claimed they didn’t get paid, which fits right in with an American population who insist they didn’t get their money’s worth either out of either Bush presidency.
And we can roll our eyes at the news that Marco Rubio was a gay boy in a chorus line before marrying an NFL cheerleader to demonstrate his hetero credentials. At least it was not a man he married! But if elected president, he would be the third fag inhabitant of the White House in a row, sending a wonderful message to the young boys of America that the decrepit Jewish pederasts in charge of the U.S. political process would thoroughly enjoy. 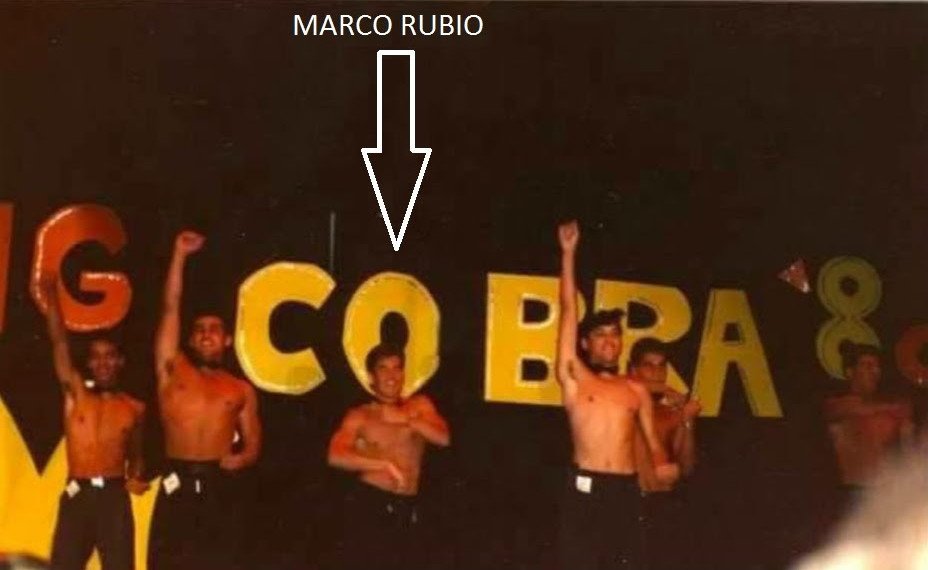 As someone who once, as a little boy, saw Harry Truman drive past his house in a yellow Buick convertible while campaigning for Adlai Stevenson, I have yet to see one presidential administration that was not utterly corrupt and utterly intent on betraying the American electorate so they could be enriched by their Jewish masters.
Yes, you could exclude JFK from that list had he not stolen his election with the help of the Chicago machine, a machine now ruled by the Jewish henchman Rahm Emanuel who has taken the guns from the people and elevated his city’s murder rate to an all time high, just the way the Jews want it, just like Palestine, really.
The intent of all these bought-off politicos, we can see now as we are overun by Third World savages interested only in plunder, was to destroy the United States so everyone could come under the control of the Jewish corporations, which is the situation we see before us today.
No benefits, no overtime, no decent place to go home to, medical bills you can never pay. The way Jews want America to be, and all sorts of bogus candidates eager to achieve that objective.
The litmus of legitimacy
On our present course, Americans will never regain their freedom, if a president is not elected who will provide definitive answers to the following questions that remain unanswered.
1. Who planned, executed and covered up the 9/11 disasters? The undeceived among us know for sure it was the Jewish overseers who control the government, the money and the law enforcement apparatus in the United States.
But now another generation has passed through the public school metal detectors, fed on the lies of the neocons, the Communists and the LGBT automatons. An endless series of contrived false flag atrocities have manipulated the lesser lights among us into believing that we should relinquish our weapons and trust in the government to protect us.
Doctors are the worst of these lesser lights. They are still telling us that flu shots are good for us when everybody knows they are killing us, just like the Tdap vaccine is suspected as the culprit in the so-called Zika epidemic.
Doctors say that’s absurd. But can you believe them?