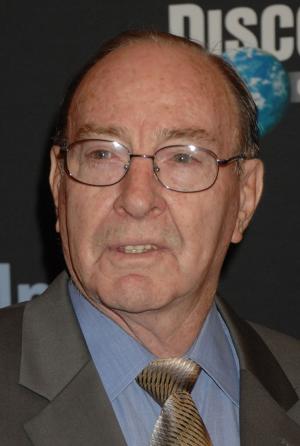 FILE - In a Sept. 5, 2007 file photo, former astronaut Edgar Mitchell arrives for the premiere of the …
MIAMI (AP) — Apollo 14 astronaut Edgar Mitchell, who became the sixth man on the moon when he and Alan Shepard helped NASA recover from Apollo 13's "successful failure" and later devoted his life to exploring physics, the mind, and unexplained phenomena such as psychics and aliens, has died in Florida. He was 85.

Mitchell died Thursday night at a West Palm Beach hospice after a short illness, his daughter, Kimberly Mitchell, said. Mitchell's passing coincides with the 45th anniversary of the Apollo 14 mission from Jan. 31-Feb. 9, 1971.
Mitchell, one of only 12 humans to set foot on the moon, was not a typical strait-laced astronaut: In later years, he said aliens visited Earth and faith healers were legit. He attempted to communicate telepathically with friends at home during his Apollo mission. He had an "epiphany" in space that focused him on studying physics and mysteries such as consciousness.
"What I experienced during that three-day trip home was nothing short of an overwhelming sense of universal connectedness," Mitchell wrote in his 1996 autobiography. "It occurred to me that the molecules of my body and the molecules of the spacecraft itself were manufactured long ago in the furnace of one of the ancient stars that burned in the heavens about me."
In an emailed statement, NASA Administrator Charles Bolden called Mitchell, "one of the pioneers in space exploration on whose shoulders we now stand."
Mitchell's passion for exploration led him to become an astronaut, and he joined NASA in 1966. He helped design and test the lunar modules that first reached the moon in 1969 with Neil Armstrong and Buzz Aldrin.
Shepard, the first American in space in 1961, picked Mitchell to be on Apollo 13's three-person crew. But they were bumped to the next mission so Shepard would have more time to train.
Apollo 13's astronauts were nearly killed when an oxygen tank exploded as they neared the moon in 1970. They made it home safely, but never set foot on the moon. A year later, Shepard, Mitchell and Stu Roosa were the first crew to try again amid falling support for the moon missions from President Nixon, Congress and the public.
"Had we blown it, had it failed for whatever reason, that would probably have been the end of the Apollo program right there," Mitchell said in 1997.
Fortunately, their mission, the third lunar landing and Mitchell's only trip in space, was a success.
Shepard collected about 95 pounds of samples in more than nine hours walking the lunar surface. They showed for the first time that astronauts could walk long distances on the moon, covering nearly two miles on their second expedition on the surface. That proved the crews of later missions could walk back to their spacecraft if the buggy-like Lunar Rover broke down.
Their mission was best known to the public because Shepard became the first and only golfer on the moon. Mitchell joked when Shepard duffed his first shot: "You got more dirt than ball that time." Less well known was that Mitchell made the only "javelin" throw on the moon when he tossed an unneeded metal rod.
But Shepard and Mitchell almost didn't make it to the surface because of problems in the lunar module.
First, a loose piece of metal in a switch triggered an abort signal as they prepared to travel down to the moon. Had the descent engine been on at the time, the module would have automatically aborted the landing. They traced the problem's cause by tapping on the switch with a flashlight and a pen.
Computer programmers back home wrote instructions to get around the abort problem and Mitchell entered them with just minutes to spare. Shepard later wrote that Mitchell remained "Mr. Unflappable" during the scare.
Once they started for the surface, though, the landing radar wasn't working correctly. Shepard and Mitchell agreed to take the dangerous and rule-breaking step of landing without radar, but didn't have to when the device started working just in time.
It was the telepathy experiment on the ride home that would give Mitchell notoriety. Even before he left, he told The Associated Press about his fascination with psychic phenomena and extrasensory perception and that he thought humans weren't the only intelligent life in the universe.
Those interests almost got him removed from the mission, said Gene Cernan, the last man to walk on the moon and backup commander for Apollo 14. Cernan wrote in his autobiography that despite Mitchell's impeccable skills and vast intelligence, flight crew director Deke Slayton and Shepard were bothered with the fascination.
Mitchell claimed the experiment was a success, but most press reports dismissed him and some colleagues shunned him.
Edgar Dean Mitchell was born Sept. 17, 1930, in Hereford, Texas, and grew up working on his father's cattle ranch in New Mexico. He joined the Navy and got a doctorate from the Massachusetts Institute of Technology before joining NASA.
He left NASA in 1972 and founded the Institute of Noetic Sciences, which is dedicated to exploring the mysteries of the human mind and the universe. He also searched for ways to link the spirituality of religion with the hard facts of science.
In later years, he claimed the U.S. government covered up evidence that aliens had landed here. He also tried to prove that the supposed psychic spoon bender Uri Geller and faith healers were legit.
In 2011, he became embroiled in a legal fight with NASA over his plans to auction a 16mm camera he had brought home from the moon mission. The camera had been bolted to the l lunar module and would have been left on the moon if Mitchell hadn't removed it.
Although Mitchell contended it was a gift, NASA sued to stop the auction and eventually Mitchell agreed to donate it to the National Air and Space Museum in Washington.
___
Former Associated Press staff writer John Pain contributed material to this story.

By Alfred Lambremont Webre
VANCOUVER, BC – Dr. Edgar Mitchell, historic astronaut, consciousness pioneer, and Exopolitical Explorer, has passed over into the Interlife. According to Palm Beach county’s WOKV, “Dr. Edgar Mitchell, who was part of the Apollo 14 space crew, died late Thursday in West Palm Beach, according to his family.
“Mitchell, 85, lived in suburban Lake Worth and died at a local hospice at about 10 p.m. Thursday [Feb. 4, 2016], his daughter, former West Palm Beach City Commissioner Kimberly Mitchell told The Palm Beach Post.
“Mitchell’s ex-wife, Anita Mitchell, is a former Republican Party chairman for Palm Beach County and is currently former Florida governor and presidential candidate Jeb Bush’s Palm Beach County campaign chairman.”
Dr. Carol Rosin Tribute
Dr. Carol Rosin, founder and President of the Institute for Cooperation in Space in which both Dr. Edgar Mitchell and this reporter served, stated, “Apollo 14 astronaut Edgar Mitchell, the sixth man to walk on the moon, died last night in West Palm Beach at age 85 after a short illness. This week marks the 45th anniversary of his 1971 mission to the moon. I would love to respectfully share a very personal MESSAGE FROM EDGAR with you in his PEACE LIGHT LOVE.
“Please scroll ahead and start to listen at minute 32.44

“I will pay tribute to my decades long time friend today Feb. 5, 2016 on American
Freedom Radio at 3:00PM Pacific USA.
It will be archived on www.americanfreedomradio.com
Dr. Mitchell sought open contact with extraterrestrial civilizations
Dr. Edgar Mitchell actively sought open public discussion, research, and contact with extraterrestrial civilizations, which he concluded were in our Earth’s environment.
Here is the video of a Symposium that Dr. Edgar Mitchel participated in on the GeoSocial, Societal, Economic, Political & Spiritual of Open Extraterrestrial Contact, featuring Dr. Edgar Mitchell, Simon Parkes, Alfred Lambremont Webre, JD, and Tolec (Chris).