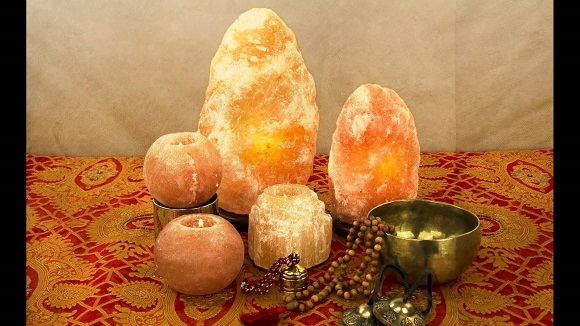 Millions of years ago the Indian landmass collided with Asia and formed the Himalayan Mountains, which have been growing ever since. The immense range is where 9 of the world's highest peaks are found, one of which boasts the highest elevation on Earth, Mount Everest. Over a thousand miles away from Everest, in northern Pakistan, lies the foothills of the Salt Range. A shallow sea located there evaporated long ago, leaving behind tons of crystallized sea salt that's buried deep below the mineral rich mountains. This is where most of the Himalayan pink sea salt is found and mined.


The salt mines have been open and active for hundreds of years, but the immense health benefits of Himalayan salt have only recently been widely recognized. The natural underground formation of the beds led to over 84 trace minerals being added to the salt including calcium, copper, sulfates, zinc, magnesium, iron and more, making it the most mineral dense type of salt in the world.


There are a number of excellent health benefits that Himalayan salt offers and you need not eat it to get all of them. Lamps made from the salt can do wonders for your health and home thanks to their natural air cleaning ability. The salt lamps generate and give off negative ions which are oxygen ions that have an extra electron attached to them. They are found in nature near rivers, waterfalls, and other bodies of fresh flowing water.


It's believed that when we breathe them in they react with our bodies and produce positive effects. When people report feeling happier, clearer, and more refreshed around these water sources, it's generally attributed to the negative ions they are taking in. Think about and imagine the fresh air that comes after a thunderstorm, that air feels so good because it contains vast amounts of negative ions.


Another effect that negative ions have on our surroundings is that they can bond together with positive ions and thus neutralize them. Positive ions do not have a positive effect on our bodies. They are what TVs, microwaves, and other electronic devices create and put off and can be harmful to us. Some people are affected more than others and may experience headaches, stress, allergies, and sleep issues from them.


Placing a salt lamp in your home greatly reduces the presence of positive ions in the air, while simultaneously increasing the amount of negative ions. Thus, they cut down on the harmful silent effects electronics have on us, which are often overlooked. The lamps are an easy way to make your environment and the air you breathe cleaner. The following health benefits are what people report experiencing soon after using salt lamps, they include help with:


The lamps leave your mind, body, and health all better off and all you have to do is switch a light on. To truly harness the healing power of salt lamps they should be placed all throughout the home and especially near electronic devices. While one single lamp will have a positive effect, it won't be strong enough to impact your health, so make sure to use several. Also, eating pink Himalayan sea salt is even more beneficial to your body than regular table salt, but that's a whole other story. Watch the video below for more information and try out a few Himalayan salt lamps if you haven't already done so yet!