The Multilateral/Multipolar New World Order will seem like heaven… at first Wed Feb 10, 2016 9:17 am

When the New World Order finally comes into full public view, it will look attractive and inviting… 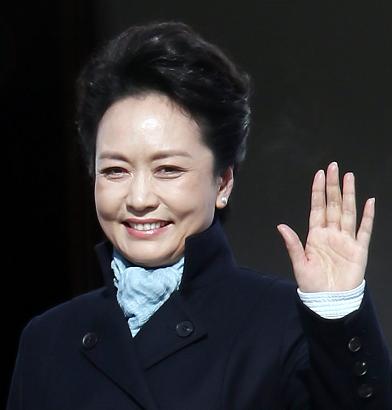 …not ugly and scary… 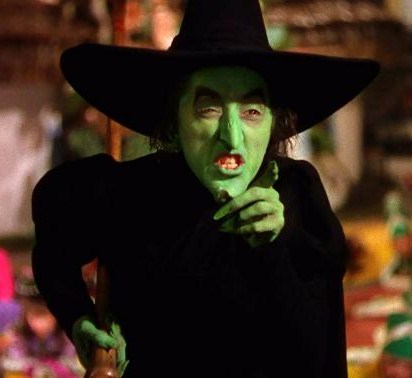 Yesterday, a reader wrote me the following…
“I am optimistic that things aren’t as bad as they seem, because enough people are able to find their way out of the infantile drama you have portrayed, and the illuminati are simply tripping up as they flounder and we show their flailings about. We actually have a choice down the middle, and that is to clean up the corruption in the international financial system and take back our world. We will not have a one world currency. We will abolish legal tender laws, and use the world’s gold on deposit in the trust called the Global Debt Facility to replace paper currencies in each country with national currencies in aurum, putting the central banks into bankruptcy in the process.
Most of the shills you have portrayed in your blog have been trying to keep this from happening, but thanks to a very accurate power transition model from the Department of Defense, we know there is a 95% chance that the people in each country will be able to clean up their corrupt politicians who will be powerless to prevent the clean-up.”
I don’t know if the reader realized it or not, but what she wrote is actually a description of the New World Order. So upon reading it, I realized the need to explain what the NWO will look like when it’s unveiled, and to emphasize a critical point:
The globalists are in the process of running a problem / reaction / SOLUTION scam on us, not a problem / reaction / PROBLEM scam.
This means that when we reach the end result of this transition process, the NWO will look like the SOLUTION to all our problems, not another PROBLEM (such as a dark, scary fascist regime) we need to overcome. It will appear as though the corrupt have been defeated, World War 3 has been stopped, all regional conflicts have been resolved, biowarfare against the population has been halted, poverty has been alleviated, debt money has been abolished, secrets have been revealed, and so on and so forth. And the masses, after having been force-fed negativity and conditioned to expect a scary NWO for so long, are expected to be so overcome with joy that they’ll willingly embrace the New Order.
That’s how a problem / reaction / solution scam works when you’re using it to create a New Order for the entire planet: 1) you intentionally create an overwhelming number of terrible problems, 2) you make sure the public is fully aware of all those problems (by carpet-bombing their consciousness with mainstream and alternative media coverage of all the ills in the world), then 3) you present them with the solution to all their problems (the NWO). In that final phase, you don’t present them with something ugly and scary; you give them something attractive and inviting. And once they have accepted it and come to depend on it, you start tightening the screws again.
In light of this, let’s have another look at the aforementioned reader’s expectations, one-by-one…
> We’ll “clean up the corruption in the international financial system.” This statement presupposes that the international financial system started out as something good and became corrupted, and such a view has no basis in reality. The international financial system was purpose-built as a slavery system by the International Central Banking Cabal. It cannot be “cleaned up” or “reformed” into something good any more than a meat grinder can be reformed into a cow uterus.
The international financial system IS corruption; it is corruption incarnate. We must simply walk away from it and build our own system of trade, starting at the local level with our own neighbors, then networking peer-to-peer until there is a true (decentralized) global community. If we don’t build our own financial system, we will use theirs by default, and then we’ll be stuck in yet another of their growth and harvest slavery cycles.
> “We will not have a one world currency.” Of course we won’t. The NWO plan does not call for a one world currency — at least not at first. It calls for national currencies which will be backed by a supranational reserve currency currently known as the SDR. Over time, the SDR will be expanded into more and more areas that are currently the domain of the national currencies. This process is expounded upon by future IMF Director and current Governor of the People’s Bank of China Zhou Xiaochuan in his speech titled “Reform the International Monetary System“…

As the SDR becomes more and more used as an alternative to national currencies, the globalists expect the people to embrace it on their own accord. The Economist explained this back in 1988 with an article titled Get ready for the phoenix… 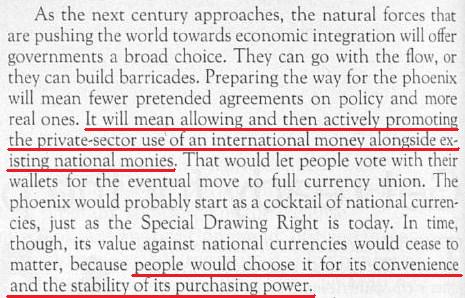