OUT OF MIND » THE INSANITY OF REALITY » GOVERNMENTS & THE NEW WORLD ORDER » Venezuela Is Out of Food: Here’s What an Economic Collapse Really Looks Like

Venezuela Is Out of Food: Here’s What an Economic Collapse Really Looks Like 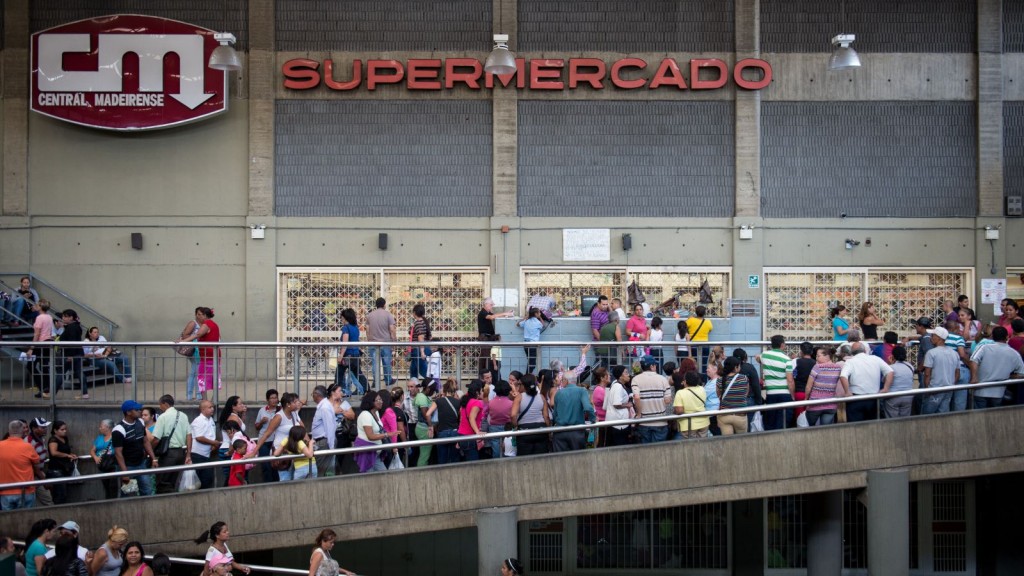 By Daisy Luther
Venezuela is out of food.
After several years of long lines, rationing, and shortages, the socialist country does not have enough food to feed its population, and the opposition government has declared a “nutritional emergency.” This is just the most recent nail in the beleaguered country’s slow, painful economic collapse.
Many people expect an economic collapse to be shocking, instant, and dramatic but, really, it’s far more gradual than that. It looks like empty shelves, long lines, desperate government officials trying to cover their tushes, and hungry people. For the past two years, I’ve been following the situation in Venezuela as each shocking event has unfolded. Americans who feel that our country would be better served by a socialist government would be wise to take note of this timeline of the collapse.

A quick review: Why Venezuela Is Out of Food

In 2013, many began to suspect that the outlook for Venezuela was grim when prepping became illegal.  The Attorney General of Venezuela, Luisa Ortega Díaz, called on prosecutors to target people who are “hoarding” basic staples with serious sanctions.
Shortly thereafter, grocery stores instituted a fingerprint registry to purchase food and supplies. Families had to register and were allotted a certain amount of supplies to prevent “hoarding.”
Then, just over a year ago, it became even more apparent that the country was falling when long lines for basic necessities such as laundry soap, diapers, and food became the norm rather than the exception. Thousands of people were standing in line for 5-6 hours in the hopes that they would be able to purchase a few much-needed items.
Shortly after the story broke to the rest of the world, the propaganda machine shifted into high gear.  As the government began to ration electricity, it was announced that this was not due to economic reasons at all, but instead was a measure of their great concern for the environment.
As the situation continued to devolve, farmers in Venezuela were forced to hand over their crops last summer. They assumed control of essential goods like food, and began putting retail outlets out of business. Then, once they had control of the sales outlets, they began forcing farmers and food manufacturers to sell anywhere from 30-100% of their products to the state at the price the state opted to pay, as opposed to stores and supermarkets.
But that wasn’t enough to keep the population fed. (Isn’t it astonishing how much less motivated people are to produce food and supplies when they are no longer allowed to benefit from their hard work? Historically, collectivism and farming have never gone successfully hand in hand.) This January, the government told citizens that they would need to produce their own food. The Ministry of Urban Farming was created to oversee this. While self-reliance sounds great, it isn’t so great in Venezuela. Just so the urban farmers don’t get too self-reliant, a registry of the crops and livestock will be required. (And obviously, they’ve already proven that they have no issue forcing farmers to hand over what they’ve produced.)
Now, it looks like all of the socialist measures and forced food production haven’t been enough to keep the people of Venezuela fed. The country is in so much trouble now that it isn’t possible to cover it up with propaganda.
According to Breitbart.com, lawmakers have learned nothing.

Socialist legislators are hoping to manipulate the initiative in the other direction, and use it to expand government control of private food enterprises. Legislator Héctor Rodríguez has insisted that the economic emergency “does absolutely nothing,” and the government should impose itself on private enterprises. Another socialist legislator, Ricardo Molina, is calling for the government to expropriate Polar, Venezuela’s largest private food corporation: “we have to intervene on private sector enterprises.”
Venezuela previously forced a Polar food distribution center in Caracas to shut down in July, putting 12,000 tons of food, six million liters of soft drinks, and 2,000 jobs at risk.

And now, the announcement of the “nutritional emergency” makes it official. Venezuela is out of food, and it’s only a matter of time before Venezuelans are quite literally starving due to a long series of terrible decisions by their leaders.

10 Strategies to Survive and Thrive During Economic Collapse - Subscribe To Get Your Free Copy
Email address:

Subscription is FREE and CONFIDENTIAL

Prep before it happens

It’s essential to note as this all plays out that there is little people can do now to rectify their situations. If they aren’t already quietly prepared, they are completely at the mercy of their socialist government.  It is absolutely vital to put back supplies well before the general public is aware that a crisis is pending.
As well, consider the fact that many folks here believe that a socialist government is exactly what our country needs. They eagerly lap up the promises of “free education” and “free healthcare.” They warmly embrace a presidential candidate who is an unabashed socialist. It absolutely astonishes me. They’d be well-advised to pay attention to how well the freebies have worked out in Venezuela. Socialism is not a sustainable economic model, something that has been proven time and time again, much to the detriment of the victims of the misguided notions.
The game pieces here are already lined up to control the American people should our economic situation continue to worsen. For example, there are already laws in place to “prevent hoarding.” Remember a few years ago when President Obama signed an executive order that gives the federal government authority over every resource and infrastructure element in the United States?
There are a lot of uncomfortable parallels that can be drawn between America’s financial situation and the disaster in Venezuela, and one thing is clear: self-sufficiency is the only way to protect your family. Even if you haven’t really begun to prepare, there’s still time to become more self-reliant. Here are some steps you should consider:

It is vital to practice OPSEC (Operational Security) by keeping your preparedness-related activities on the down low.  Preparedness and self-sufficiency author Tess Pennington warns that in a crisis situation, things you said months or years ago could come back to haunt you.

A person should think twice about telling others about any prepping investments they have made.  If a SHTF scenario occurred, anything said previously can be used against that prepper.  For example, if you tell your neighbor you have silver coins stashed away, if times were desperate enough, that neighbor could turn on you.  Keeping quiet about what one does is second nature to some.  But for others that are new to the idea of prepping, they do not see the whole SHTF picture.  If one person tells another about their preps, one person could tell another person about what preps their neighbor has.  Then, the word spreads throughout; especially when a severe situation occurs.  People will remember what you have told them, and come to you for help (if they are unprepared).  Helping a neighbor or family member in need is a noble deed.  However, those preparedness items are an investment for you and your family; and therefore, no one outside of the family should know what you have (unless you want that person to know). (source)

As people become more desperate, they behave far differently than they would in normal circumstances. You have to be prepared for the day when you might have to defend your home, family and supplies. When an economic disaster strikes, the one thing you can count on from the government is that they will not be prioritizing you and your family. In a situation like the one in Venezuela, you will be completely on your own at best. At worst, your supplies will be targeted “for the greater good.”   Maintain your freedom by becoming quietly self-sufficient.
Image Credit
Please feel free to share any information from this site in part or in full, leaving all links intact, giving credit to the author and including a link to this website and the following bio. Daisy Luther lives on a small organic homestead in Northern California.  She is the author of The Organic Canner,  The Pantry Primer: A Prepper’s Guide to Whole Food on a Half-Price Budget, and The Prepper’s Water Survival Guide: Harvest, Treat, and Store Your Most Vital Resource. On her website, The Organic Prepper, Daisy uses her background in alternative journalism to provide a unique perspective on health and preparedness, and offers a path of rational anarchy against a system that will leave us broke, unhealthy, and enslaved if we comply.  Daisy’s articles are widely republished throughout alternative media. You can follow her on Facebook, Pinterest,  and Twitter,.

Posts : 1827
Join date : 2012-02-15
Age : 66
Location : Ct
This is really interesting considering so much of our food comes in via ship and the shipping industry has tanked...SEE PREVIOUS BDI POSTS......Are they cutting off our food supply?

OUT OF MIND » THE INSANITY OF REALITY » GOVERNMENTS & THE NEW WORLD ORDER » Venezuela Is Out of Food: Here’s What an Economic Collapse Really Looks Like