OUT OF MIND » CHANGING ENVIRONMENT & NATURE » NEW TECH FOR A HEALTHY PLANET »  Ready for an Open Source World? Inventor Releases Open Source Plans that Will Usher in the Maker Culture

Ready for an Open Source World? Inventor Releases Open Source Plans that Will Usher in the Maker Culture

Ready for an Open Source World? Inventor Releases Open Source Plans that Will Usher in the Maker Culture Tue Feb 16, 2016 9:27 am 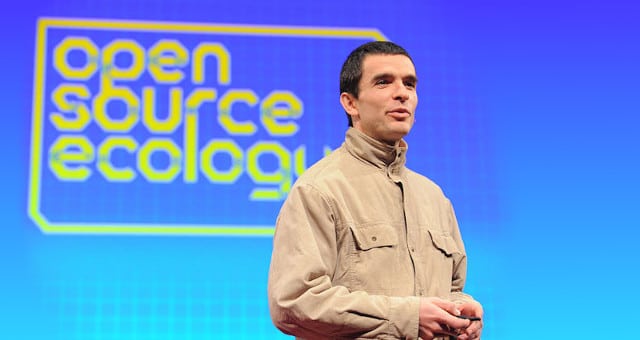 In a world desperate for a cultural shift that can offer us a future beyond the inevitable crash of consumer civilization, those who have a better vision and those who have the knowledge and skill to bring ideas into fruition are finding it easier than ever to connect and make amazing things happen.

We have before us the great potential for the emergence of the ‘maker culture,’ a culture where communities make what they need out of what they already have, using ideas and plans developed, tested and shared freely via open source.

Among the ranks of incredible people around the globe who are actively bringing about this kind of societal transformation is Marcin Jakubowski, a Polish born US immigrant who’s grand vision for the future of technology and local sovereignty is being built, right now, on a small Midwestern farm in the US.

After earning a Ph.D. in fusion physics, he settled down on some acreage in rural Missouri to learn the more practical skill of farming. Now he’s become the mastermind of Open Source Ecology (OSE), a NGO and hive of engineers, architects, inovators, farmers, and forward thinking pioneers who are condensing 250+ years of industrial knowledge into a single set of machines and tools that will allow individuals to accomplish industrial level infrastructure, machining, farming and energy projects on a small, local scale, using locally sourced and repurposed materials and biofuels. It’s called the Global Village Construction Set (GVCS). 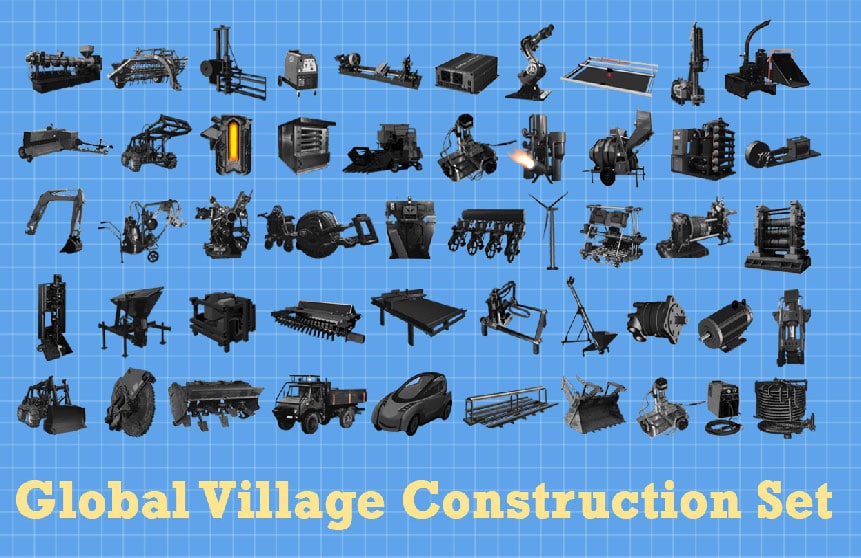 “In 2009, Jakubowski posted on the OSE blog a list of fifty machines that, in his view, could cheaply provide everything that a small community needed to sustain a comfortable existence. The list became the Global Village Construction Set. It includes mainstays of contemporary life (tractor, bakery oven, wind turbine) and also exotic, and relatively untested, equipment: an aluminum extractor, developed for lunar missions, that wrests the metal from clay; a bioplastic extruder, which converts plant-based plastic into such domestic necessities as window frames and adhesive tape. So far, Jakubowski has built sixteen of the machines—most of them prototypes—and he has also sold a few, at a small profit.” [New Yorker]

In 2011 his mind-blowing project was introduced to the world in a short TED talk in which Marcin tells the entertaining story of the genesis of the GVCS:

True to the spirit of the maker culture and the collaborative social revolution, the immense technical designs, plans, specs, schematics, manufacturing processes, materials and costs for the GVCS have been available to the public, free of charge, free for download, and open for public comment, here at the OSE wiki page and here at Open Source Ecology. 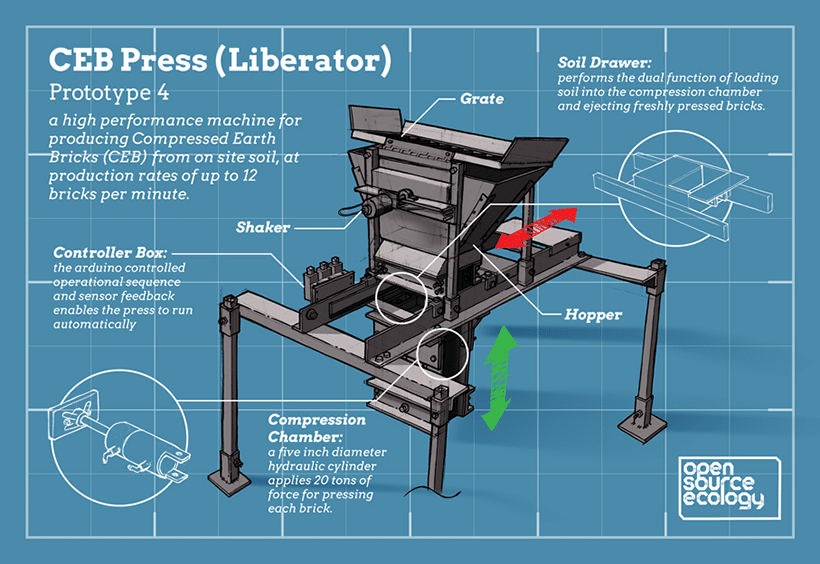 The brick press can produce over 5000 bricks in single day using nothing more than dirt and soil. 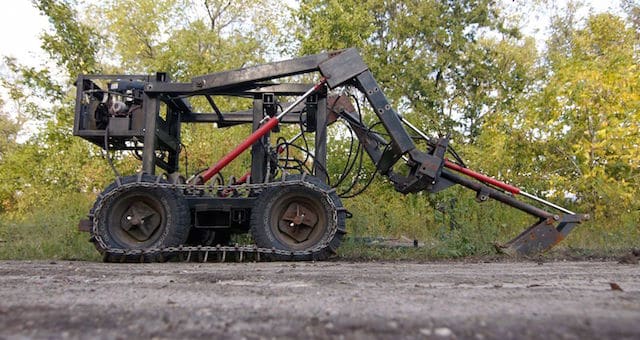 The attention garnered from the TED talk has helped the project connect with dozens of volunteers and like-minded people around the world who’ve been steadily pushing this project forward, contributing their effort and intelligence both virtually and in person. The organization is expanding its home, Factor e Farm, where they are using the GVCS to build a fully functional sustainable community prototype, including housing for volunteers and farming projects. 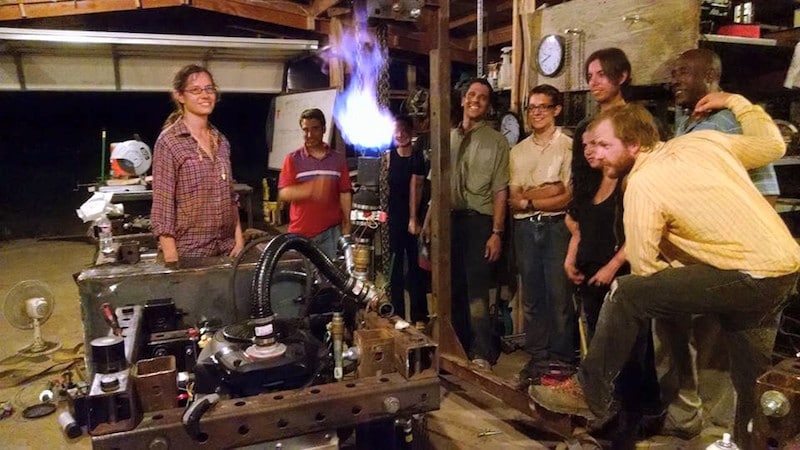 Successful first run try of the charcoal powered gasifier power cube, a generalized power source that can produce electricity as one of its applications.

As of 2015, a total of 18 of the machines have been built as prototypes, and replications of the machines are beginning to show up around the world. In Nicaragua, the GVCS brick press is being used to create dozens of low cost houses for people who otherwise could not afford to purchase the building materials. The brick press can produce over 5000 bricks in single day using nothing more than dirt. 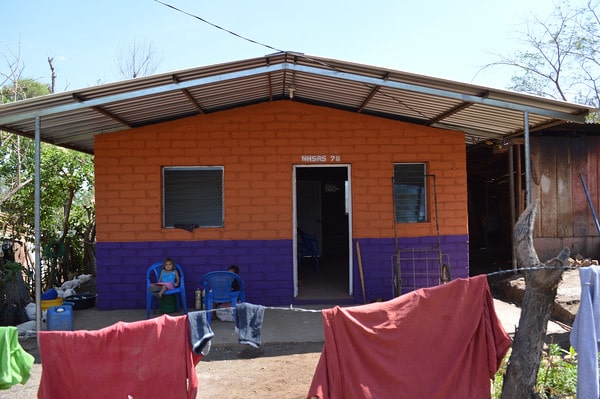 A house in Nicaragua constructed out of bricks made with the GVCS brick press. 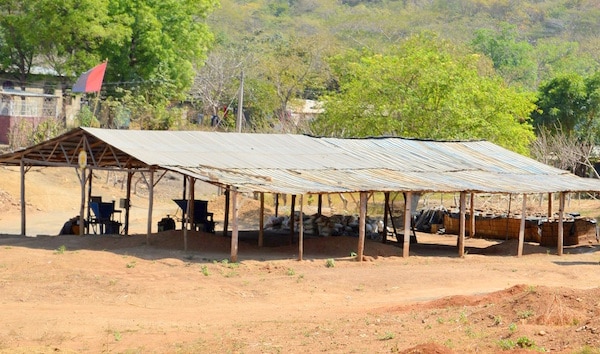 The ‘Liberator’ brick press on the left side of the bodega.

In addition to designing and prototyping the GVCS, Marcin and Open Source Ecology are also teaching people how to complete modern sustainable farming projects, like aquaponics systems, via online courses which can be taken from anywhere around the world.

Their current project which builds a greenhouse, an aquaponics system, mushroom cultivation and several other sustainable farming systems into one project, and builds the entire thing in just a 6 day period. More details here.


“Our goal is a repository of published designs so clear, so complete, that a single burned DVD is effectively a civilization starter kit.”
– Marcin Jakubowski


The Open Source Ecology Aquaponics Workshop is a 6 day immersion experience where we build Open Source Ecology’s largest weekend construction project – an 800 square foot aquaponic greenhouse. The overall workshop is broken into two 3-day sessions, where participants can choose either or both. In the first workshop, we will build the greenhouse structure with polycarbonate double-wall glazing, with ponds and hydronic heating, at a cost of $4000 – or 3x lower than industry standards. In the second workshop – we will build the integrated biological modules for an integrated greenhouse with ecological pest management. This is another workshop where OSE is pioneering its Extreme Manufacturing approach of rapid building with multiple teams working in parallel on modular components. We are aiming for the most integrated, yet practical and affordable, greenhouse in the world.

If you would like to see all of this in a hands-on, immersive way, join us at http://opensourceecology.org/aquaponic-greenhouse-workshop/.


The ambitious goal of Marcin and his collective of pioneers of sustainability is to effectively end artificial scarcity by demonstrating what a new ‘maker culture’ can look like when super-imposed on top of the tail end of consumerism.

The time for this level of global collaboration is now, and we have the knowledge and the technology to subvert the current system by creating something new right where the old one stands.

Open Source Ecology is onto something huge here, and what they need more than anything right now is to reach as many people around the world as possible in order to connect to those very few people out there who have the interest, knowledge, talent, and will to assist in pushing this project to completion. 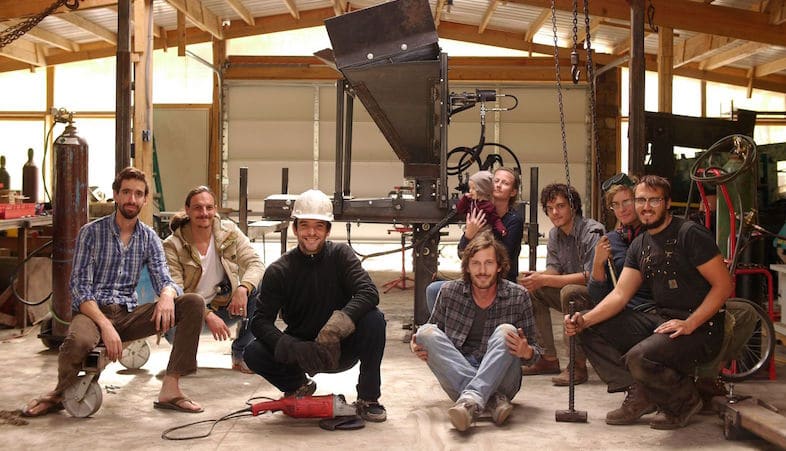 
Technology has opened new frontiers. No longer do continents and cultures inhibit collaboration, and when and idea’s time has come, the entire world at large can review, it, evaluate it, support it, contribute to it, and share it.

In the spirit of collaboration and networking, please share this inspiring story far and wide.

Here’s a recent interview taking at Factor e Farm where Marcin talks about current projects and workshops with a volunteer:

Dylan Charles is a student and teacher of Shaolin Kung Fu, Tai Chi and Qi Gong, a practitioner of Yoga and Taoist arts, and an activist and idealist passionately engaged in the struggle for a more sustainable and just world for future generations. He is the editor of WakingTimes.com, the proprietor of OffgridOutpost.com, a grateful father and a man who seeks to enlighten others with the power of inspiring information and action. He may be contacted at wakingtimes@gmail.com.

OUT OF MIND » CHANGING ENVIRONMENT & NATURE » NEW TECH FOR A HEALTHY PLANET »  Ready for an Open Source World? Inventor Releases Open Source Plans that Will Usher in the Maker Culture

» U.S. Plans for More Migrant Releases When Title 42 Asylum Limits End Wednesday
» 5G Space Appeal is ready for delivery; SpaceX plans 30,000 more satellites
» "BANK SCREENS WERE LOADED AT 4:40 AM EST. READY FOR EXCHANGE BETWEEN 2:00 TO 4:00 PM EST FROM FOREX SOURCE"
» CERN PLANS TO OPEN A PORTAL TO ANOTHER DIMENSION BY SEPT 2017!
» The open source revolution is coming and it will conquer the 1% - says ex CIA spy