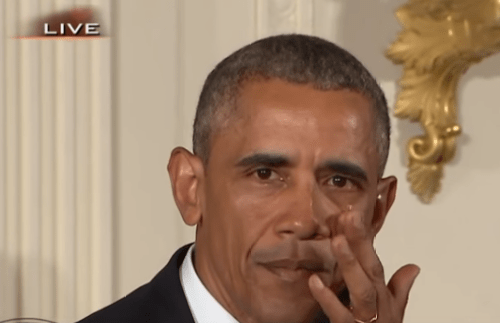 Obama has announced he is skipping Justice Scalia’s funeral.
He and Michelle will visit the justice while he lies in repose at the Great Hall on Friday, but he is not even going to attend the guy’s actual funeral. They’re sending Biden and his wife instead.
By contrast:

The most recent member of the Supreme Court to die was Chief Justice William Rehnquist in 2005. In that instance, President George W. Bush not only attended the funeral, he also eulogized Rehnquist, who had been nominated to the court by Richard Nixon.

Obama doesn’t even have to play along anymore, it being his last year and all, but still. Is there a more blatant form of disrespect within the bounds of polite society?
Guess Obama is too busy picking out Scalia’s replacement so he can effectively own a third of the Supreme Court for life. Oh, and he claims now in retrospect he feels bad that he filibustered George W. Bush’s nomination of Alito back in 2006 when Obama was a senator, but he also claims somehow that’s totally different than now when Obama is about to be the president who has gotten to nominate a third of the Supreme Court for life (via Politico):

“The president considered the qualifications and world view and credentials and record of the individual that President Bush put forward and then-Sen. Obama raised some objections,” Earnest said.

Uh huh. What about the “world view” of Kagan and Sotomayor and whomever Obama picks next? How is that going to affect the country?
It’s only been three days since and already Republicans are already backing off of their promise to challenge whoever Obama picks to replace Scalia by the way.
The idea that Supreme Court justices are nominated for life is insane.
Meanwhile, Scalia was embalmed within 24 hours of his death, rendering any potential autopsy results useless which is okay, because they weren’t ever going to perform one anyway.
Piper writes for The Daily Sheeple. There’s a lot of B.S. out there. Someone has to write about it.

An Open Letter To The U.S. Congress Regarding Justice Antonin Scalia

Dear Members of Congress,
The death of Supreme Court Justice Antonin Scalia has shaken the country to its core.
Many are still waking up to the grim realities which surround both the circumstances and scene of his death.
The immediate reaction by many Americans across the entire political spectrum is that something is very wrong with this whole situation.
Regardless of political sensibilities, Justice Scalia was recognized by most as a bulwark that protected the U.S. Constitution like no other.  He was both a stalwart sentinel and stentorian who defended the spirit and the letter of the Founding Documents of these United States of America.
He was the only sitting SCOTUS jurist who always sided with the Constitution. That’s not to say he did not make some judicial errors from time to time.  However, SCOTUS insiders knew full well that those calculated errors were deliberately made to protect the nation and American society.
You see, Justice Scalia was extremely aware of the threats that President Obama and his Administration posed to the country.  He witnessed, like all of us, the irreparable tearing of the social fabric which has occurred on Obama’s watch.  As a staunch conservative and traditional man of Italian-American ancestry, he profoundly understood the necessity of the rule of law.
Where are we going with this?
There is no question that the Obama Administration represents the most lawless presidency in U.S. history.  On every front, it has sown seeds of social chaos and political pandemonium.  Justice Scalia saw this clearly.  And he used the high bench to militate against the destruction of the American Republic.
He was not shy about expressing his misgivings with Obama et al. and the way the Administration flouted federal law and trampled on state statutes.  He was deeply pained by the encroaching anarchy caused by so many unlawful Executive Orders.  He knew that the very existence of the United State was in great jeopardy.  And he felt compelled to prevent the nation’s imminent destruction.
Clearly, Justice Antonin Scalia was the single biggest threat to Obama and his legacy.  He was the very quintessence of opposition to everything Obama championed.  He was also well known to be public enemy #1 the more he took his SCOTUS platform to the people, as he often did.  He knew deep down inside that the American people must be educated … must be enlightened … about the ongoing devastation of their country which was once defined by a rule of laws, not of tyrants.
Herein lies the crux of this humble plea from the people.  Justice Scalia’s untimely and mysterious death MUST be investigated by a completely independent, apolitical organization that is trusted by the American people.
Members of Congress, this humble plea WILL be honored to the fullest extent possible.  Should this request be ignored or mishandled, it will quickly morph into a movement.  This movement is already growing by the day, mind you.
Let us be clear from the outset regarding the absolute necessity of determining the true cause of the death of Justice Scalia.  If he was in fact murdered, as many Americans now suspect, this situation will not be allowed to go the way of JFK.
Not only that, but if the Congress fails to fully investigate this exceedingly suspicious death and official response from the U.S. Federal Government, then there will be HELL to pay.
No, we’re not gonna take anymore.  In the words of Howard Beale of NETWORK fame: We’re mad as hell and we’re not going to take this anymore.
Hopefully you just got the message, because if you didn’t the following may just happen.

“When 5 million Oathkeepers and armed militia surround the Capitol Building one day and force out the entire Congress, the place will change in a New York minute. When the American people install a provisional government, the White House will finally be taken back from those who misappropriated it.”
(Source: The United States of America Was Born
in the Year of the Fire Monkey)

Lastly, may we say that Antonin Scalia was an eminently noble human being.  He was a kind soul who lived his life with great passion and joie de vivre.  He was deeply loved by his family and many friends.  He was also a true friend of the American people.  Therefore, if he was killed, whoever was responsible will be found and prosecuted to the fullest extent of the law.  That’s both a promise and a threat.  As Justice Scalia would say: Capiche?!
Very sincerely,
Concerned Citizens of the USA


P.S. There is a plethora of articles and commentary on the Internet (see those linked below) which have expressed shock at the manner in which the suspicious death of a Supreme Court Justice was handled by EVERYONE concerned. For your edification, here are just a few of those posts which capture the profound irresponsibility and stunning neglect of the various government’s actions and inactions
Support For Local Sheriffs Empower Organic and Public Law Owed To All
The Very Mysterious Death of Justice Antonin Scalia
Trump: Scalia Murdered? ‘Unusual Place to Find a Pillow’
The Level of Disrespect for the Deceased Justice Antonin is Unprecedented
MICHAEL SAVAGE: ‘WAS SCALIA MURDERED?’
Was Justice Scalia murdered? Forget “conspiracy theory.” This is real.
Donald Trump considers theory Scalia might have been murdered
Antonin Scalia’s Death Could Mark End of Constitution
Justice Scalia’s ‘Natural Death’—Cui Bono? And Why They Did It?
Who Murdered The Most Famous Italian-American Since Frank Sinatra?
SOURCE with thanks http://stateofthenation2012.com/?p=31517 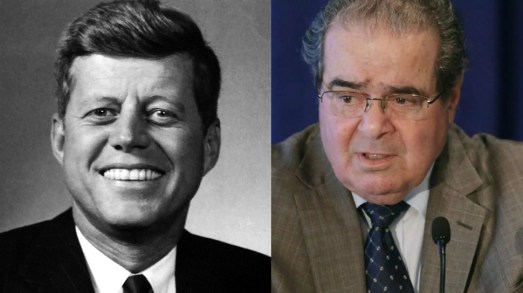 [The corporate media have perhaps purposely failed to scrutinize the many anomalies surrounding the death of senior Supreme Court Justice Antonin Scalia, calling commentators who’ve questioned the especially unusual circumstances surrounding his death “conspiracy theorists.” Yet there is no disputing the fact that several international and domestic political economic agendas will be hastened by Scalia’s removal from the highest court in the land.-JFT]

Scalia: Texas Sheriff Received Millions in Federal Grants [video]
It’s sounding like the sheriff in Presidio County may have been in the Feds’ pocket.

Victims are coming forward to exspose Scalia as a long time sexual abuser and that he was not alone in the room when he was killed but was in the room with a 13 year old boy who is alleged to have retaliated and killed Scalia by slicing his throat hence the lack of autopsy. That the location was used as a brothel to traffic young children to high paying customers "Why did Scalia leave his detail of protection, fly to Texas, and go to a place that was an hour from the rest of civilization? No police, no media- and the only people who stay at the 600 dollar a night dump are rich people. I have seen pictures of the rooms, and they don’t look any better than your local Super 8 motel rooms- so why are the rich flocking to this place? And why this rush to not have an autopsy and declare that he died of natural causes? Most everyone has seen a problem with this- but they don’t understand what is happening. Scalia liked to fuck little boys. I know this from personal experience- as he was one of my primary abusers as a child and was one of the HEADS of the cult that abused me. He was a vile man who was such an extreme sadist that I find it hard to give words to his voracious appetites. I hated this man in ways that I can’t begin to explain and he rivaled Aquino in my abuse as a child. That is why Heaven reached out and claimed him- and I can assure you- he isn’t going to be the only one." davidshurter.com/?p=6029