OUT OF MIND » VOICES CARRY » AMAZING PEOPLE, PLACES & THINGS » Elderly Man Called 911 Because He Was Hungry, So These Cops Did Something Unexpected…

Elderly Man Called 911 Because He Was Hungry, So These Cops Did Something Unexpected…

A 79-year-old man called dispatchers because he hadn’t eaten in two days and needed help. So, these officers used their own money to stock his pantry for month’s. They then launched a food pantry at the police station to help citizens in a similar situation.

Last Saturday, a disabled 79-year-old man called dispatchers saying he hadn’t eaten in two days and was hungry. The 911 call was a last resort for the elderly man, but it was answered by a group of police officers of Mt. Pleasant in Tennessee.
WKRN News reports that a group of the station’s officers showed up at the hungry man’s door with several bags full of groceries.

Reportedly, they spent $160 of their own money to make sure the man had enough food in his kitchen to last him a month.
Said Nathan Bolton, one of the officers:

“I think he was shocked at the amount of food that we bought and just the fact that it was there without question.”

When one of the pictures of the officers stocking the man’s cabinets was posted on Facebook, the country was made aware of the men’s good deed.

“It’s difficult for us to see as police officers. We’re out here to take care of the public at large and that doesn’t always mean stopping a car. Sometimes it’s us doing little things like this,” said Mark Billions, one of the officers.

Most of the news concerning police nowadays has to do with brutal arrests and unnecessary fatalities. Therefore, it’s heartening when the positive deeds carried out by the law enforcement workers are shared, as well. At the end of the day, we are all human and need to act compassionately; these officers did just that.


The elderly man, who prefers to remain anonymous, said he appreciates everything they did to help him. The man is on a fixed income and relies on his social security benefits each month to get by. 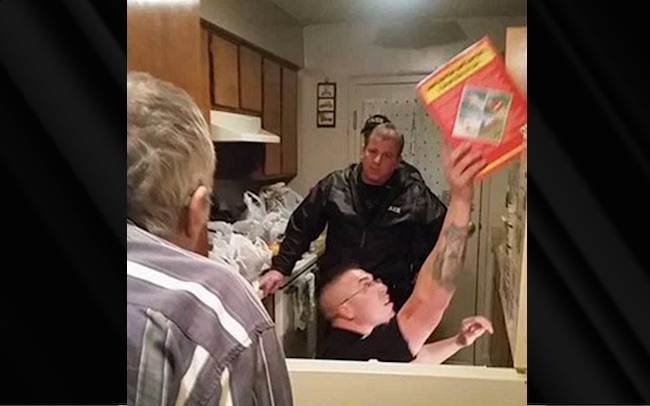 Unfortunately, a former caretaker stole his debit card last weekend, therefore, he did not have any funds to buy food. Thankfully, the thief was found and faces charges for fraudulent use of a debit card.
Since the incident, the police officers have started a food pantry to help other citizens that might be in a similar situation. If you are in the area and would like to assist, they are accepting canned food donations at the Mt. Pleasant Police Department.
What are your thoughts? Please comment below and share this positive news!

This article (Elderly Man Called 911 Because He Was Hungry, So These Cops Did Something Unexpected…) is free and open source. You have permission to republish this article under a Creative Commons license with attribution to the author and TrueActivist.com
Do you like to read about personal development, spirituality, health or activism? There is a new social network called Aweditoria that is purely based around interests. You can follow topics there and see the best small stories, ideas and concepts in those fields. Click here to try it out, it’s free and only takes few seconds to join. You can also follow Truththeory.com on Aweditoria!
source:
True Activist
Thanks to: http://truththeory.com

OUT OF MIND » VOICES CARRY » AMAZING PEOPLE, PLACES & THINGS » Elderly Man Called 911 Because He Was Hungry, So These Cops Did Something Unexpected…