Vatic Note:   This below is a result of the social engineering of our society, and especially our youth, that has been done to reduce our population world wide down sufficient for the evil ones to control or do away with resistance.   Its also their way of diminishing the intellectual pursuits of our young people.  To make them, basically,  dumbed down, or like Zombies, if you will.  Lots of movies out proving it.

I am publishing so much on health because that is the soft kill that is being used in this war against  us.  Vaccines, (drug companies),  Cell phones (Telecommunications companies),  chemtrail dumping (Dupont chemicals), and other weapons of war used to either sterilize us, harm us, or kill us off.

Finally they intend to restructure our DNA to remove our resistance to their control over our globe.   Add to this the smart meters which will be used not only to depopulate, or sterilize, but also to create the global spy grid the G20 decided to set up to spy on us through those smart meters.  It was reported more than once as an item on their agenda. 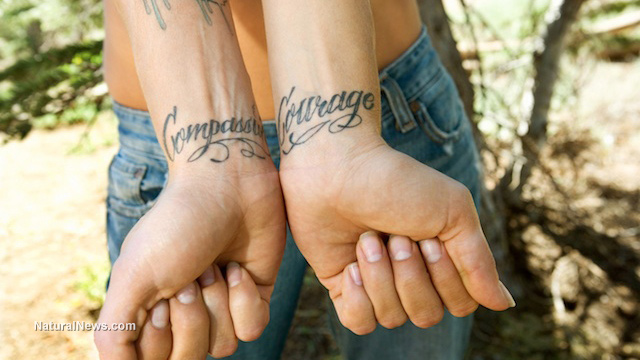 (NaturalNews) It's somewhat amusing when health-conscious folks try to defend tattoos, all the while ignoring the fact that everything from the needle itself to the ink being injected is a potential health hazard. A recent study found that most tattooed people who develop some kind of acute reaction following the invasive procedure also end up developing chronic health problems like constant swelling and infection.

After polling some 300 tattooed people walking through New York's Central Park, researchers found that only about 10% recalled suffering any noticeable reactions following the procedure. But among those who did, six in 10 said they suffered severe health problems that didn't go away for a long time; some of them still suffering to this day.

Dr. Marie Leger, a dermatologist at the New York University Langone Medical Center in New York City and co-author of the recently published paper, says she decided to investigate the issue after noticing an uptick in the number of patients coming to her because of problems with their tattoos. After speaking to friends and colleagues, she discovered that tattoo-related health problems are much more common than she previously thought.

Her paper, which was published in the journal Contact Dermatitis, contends that one in 10 people who get tattoos experience itching, swelling, redness or infection as a result of the procedure. In most cases, these adverse effects last for months or even years, though many tattooed people decide to just live with it and avoid seeing a doctor.

Claiming that she actually likes tattoos, Dr. Leger still warns that people need to be aware of the risks involved, which are probably more severe than the average person assumes. Injecting any kind of unnatural substance below the skin obviously isn't risk-free, and since getting a tattoo is largely permanent (aside from getting it professionally removed), people need to carefully consider what they're doing to their bodies.

"Of 300 participants, 31 (10.3%) reported experiencing an adverse tattoo reaction, 13 (4.3%) reported acute reactions, and 18 (6.0%) suffered from a chronic reaction involving a specific colour lasting for >4 months," warns the study. "This study shows that tattoo reactions are relatively common, and that further investigation into the underlying causes is merited."

What about the ink itself? According to Dr. Leger, tattoo ink is very loosely regulated in the U.S., meaning it may contain all sorts of hidden toxins that, once injected, can never be fully removed. Tattoos are a lot like vaccines, in fact, as recipients are typically unaware of what's being pumped into their bodies.

Natural News can confirm, based on tests conducted in our own in-house Forensic Food Lab, that some tattoo ink contains upwards of 6,000 parts per billion (ppb) of mercury.

Other research has shown that tattoo ink often contains heavy metals like titanium, copper, chromium and iron. One study out of Italy published in 2009 identified cadmium, cobalt, chromium and nickel in all of 13 separate ink samples from a single supplier. Most of these samples also contained mercury, according to the study.

"Very few countries have any regulations controlling the composition of tattoo inks," explains the website Science Or Not.

"Most have regulations covering colourings used in foods and cosmetics. These do not apply to tattoos, but some tattoo ink suppliers make reference to such regulations to imply that their products are safe. The wide variety of pigments used and lack of regulation means there is potential for harmful consequences."

To see the test results of many other consumer products, including brown rice protein and cacao powder, be sure to visit the Natural News Forensic Food Lab website:
Labs.NaturalNews.com.