MINNEAPOLIS — Outrage erupted earlier this year as we learned that local, state and federal officials knew about Flint, Michigan’s lead-contaminated water supply for nearly a year, but they did nothing to address the deadly problem.
But few took note when people converged in Washington to protest radioactive pollution affecting the water of Native American communities. Even though the level of contamination is far higher and persisted longer than the crisis in Flint, there was barely a peep from the mainstream media.
Since the 1950s, waste from active and inactive uranium mines has seeped into the Navajo Nation’s water supplies, which has led to increased rates of cancer, genetic defects, Navajo neurohepatopathy, and increases in mortality.
The material that fed the Cold War by making atomic bombs possible is also found in low concentrations of ore, making its runoff a toxic sludge containing other harmful elements, like arsenic and lead.
It’s not just uranium mining that’s made the Navajo Nation’s water so dangerous, though. Dirty coal-fired power plants have also been major polluters of both water and air throughout the 27,000 square miles that the Navajo Nation occupies in the Southwest.
The latest assault on their water came just last year, when “acid mine drainage” entered the Animas and San Juan Rivers following the EPA’s reckless attempts to address long-standing issues with the abandoned Gold King Mine in Colorado. The spill was so severe that parts of the Animas River turned a bright gold within a day, and the affected area, which passes through three states, has been declared a disaster zone. 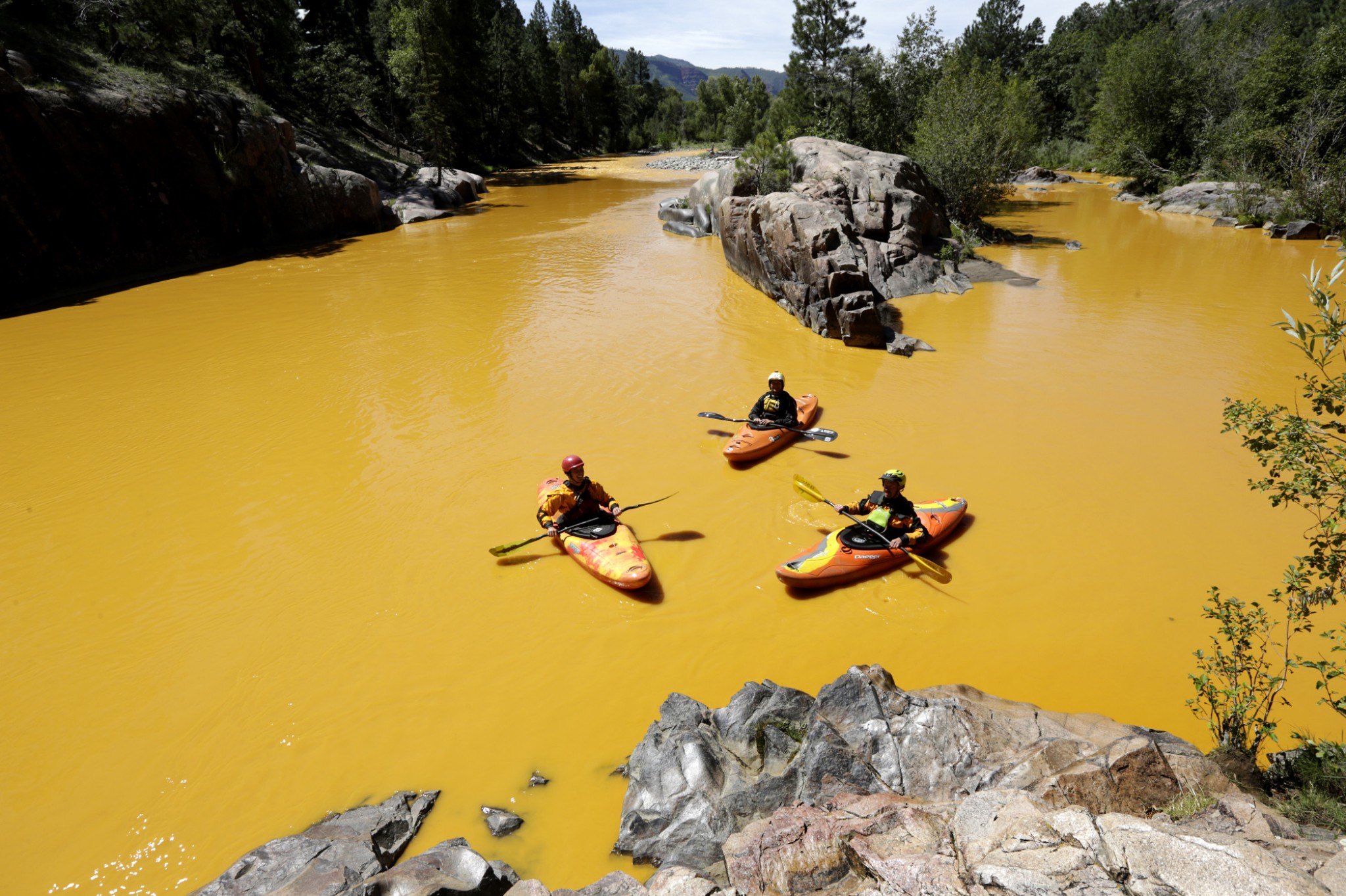 People kayak in the Animas River near Durango, Colo., in water colored from an EPA mine waste spill. ( Jerry McBride/The Durango Herald via AP)
The Navajo Nation certainly isn’t alone in their fight against repeated violations of the sanctity of their land, not only at the hands of the nuclear and coal industry, but by the government itself.
In December 2014, We reported on a last-minute provision tucked into the National Defense Authorization Act which would allow for the creation of the continent’s largest copper mine in protected national forest in Arizona, part of which includes lands considered sacred by multiple Native American communities.
The land at hand involves Oak Flat and Apache Leap, sacred, ancestral lands in parts of the Tonto National Forest from which Apache communities had been forcibly removed. In 1955, federal law closed the land to mining out of respect for the Apaches’ spiritual ties to the land and concerns about water safety.
The plan for the proposed copper mine had been rejected by Congress and opposed by tribes for years.
Yet, once it was hidden away in the fine-print of the mammoth annual document that funds the Pentagon, the 2,400 acres of previously protected Apache land could be handed over to Resolution Copper Mining and these tribes could soon face a water poisoning disaster that worse than Flint and comparable to the Navajo Nation.
It’s important to consider who snuck the policy rider into the NDAA: Two of the plan’s greatest champions are Arizona’s Republican senators, John McCain and Rick Flake. Both of them have received campaign contributions from Rio Tinto, the British-Australian mining giant which owns Resolution Copper. Flake even worked as a lobbyist for Rio Tinto.
And, indeed, the law does mandate environmental impact studies and tribal consultations.
But, the law is worded in a way that Resolution would receive the land for mining regardless of the outcomes of those environmental assessments and consultations.
What’s worse, though, is that the law doesn’t include any penalties for the company for any future environmental or cultural harms in the area, leaving the Apaches themselves — not the mining giant, not lawmakers — to deal with the aftermath.
Once the scope of the provision became apparent, Apaches decided to “occupy” Oak Flat.
They stayed for months last summer, refusing to leave. Their tenacity ignited a growing movement against the land swap, with over 104,00 signatures on a “Stop Apache Land Grab” petition to the White House and at least a million people calling on Congress to repeal the deal.
Only time will tell what the impact of this pushback will be. People have enormous power, but, unfortunately, so do corporations and the lawmakers who support them instead of working for the public they’re elected to represent. If the mine begins operating, it seems almost inevitable that the effects will play out as dangerously as they have for the Navajo Nation.
Just like the people of Flint, Apaches and Navajos will scramble to secure emergency supplies of fresh drinking water. But, unlike in Flint, their plight will go largely unnoticed by the mainstream media. Madonna and Michael Moore won’t be sending bottled water by the busload to Apache school children. Racism against Native Americans will persist as America’s silent genocide of Native communities continues.
Watch the full episode of Behind The Headline: