Is it possible that this ancient coin, dating back from the 1680’s, is depicting  an alien UFO visiting planet Earth?

According to numerous UFO researchers, the jeton, which has an inscription of a saucer-shaped object is, in fact, the ultimate evidence that Alien beings have visited Earth in the distant past.
Many people have also suggested that what we are seeing in this ancient Jeton is in fact a representation of the Biblical story of Ezekiel’s wheel, in the story man envisions four ‘beings’ all accompanied by mysterious flying wheels. UFO Hunters firmly believe that the story of Ezekiel’s wheel is the Bible’s own story of an ancient UFO encounter.
While the Jeton itself isn’t a new discovery, the story behind it was revived by UFO Hunting website UFO Sightings Daily.

Over the past few years, skeptics have come up with their own theories disproving the one proposed by UFO hunters saying that the object depicted on the 17th-century coin could be a drifting mushroom or flower, or even a shield.
Interestingly, similar depictions of ‘saucer-shaped’ objects can be found on several other coins and numerous ancient paintings.
UFO researchers Scott C. Waring, who is the editor of UFO Sightings Daily believes that the 17th-century jeton is the ultimate proof showing that UFO sightings were frequent in ancient France and were an important phenomenon, which is why they were inscribed on coins. 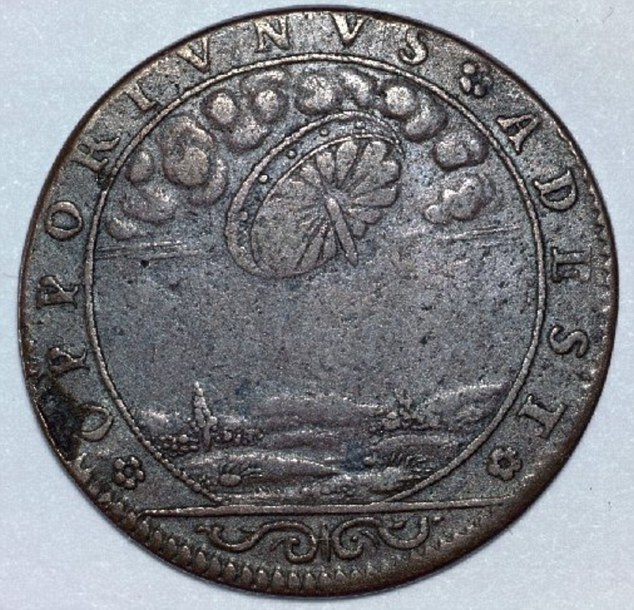 ‘I’ve been looking for one of these off and on for a few weeks. It looks really amazing and is absolute proof that in the 1600s the French witnessed enough UFO sightings to decide to put some of what they saw on coins,’ writes Waring.
‘This is a French jeton minted somewhere between 1856 to 1680, a coin-like educational tool that was commonly
used to help people count money, or sometimes used as a money substitute for playing games.
‘It is about the size of a U.S. quarter-dollar and similar to thousands of other jetons with different religious and educational designs that were produced and used in Europe during the 16th and 17th centuries.
‘It appears to commemorate a UFO sighting of a wheel like an object. Some researchers feel it represents the Biblical Ezekiel’s wheel.
‘The Latin inscription ‘OPPORTUNUS ADEST’ translates as ‘It is here at an opportune time.’
The truth behind the depiction of the mysterious ‘saucer shaped’ object remains an enigma as researchers can only ‘guess’ what the enigmatic object shown on the coin actually is. However, we cannot help but make reference to other similar artifacts found across the planet.
A very interesting ancient painting called The Baptism of Christ” by Aert De Gelder depicts a similar object levitating in the sky while shooting down to Earth mysterious ‘rays of light’. It is one of the most interesting paintings and according to the Ancient Alien theory, this painting is a piece of strong evidence which illustrates a Disk Shaped flying object. 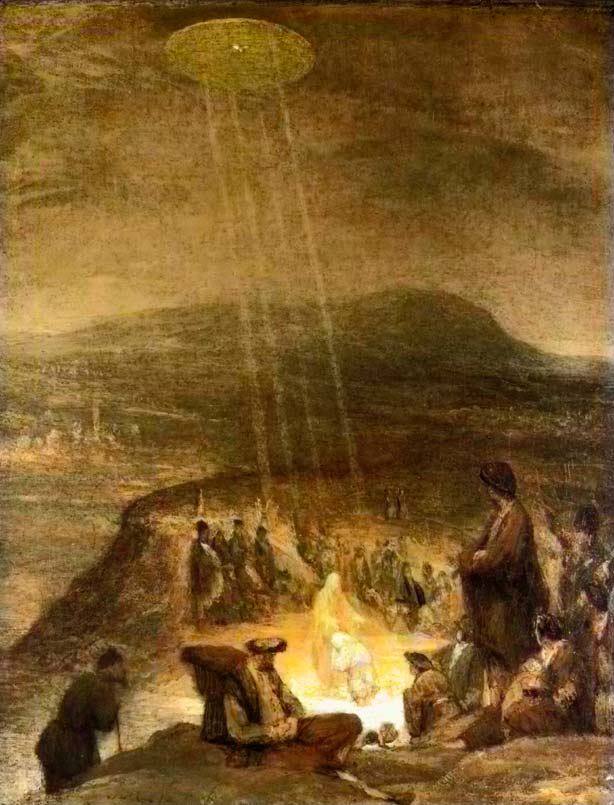