OUT OF MIND » VOICES CARRY » AMAZING PEOPLE, PLACES & THINGS » Scientists Claim to Have Finally Found the Identity of Banksy

Scientists Claim to Have Finally Found the Identity of Banksy 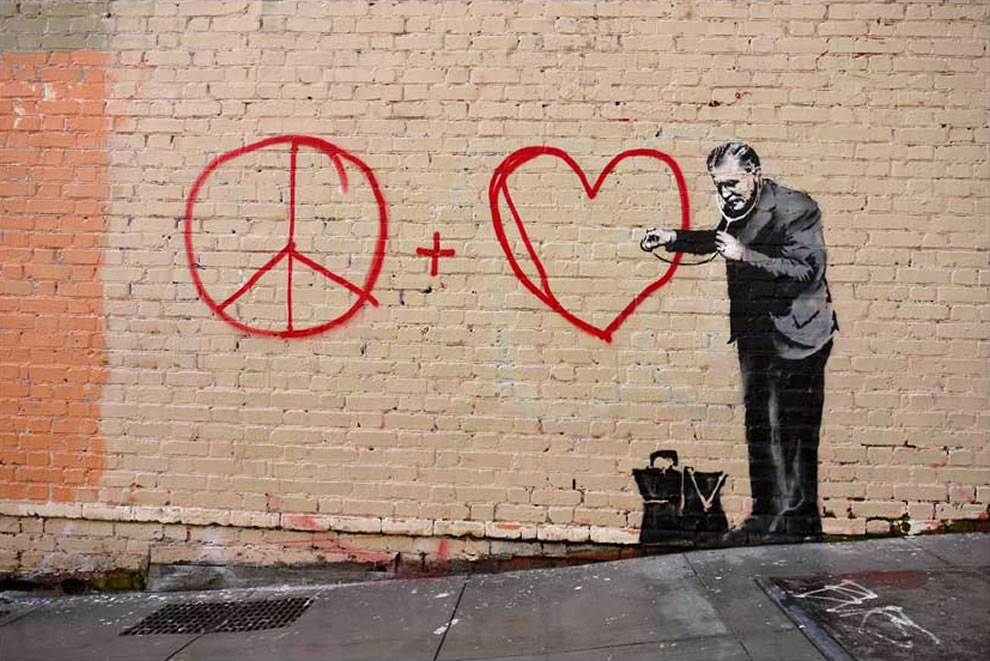 By Michaela Whitton, Anti Media
(ANTIMEDIA) United Kingdom — As the U.K.’s most prolific street artist, Banksy’s real identity has always remained a mystery. Let’s face it, most of us preferred it that way, but the closely guarded secret was outed last week by a group of British academics using a combination of maths, criminology, and geographic profiling.
Some of the artist’s work has sold for £500,000, though some critics say it should be classed as vandalism. The study, which was subject to a delay due to concern by Banksy’s lawyers about the wording of a press release, has used techniques more typically used by criminologists in narrowing down the location of repeat offenders.
Describing graffiti as a minor terrorism-related act, the U.K. researchers used crime profiling techniques to oust the notorious street artist. They claimed:
“These results support previous suggestions that analysis of minor terrorism-related acts (e.g., graffiti) could be used to help locate terrorist bases before more serious incidents occur, and provides a fascinating example of the application of the model to a complex, real-world problem.”
Scientists conducted the study to demonstrate the wide applicability of geoprofiling, which analyzes the locations of a connected series of crimes to determine the most probable areas of offender residence. The system suggests that everyone has an “activity space” related to the areas in which they live, work, and play; and that this space produces a discernible pattern of movement around the city. By taking a large set of locations to find “hot spots,” the technique can be used to concentrate a subsequent search, or whittle down a list of suspects.
Appearing online on Thursday, the research revealed the methods used to analyse a number of locations of Banksy’s artwork across Bristol and London. These were then mapped against “anchor points,” such as the homes of people suspected of being Banksy in order to draw conclusions about his identity.
For Banksy geeks and followers of his trademark graffiti, whether on the urban political landscape of London or bombed out buildings in the besieged enclave of Gaza, the scientific unveiling comes as little surprise. The new information merely backs up a 2008 Daily Mail report which revealed the guerrilla artist as Robin Gunningham, a former Bristol public schoolboy.

Robin Gunningham, the man scientists claim is the real Banksy.
Biologist Steve Le Comber said that scientists conducted the study out of interest and to see whether the geoprofiling would work. “What I thought I would do is pull out the 10 most likely suspects, evaluate all of them and not name any … But it rapidly became apparent that there is only one serious suspect, and everyone knows who it is,” he told the BBC.
Meanwhile, YouTuber Snoop the Dog has spent a couple of months visiting all of Banksy’s pieces that are still up in London, which you can see below.


This article (Scientists Claim to Have Finally Found the Identity of Banksy) is free and open source. You have permission to republish this article under a Creative Commons license with attribution to Michaela Whitton and theAntiMedia.org. Anti-Media Radio airs weeknights at 11pm Eastern/8pm Pacific. Image credit: El Payo. If you spot a typo, email edits@theantimedia.org.

OUT OF MIND » VOICES CARRY » AMAZING PEOPLE, PLACES & THINGS » Scientists Claim to Have Finally Found the Identity of Banksy