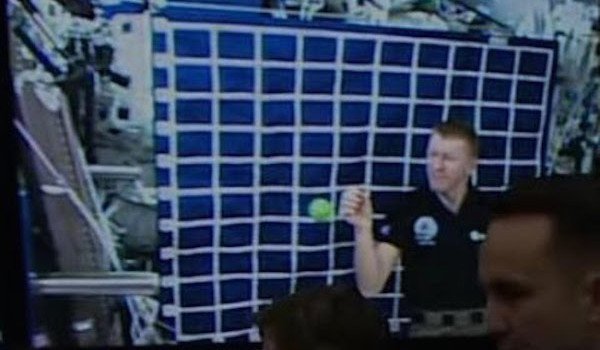 NASA Caught Using ‘Blue Screen’ To Fake Astronaut Footage
March 8, 2016 · Uncategorized · 0 Comments
A video has been leaked featuring George Bush Sr. visiting NASA which inadvertently shows British Astronaut Tim Peak standing in front of a blue screen with a grid pattern on it. The screen appears to be between him and a film set showing the ISS.
This appears to be the first “behind the scenes” look at how the green screen is used when filming the “experiments” on the ISS, such as the water CGI shots, and other CGI overlay shots. A grid, or key points on a green screen is one way to do motion-overlay/image overlay in after effects.
In order to have a correct reference on the 3d environment in the background, either grids, or key spots are used, and the software then uses that as a reference in which to overlay CGI images on a 3d mesh. Without the reference points, only a single vantage can be used to film (such as what we see when weather people do the nightly news).
Because this is such damaging information, I have a feeling NASA’s only recourse at this point is to release the original footage, with Tim Peake in front of the grid, and the ball, and say it was some sort of “experiment” and the grid and blue screen are there as a way to “Track the ball’s course” or something like that. Even that would make you beg the question why this particular footage hasn’t been released to the public yet. What are they waiting for?
In my opinion, this shot was intended to be edited later for some sort of “space demonstration” but now can only be used in it’s original form at some point in time, and will then be used as an attempted straw-man against the use of Green Screen being used.
Either way, it is very strange that the footage shown on the background hasn’t been shown to the public.. and it appears to be exactly what it looks like- an AstroNOT in front of a green screen, the very same technique many have speculated is being used, and is constantly used in Hollywood to create convincing videos of “space”. The Big Bang Theory created more convincing CGI of space than the stuff NASA has been showing us recently.” – conspiracyclub