OUT OF MIND » CHANGING ENVIRONMENT & NATURE » NATURE & ENVIRONMENT » Seed Bombs: A Creative (and Fun) Mission to Save the Bees and Butterflies

Seed Bombs: A Creative (and Fun) Mission to Save the Bees and Butterflies 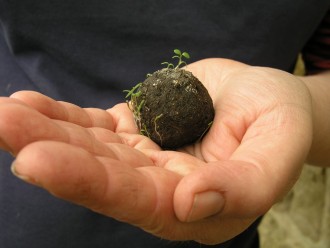 10th March 2016
By Carolanne Wright
Contributing Writer for Wake Up World
By now most are aware of the dire situation of the honeybee: dwindling numbers, collapsed colonies and dying hives — which endangers not only honey production, but also the food supply. We face a stark reality if bee numbers continue to decline, some foods will become downright impossible to grow — such as almonds, certain berries and apples. Not to mention bees contribute approximately $15 billion to U.S. crop production. If they all but disappear, the economy will be hard hit.
And it’s not just honeybees at risk. Wild pollinators — thousands of breeds of bees, butterflies, moths and birds — are in trouble as well. Some speculate GMOs are the cause of the shrinking numbers, others claim pesticides — especially those of the neonicotinoid and glyphosate class — are at the root of the problem. Many believe it’s a combination of both. While environmental advocacy groups and corporate chemical companies battle it out, grassroots efforts have taken the matter in hand and have cultivated an innovative solution to the issue. One such organization is the Great Seed Bomb.

Jill Jordan was tired of hearing about the frightening state of pollinators — and decided to do something about it. An environmental advocate and social entrepreneur with a master’s in public administration, Jordan is no stranger to how we can create effective change. Having worked for the Environmental Defense Fund in Austin, Texas and the Climate Institute in Washington, D.C., she’s seen first hand how assaulting nature wreaks havoc on wildlife. Years back, she learned of the plight facing pollinators and it always remained in the back of her mine. Then one day, she had enough.
Using the immensely popular charity 5K and 10K model, she decided to take the idea a step further and developed a scenic bike ride that included planting wildflowers — which ultimately birthed the Great Seed Bomb. Ticket proceeds from the event help support local environmental non-profits, while participants “bomb” the landscape as they ride with dirt and compost balls that contain a mighty treasure within: a blend of non-GMO milkweed and bee-friendly native wildflowers.
“This is an ancient agricultural method,” Jordan told Dallas Innovates. “If you just chuck seeds out there, they’ll get eaten or washed away. This method gives the seed ample time to survive.”
Milkweed is especially important as it has been disappearing at an alarming rate because of landscape fragmentation and herbicide use. As noted by the organization: “A whopping 90% of the monarch butterfly population is gone. This is mainly due to the use of glyphosate (Roundup) – a pesticide destroying much of the monarch habitat, which consists of milkweed and wildflowers. Most unsettling is the fact that when there is no milkweed, there will be no monarch – it’s where they lay their eggs and monarch larvae feed almost exclusively on milkweed.” 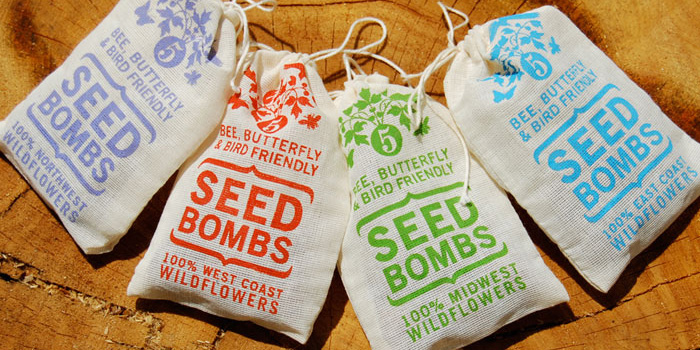 However, the event isn’t just about planting seeds. The ride will also raise awareness for the importance of:

The first Great Seed Bomb took place on November 15, 2015 in Fort Worth Texas. Participants were given a fanny pack filled with the seed balls and encouraged to toss them anywhere along the 15-mile bike route. Vendors and environmental learning stations lined the trail, where people could stop and enjoy refreshment in a festive atmosphere, all the while learning more about our delicate ecosystem. Due to national news coverage, Jordan has received many requests from people and organizations wanting to plan their own seed bomb event. Minnesota, Wisconsin, New Mexico, Kansas, Iowa, as well as cities around Texas, have expressed interest. The next event Jordan is planning will start in the bike-friendly neighborhood of Oak Cliff in Dallas on April 23 and end at the Earth Day Texas 2016 gathering at Fair Park.
If you’re in the area, the launch is happening now. Get involved: spread the word, volunteer, donate, become a sponsor and buy your ticket to ride. Or if you would like to learn more about how to start a Great Seed Bomb event in your own community, you can connect with the organization here.

“The Great Seed Bomb is about environmental awareness,” Jordan says. “We’re empowering nonprofits that don’t have a lot of money, and we’re giving people something tangible to do. And we’re helping to grow flowers and plants for thousands of monarchs and bees.” [source]

OUT OF MIND » CHANGING ENVIRONMENT & NATURE » NATURE & ENVIRONMENT » Seed Bombs: A Creative (and Fun) Mission to Save the Bees and Butterflies