Today at 1:57 pm by PurpleSkyz

Today at 1:18 pm by Consciousness Of Economic

» How do the Musical Pillars Work? Rock Melting Technology? Cymatics?

Yesterday at 10:15 pm by RamblerNash

The Positive and Negative Sides of Japan's Obsession with Dating by Blood Type on Fri Mar 11, 2016 11:29 am 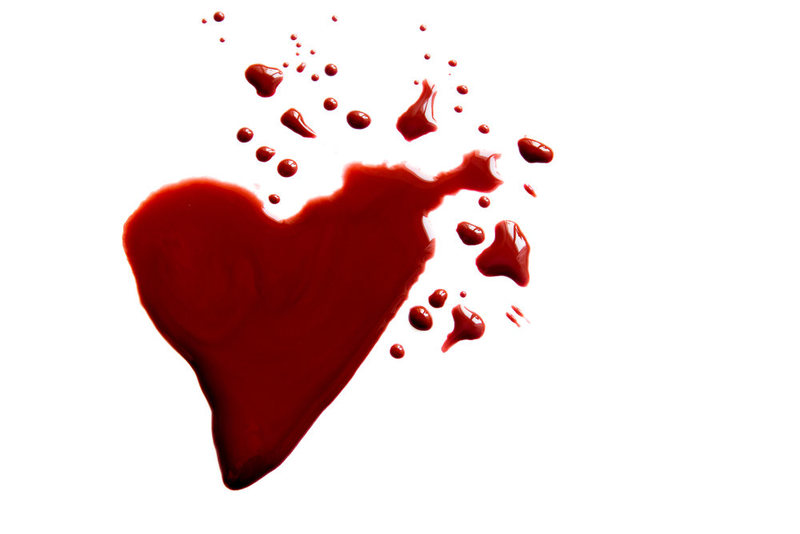 Searching for love through blood type. (Photo: Oksana Mizina/shutterstock.com )
Finding love—lasting love—is notoriously difficult, and it’s easy to feel as if the ways in which to find it are all but exhausted. Some people try to match themselves with potential mates by their horoscopes, finding how their personalities were influenced by the stars. Others look to numerology, and the mystical connections between numbers and life events. Others take a more biological approach: dating by blood type.
Using blood types beyond medical intent–such as a marker for personality traits–has become an increasingly popular pastime in recent years, though the idea has been knocking around Japan since the late 1920s. Depending on your cultural background, thinking of blood types in this way might not be so obvious, but there’s a large audience in East Asia that believes in its merits, most notably in Japan and Korea, and the United States is beginning to catch on, too.
Like numerology and astrology, the idea of using blood types to distinguish personality types has no grounding in science. In medicine, blood types are labeled A, B, O, or AB (positive or negative), and indicate whether one person can tolerate the blood transfusion of another. Blood type personality theory takes these categories to a new, obsessively detailed level. As with horoscopes, some people give blood types serious regard when making decisions about their careers and love lives. 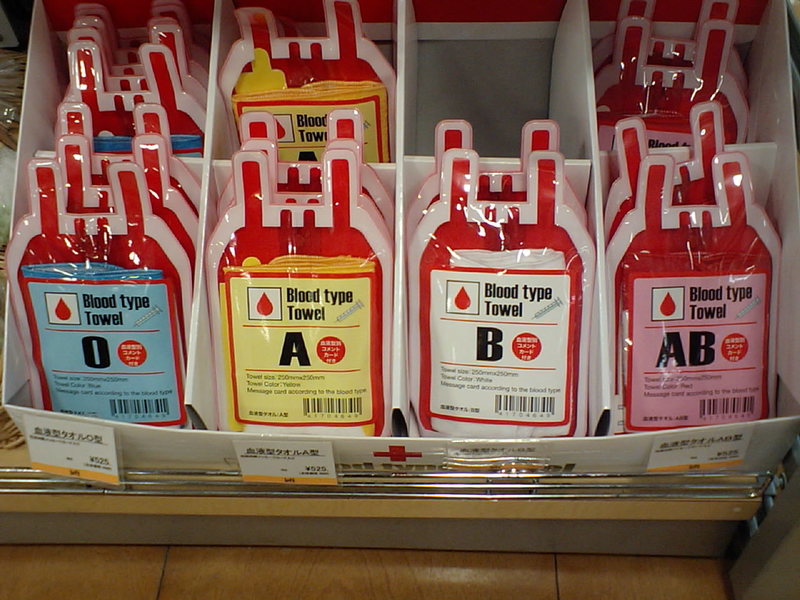 Towels for specific blood types on sale at a Japanese department store. (Photo: Chris Gladis/ CC BY-ND 2.0 )
The theory’s popularity in Japan has its origins in a 1927 paper, "The Study of Temperament Through Blood Type", by psychologist Furukawa Takeji, who noticed differences in personality among groups of students while working in the administrative department of a women’s high school. He subsequently proposed a relationship between personality and the A, B, O and AB blood types, though scientists were skeptical in Japan at the time, and remain so today, with most seeing no basis for a correlation between blood type and personality.


Terumitsu Maekawa, professor at Tokyo's Asia University and author of several books on blood types, told the BBC in 2012 that the phenomenon opened the door to what’s known as bura-hara, or blood type discrimination in Japan: the minority blood type groups, AB and B, can be looked over for certain job opportunities and projects in the workplace, or are assumed to have negative qualities. These blood types, which are common in the Taiwanese and Ainu minorities in Japan, were used to label them “violent and cruel” or “backward,” respectively. 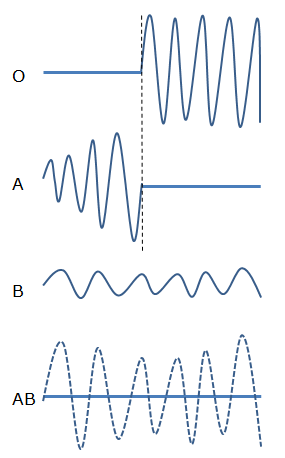 A chart based on Masahiko Nomi's hypothesis, of how different blood types react to pressure. (Photo: Umibe/CC BY-SA 4.0 )
The idea stuck around, however, and in the 1970s, journalist Masahiko Nomi brought the notion to personality quizzes. He published a book called Blood Type Humanics about blood types and personality, which became hugely popular. Soon, the relation between blood type and human traits was as much a part of Japanese new-age culture as astrology books are elsewhere in the world.
Today, books that promote blood type personality theory still sell briskly. The Japanese books A, B, O, and AB, published in 2009, cover a full range of what to expect of your blood types’ quirks ranging from choosing a career to romance, and were both best sellers .
Blood type is mentioned everywhere from Facebook profiles to actors’ Japanese Wikipedia pages. Speed dating in Japan can even focus on blood type—potentially weeding out personality traits that don’t match well in a long-term relationship. The Korean rom-com My Boyfriend is Type B dives into the trouble a bad blood type match can bring; the girlfriend of the movie couple, who has type A blood, has to cope with the selfish side of her type B boyfriend, which leads to an emotional roller coaster. 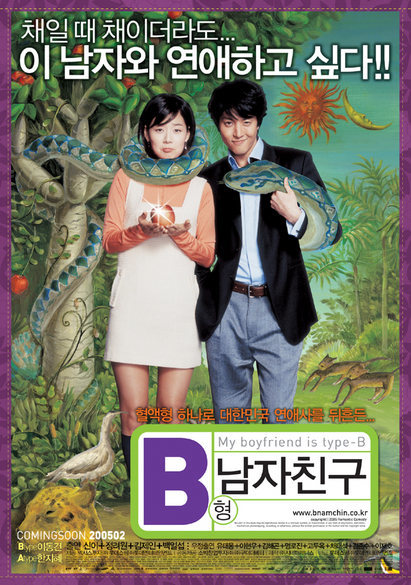 The poster for the Korean film My Boyfriend is Type-B. (Photo: Courtesy Lotte Cinema)
Here are the most widely believed blood-based stereotypes: people with type A blood, “The Farmers,” are earnest and sensitive, but also stubborn and intense. Type AB “Humanists” are rational and cool, but have a ‘split personality’ that is hard to handle. Type O “Warriors” are optimistic but insensitive, and the type B “Nomads” are the bad boys of the blood type personality world: wild and passionate, but irresponsible and selfish.
All this categorization has also led to a slew of blood-type specific products and lifestyles. Some blood type personality followers believe that certain work activities react better with your blood type; some even suggest different types of chewing gum . Romantic compatibility can lead to other forms of intimacy, and that’s been considered, too–you can even buy specialized blood type condoms . 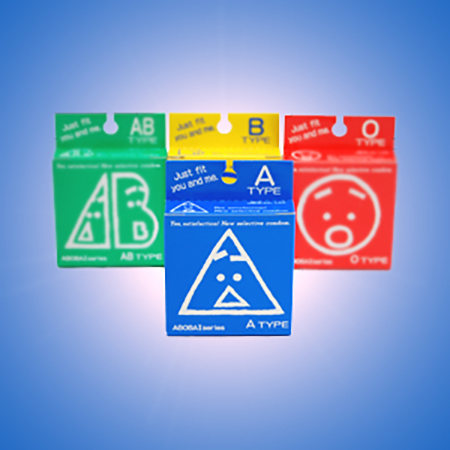 Condoms for specific blood types. (Photo: Courtesy Body Touch )
As blood type personality theory moves along to other cultures, it gains new cultural twists. Though discredited by scientists, in recent years western versions of blood type diets and exercise regimes have taken hold, advising people with type O blood to eat more protein, or for type A’s to avoid aerobic exercise. There’s even an OkCupid Blood Type Personality Test (which warns that your results might vary). One horoscope site combines zodiac-based horoscopes with blood types, in case your zodiac sign isn’t as accurate as you’d hoped. According to WaybackMachine , the first English-language website for blood type dating became active in 2011, and now boasts thousands of members.
Whatever you think of blood type personality theory and its ability to help you find love, blood can hold a place in relationships in a more traditional, medical way. In November of 2015, Alana Duran and Lori Interlicchio met on Tinder and found they were the same blood type, which resulted in Interliccho giving her girlfriend a much-needed kidney, taking blood type romance to a new and more practical level than ever before.
If you’re curious about how to find your perfect blood type personality match, quick at-home blood type test kits are sold on Amazon, and you can use an online blood type calculator to quickly scan a match. But don't forget that A is most compatible with A and AB; B is most compatible with B and AB; AB is most compatible with AB, B, A and O; and O is most compatible with O and AB. And if your head isn’t spinning from that, you’re probably ready to head out into the ever more dizzying and complicated dating world.