CHICAGO -- The Donald Trump campaign on Friday night canceled a rally slated to take place in an arena at the University of Illinois at Chicago after protesters overwhelmed the event. The campaign cited safety concerns, given the tense confrontations between Trump protesters and supporters.
After the cancellation was announced, fights started to break out at the UIC Pavilion, CBS News' Sopan Deb reports. 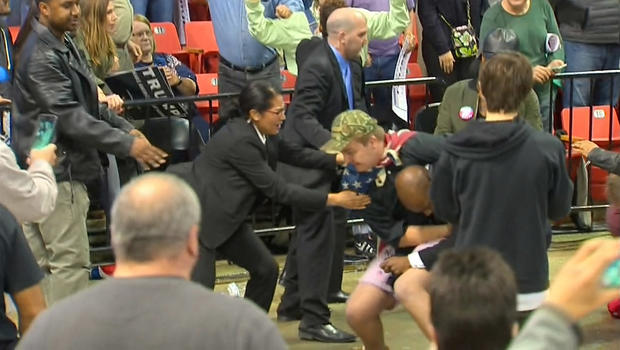 Fights broke out at the UIC Pavilion between Donald Trump supporters and protesters after Trump's slated rally was canceled due to safety concerns, March 11, 2016.

Ahead of Trump's arrival, hundreds of demonstrators lined up outside the arena to protest the Republican presidential front-runner. Large groups of Trump opponents also occupied multiple sections inside the arena. The mix of Trump supporters and opponents created a tense atmosphere, and finally a spokesperson for the campaign announced the event was canceled.

"Mr. Trump just arrived in Chicago, and after meeting law enforcement, has determined that for the safety of all the tens of thousands of people that have gathered in and around the arena tonight's rally will be postponed until another date," the man said from a podium. "Thank you very much for your attendance, and please go in peace."

However, a Chicago police spokesperson told CBS News there were no meetings between police and the Trump campaign about security.
CPD spokesman Anthony Guglielmi told the Associated Press that police never told the Trump campaign there was a security threat at the venue. He said the department had sufficient manpower on the scene to handle any situation.
Guglielmi said the university's police department also did not recommend that Trump call off the event. The decision was made "independently" by the campaign, according to Guglielmi. 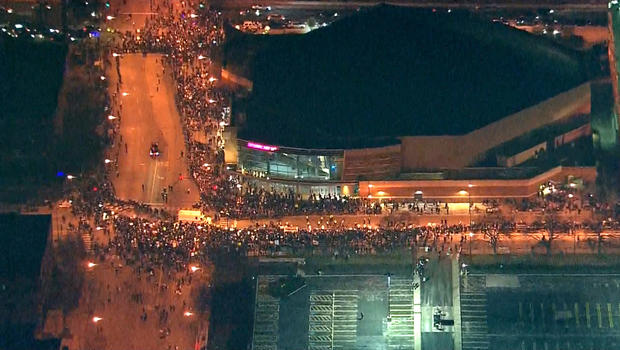 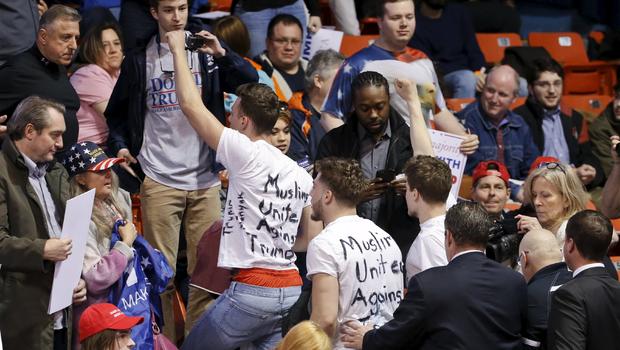 Protesters are escorted out of UIC Pavilion before Republican U.S. presidential candidate Donald Trump's rally at the University of Illinois at Chicago March 11, 2016.

CBS Chicago station WBBM reported a Chicago police officer was seen bleeding from the head, but it wasn't immediately clear what had happened. He was reportedly taken to Stoger Hospital in good condition.
Other police officers could be seen clashing with demonstrators.

The tumultuous event follows other incidents of violence at Trump campaign events. Earlier Friday, Trump visited the St. Louis area -- ground zero for the Black Live Matter movement -- and confronted streets filled with fierce protests that resulted in 32 arrests by local police.
On Thursday, a North Carolina man was charged with assault after he was caught on camera punching a protester at a Trump event -- a protester already in police custody.
Earlier Friday, Michelle Fields, a reporter for the conservative media outlet Breitbart News, filed a police report after alleging she was manhandled by Trump's own campaign manager, Corey Lewandoski. Lewandoski and the Trump campaign deny the allegation.

Trump has been criticized for the hostile remarks he's made about protesters. For instance, at a February 23 rally, referencing a protester, he sad, "I'd like to punch him in the face." The front-runner was questioned about those remarks at the Republican debate in Miami on Thursday night.
"We have some protesters who are bad dudes, they have done bad things," he said. "And if they've got to be taken out, to be honest, I mean, we have to run something. And it's not me. It's usually the municipal government, the police because I don't have guards all over these stadiums."

Then at a press conference Friday morning, the GOP front-runner once again put the blame on the protesters. "We've had a [protesters] couple that were really violent," he said. "And you know what? The audience swung back, and I thought it was very, very appropriate."
Friday's chaos prompted Kansas City, Missouri Mayor Sly James to offer some advice ahead of the Trump event scheduled to take place in his city on Saturday:

Later Friday, rival GOP candidate Ted Cruz said Trump has created "an environment that encourages this sort of nasty discourse."
Cruz spoke to reporters at a suburban Chicago Republican dinner, calling it a "sad day."
"Political discourse should occur in this country without the threat of violence, without anger and rage and hatred directed at each other," Cruz said.
Cruz said blame for the unrest Friday rests with the protesters but "in any campaign responsibility starts at the top."
He added, "When the candidate urges supporters to engage in physical violence, to punch people in the face, the predictable consequence of that is that is escalates. Today is unlikely to be the last such incidence."
Trump was scheduled to take part in the event but did not attend.
Editor's Note: In the midst of reporting on this event, CBS News' Sopan Deb was detained by law enforcement. We are awaiting more information on the circumstances and will continue to update our report.
© 2016 CBS Interactive Inc. All Rights Reserved.

[…] We got to the arena at about 3: 30pm and started filing in soon after. Security searched all handbags and backpacks.
We noticed entire sections of protesters occupying large section of the arena and also seated among Trump supporters. They were mean. Aggressive. Belligerent. Rude. Loud. They were very organized and started disrupting inside the arena before the announcement was made.
When announcement was made the whole place erupted in loud screams and shouts coming from all the protesters. They were celebrating the cancellation.
They didn’t stop there. They even wanted to take over the stage area with the microphone and paraded around locking arms among each other screaming at us, at all Trump supporters, hateful things. Obscenities. Vulgar gestures. They were awful. Demonic like. Many muslims, men and women. Bernie supporters all over the place. BLM as well. The whole place was swarming with them, like roaches.
The arena was slowly emptied out and all the Trump supporters were out on the side walks/streets and cops everywhere trying to keep the two camps separated. The protesters were so loud. Very loud.
They spilled over the streets and prevented traffic from moving from out of the parking lots and shouted and cussed at Trump supporters.
ADVERTISEMENT
These were America haters. Anarchists. Haters like I’ve never seen before. The lowest of the lowest human elements.
I can’t wait to vote on Tuesday. WE NEED TRUMP. . 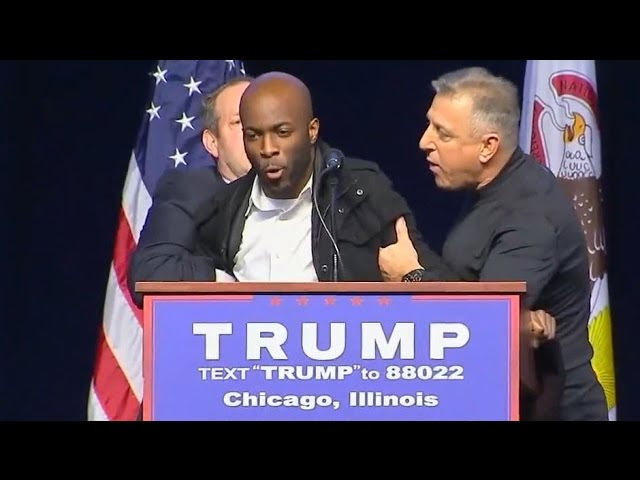