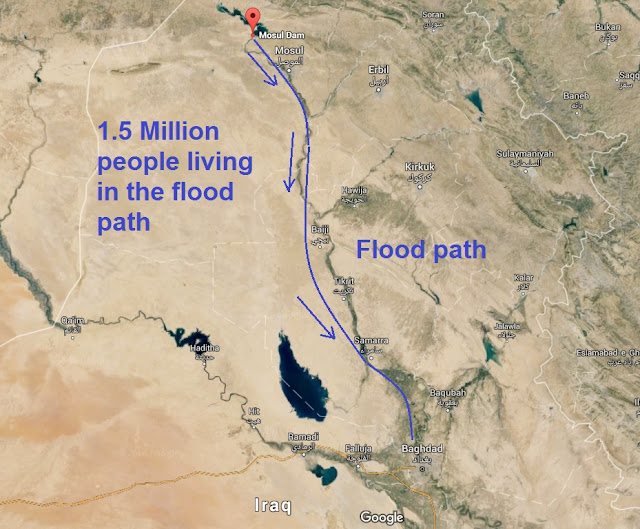 U.S. warns Mosul dam collapse would be catastrophic, the old structure is in a bad state of repair after almost 40 years of neglect, with many experts warning of an impending a disaster.
Mosul dam has sustained structural flaws since its construction in the 1980s.
If it collapsed, a wall of water would flood the heavily populated Tigris River valley.
With an estimated 1.5 million people living in the flood path America warns of hundreds of thousands of Iraqi deaths is imminent and the Iraqi government is helpless to evacuate those in Islamic State-controlled areas.
“In the event of a breach, there is the potential in some places for a flood wave up to 14 meters (15 yards) high that could sweep up everything in its path, including people, cars, unexploded ordnance, waste and other hazardous material, further endangering massive population centres.
In a recent report by The Telegraph they claim the dam is upstream from Mosul, which is Iraq's second largest city and has been under Isil control since June 2014 but the dam was soon recaptured by Peshmerga and other foreign forces.
Parts of the city could be under 45 feet of water within hours of a dam breach, the US said, giving residents little time to flee.
The wave of water would sweep as far south as Samarra; killing people, crushing buildings, laying waste to farm land and knocking out power plants.
The flood water would probably reach Baghdad within three days and bring chaos to the Iraqi capital with "increased health hazards, limited to no mobility, and losses of homes, buildings, and services".

"Much of the territory projected to be damaged by a dam breach is contested or Isil-controlled, suggesting an authority-directed evacuation is unlikely, and that some evacuees may not have freedom of movement sufficient to escape," the US said.
"The lack of an authority-directed evacuation effort probably will result in some vulnerable groups - like the sick, disabled, and elderly - being left behind."