Latest topics
» Sacred Geometry: DNA is the Flower of Life

OUT OF MIND » DISCLOSURE » NIBIRU, PLANET X & 9 & SUN SIMULATOR » NIBIRU News ~ US and Russia preparing for Nibiru arrival and aftermath plus MORE

NIBIRU News ~ US and Russia preparing for Nibiru arrival and aftermath plus MORE on Tue Mar 15, 2016 1:08 am

By Guest Writer David Meade
(bio and articles / forum )
Russia is just finishing 5,000 shelters in Moscow. They’re much more open (in this regard anyway) on this topic than other governments.
I personally estimate the US probably has over 150 Deep Underground Military Bases. A huge military underground city exists underneath the Denver Airport. Russia has some that can accommodate over 100,000 people (at the base of mountains). These are entire underground cities that have been under construction since the 1980s.

The far greater electromagnetic fields of Planet X will cause great earthquakes (greater than the highest level of 9.5 known to date), volcanic eruptions, tsunamis and a shift of the physical poles.
Now it is public knowledge that government agencies are on a need-to-know classification (intra-agency), and that they never publish information in advance that could cause an economic or other disruption. Enough said.
However, if you do any research at all you will run into different levels of disinformation. Some of this is from uneducated members of the public and some of it is very likely on purpose. You have to use your head when you do research.
Until the discovery of Planet X, astronomers had regarded the writings of the ancient Sumerians about this object as legend. When Planet X was discovered in 1983 , they suddenly learned that the Sumerians were not the primitive people they have been made out to be by “intellectuals” of today.
Pioneer
When Pioneer 10 was sent out to study Planet X, it encountered a mysterious force – dubbed the Pioneer anomaly by baffled NASA scientists. It was gently pushed against (by the force of the magnetosphere of Planet X) and moved in the opposite direction back toward the sun. Its forward momentum was decelerated.
Pioneer was traveling toward the right of Nibiru at this point. This tells us two things: (1) that Nibiru’s outer magnetic force is so strong it can affect objects 46.8 AU from Nibiru (Pioneer’s approximate distance at the time; (2) that Nibiru’s magnetism rotates in a clockwise fashion because that is the only way it could push Pioneer back when the deep space probe was flying to the right of it. If it rotated anticlockwise and the Pioneer 10 was traveling in the same direction, it would push the probe slightly forward and to the right of its trajectory. The effect would have been the opposite as the probe would have been seen to accelerate, not decelerate, in its drift.
HUBBLE
The real reason for the Hubble Space Telescope was NOT to explore the solar system and the Universe, as some claim from time to time. The real reason for spending billions of dollars to construct the telescope, place it in orbit and then immediately replace parts on it was for the purpose of viewing inbound Planet X. A June 6, 2011 interview with a Hubble Insider now published at YouTube on the video below states this fact as to the Hubble’s purpose. He watched it through the Hubble Telescope and stated that “this thing looked like it was across the street and the Hubble got cut off and they encrypted it and that was the end of any transmissions we had to watch.”
NIBIRU
Nibiru (aka Planet X and referred to by the Vatican as Wormwood) has a mass that is 3-5 times the mass of Jupiter. Its composition is cesium, iron oxide, iron, oxygen and ozone, according to the same video by the Hubble Insider, who also stated it has seven planets (moons) orbiting it and innumerable asteroids. Its existence is known by all of the major governments of the world. They are prepared – are you?
The object is huge and until recently it is a red dwarf star visible only in the infrared spectrum. The alleged agent claims that the government is monitoring the system and that in 2008 it could be seen in high detail with infrared telescopes.
I say observed through the infrared spectrum until recently, so take a look at the video below from North Carolina. Its approach is so close it can be seen clearly from the 11:00 position of the sun! About one minute into the video, just tilt your screen upward for a better view. This independent video is just one more indication using deductive logic that its close approach is occurring now.
Thanks to: http://planetxnews.com 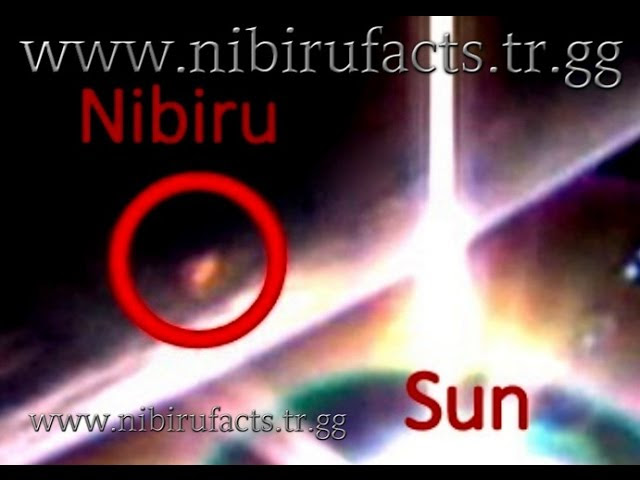 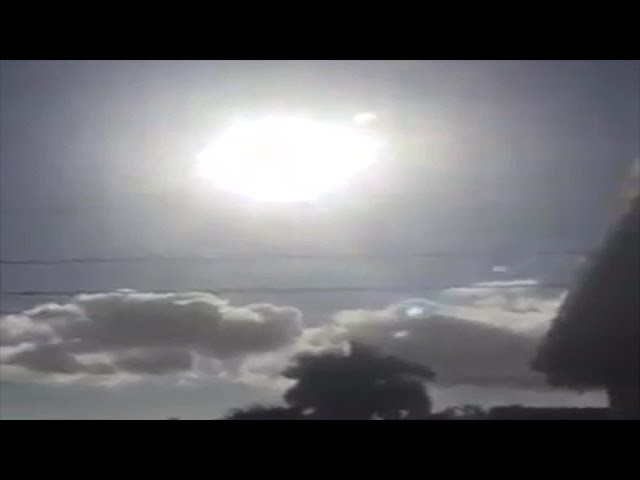 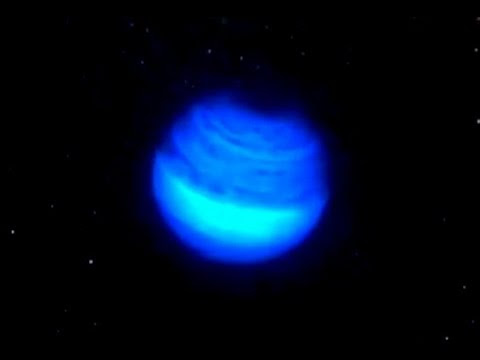 Growing evidence supports the theory that there is, in fact, a giant object located within the outer confines of our solar system, and these 6 enigmatic objects reveal Planet X DOES exist.

The extreme eccentricity of distant Kuiper Belt Objects (KBO) could indicate that they have crossed paths with a massive planet in the distant past, the supposed missing planet beyond Pluto: Planet NINE, aka Planet X.
This is the conclusion from a team of scientists belonging to the  Lunar and Planetary Laboratory at the University of Arizona who researched the growing evidence that our solar system does in fact, have a ninth, hitherto unknown planet in the outer confines of the solar system.

It is believed for some time now, that there are Kuiper belt objects which have strange characteristics attributed to them, their orbit is different and seems to give away a missing planet.
For some time now, it is known among researchers that there are certain Kuiper Belt objects which are well known because of their different dynamics.
While the majority of these objects is controlled significantly by the gravitational attraction of Gas Giants in our solar system –specifically Neptune–, there are other members of the Kuiper belt that have highly unusual orbits that seem to give away the presence of another, much larger object located in the outermost parts of the solar system. 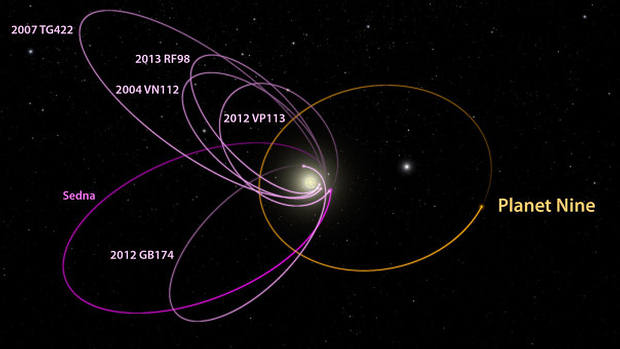 Earlier this year, astronomers at the California Institute of technology  announced new evidence directly supporting the existence of a giant planet lurking the edge of our solar system, far beyond of the Pluto. They have called it “Planet Nine.” The enigmatic Planet (X) orbits our sun at such a distance that it needs between 10,000 – 20,000 years to complete a single orbit around it.
The authors, of the study Michael Brown  and Konstantin Batygin, suggest that the smaller bodies located on the edges of the solar system appear to be influenced by the gravity of a hidden planet – a “massive perturber.” 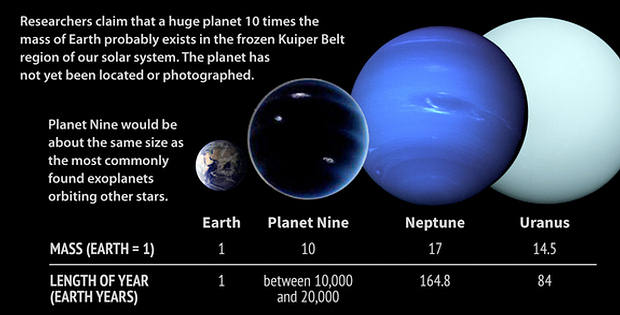 Brown and Batygin indicated that the objects in the Kuiper Belt seemed very grouped with respect to their perihelion and orbital planes. Even more interestingly, they calculated that the odds of this being a mere coincidence were extremely low:(0.007%).
Brown and Batygin theorize that there is an eccentric distant planet responsible for all of the anomalous patterns seen in the Kuiper belt objects. The planet in question is supposedly ten times more massive than Earth, and an orbit that was more or less in the same plane (but oriented at 180 ° with respect to the Kuiper belt objects perihelion).
A new study called: Corralling a distant planet with extreme resonant Kuiper belt objects, published by including Professor Renu Malhotra, Dr. Kathryn Volk, and Xianyu Wang from the University of Arizona, a totally new perspective is offered by the possible existence of the enigmatic celestial object called Planet Nine or Planet X.
If in fact, “Planet X” crosses paths with certain objects in the Kuiper belt with high eccentricity, then this planet should definitely be in resonance with them.
After examining the orbital periods of six objects in the Kuiper belt -Sedna, 2010 GB174, 2004 VN112, 2007 TG422, 2012 VP113 and 2013 GP136, the group of researchers came to the conclusion that a hypothetical planet with an orbital period of about 17,117 years (or greater semiaxis of around 665 AU), would have the necessary proportions to influence these objects.
This would correspond to the estimated parameters set by Batygin and Brown for the orbital period of the Ninth Planet or Planet X (10,000 to 20,000 years).
Planet X, the Ninth Planet or referred to as Nibiru by some, has been the planet everyone has wanted to find. The search for this enigmatic celestial body started almost a century ago. For decades, an open debate remains among astronomers about the existence of Planet X, a large celestial body that supposedly orbits the outer edge of our solar system, but so far not a single celestial body that fits the descriptions of Planet X has been found, at least not until now. 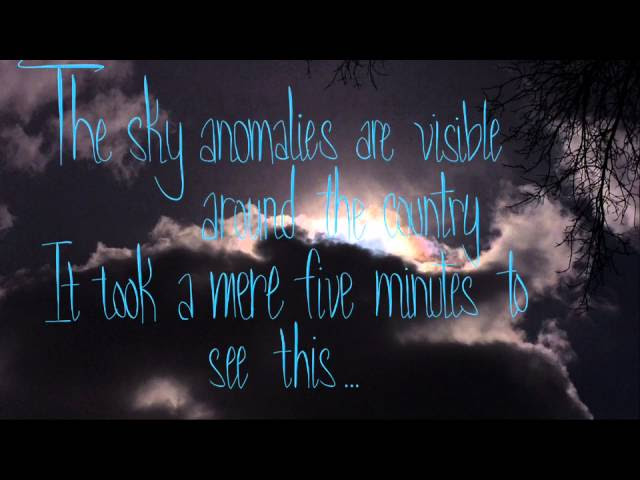 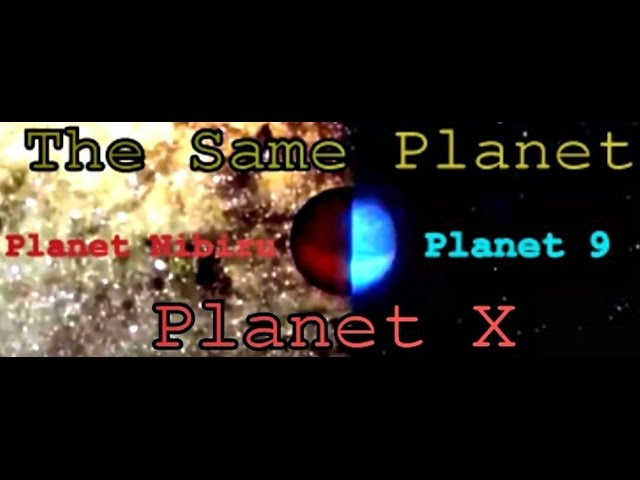 OUT OF MIND » DISCLOSURE » NIBIRU, PLANET X & 9 & SUN SIMULATOR » NIBIRU News ~ US and Russia preparing for Nibiru arrival and aftermath plus MORE