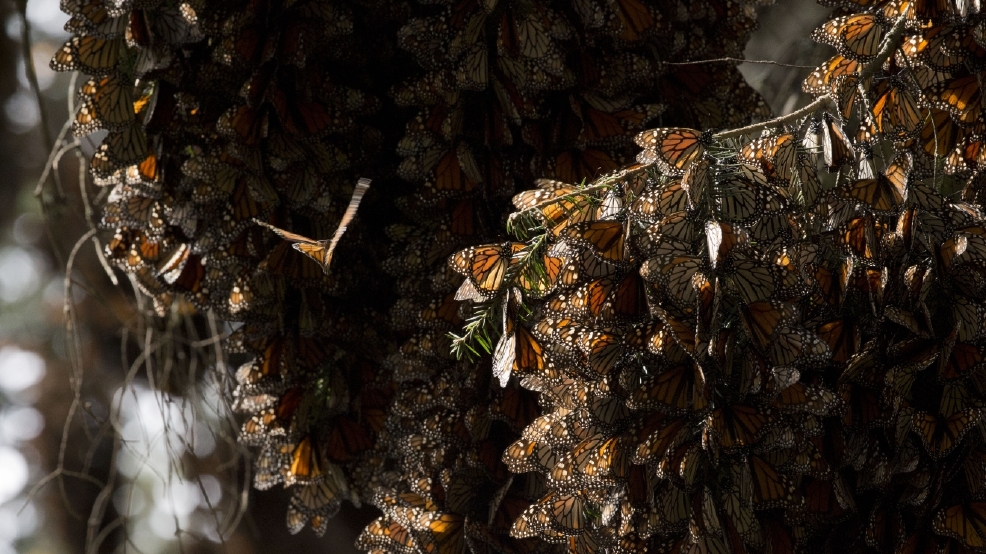 Mexico's environmental protection agency released photos of patches of frost, snow and ice in areas of the butterfly reserve. Activists had expressed concern about the unusual cold snap, because driving rain and bitter cold in 2001 killed millions of monarchs at the reserve.


Mexico City — Authorities in Mexico say the monarch butterflies that winter in the mountains west of Mexico City have survived a severe cold snap that hit the area this week.
Mexico's environmental protection agency released photos of patches of frost, snow and ice in areas of the butterfly reserve. Activists had expressed concern about the unusual cold snap, because driving rain and bitter cold in 2001 killed millions of monarchs at the reserve.
But the agency also released photos Friday showing clumps of butterflies still hanging from trees. They tend to drop off trees when they're frozen.
The agency says its employees observed "branches and trunks covered with butterflies in good condition."
The area covered by the orange-and-black insects in the mountains west of Mexico City this season was more than three and a half times greater than last winter. The butterflies clump so densely in the pine and fir forests they are counted by the area they cover rather than by individual insects.
The number of monarchs making the 3,400-mile (5,500-kilometer) migration from the United States and Canada declined steadily in recent years before recovering in 2014. This winter was even better.
This December, the butterflies covered 10 acres (about 4 hectares), compared to 2.8 acres (1.13 hectares) in 2014 and a record low of 1.66 acres (0.67 hectares) in 2013.
While that's positive, the monarchs still face problems: The butterflies covered as much as 44 acres (18 hectares) 20 years ago.
"The news is good, but at the same time we shouldn't let our guard down," said Omar Vidal, director of the World Wildlife Fund in Mexico. "Now more than ever, Mexico, the United States, and Canada should increase their conservation efforts to protect and restore the habitat of this butterfly along its migratory route."
The United States is working to reintroduce milkweed, a plant key to the butterflies' migration, on about 1,160 square miles (3 million hectares) within five years, both by planting and by designating pesticide-free areas. Milkweed is the plant the butterflies feed and lay their eggs on, but it has been attacked by herbicide use and loss of open land in the United States.
Dan Ashe, the director of the U.S. Fish and Wildlife Service, said that in the first year of that effort, the United States had managed to restore about 250,000 acres (100,000 hectares) of milkweed, and raised about $20 million for the program.
"It is time for celebration because we see the beginning of success," Ashe said. "But our task now is to continue building on that success."
The Washington, D.C.-based Center for Biological Diversity, which is pushing for endangered species status for the monarchs, noted that even with the rebound, the butterflies are still only at 68 percent of their 22-year average. It said in a statement that "the population was expected to be up this winter due to favorable summer weather conditions in the monarch's U.S. breeding areas."
"The increase is certainly great news, but the bottom line is that monarchs must reach a much larger population size to be resilient to ever-increasing threats," said Tierra Curry, a senior scientist at the Center.
In Mexico, meanwhile, illegal logging has remained a problem. It more than tripled in the monarch butterflies' wintering grounds in 2014, reversing several years of steady improvements. Illegal logging had fallen to almost zero in 2012.
Authorities said the reserve's buffer area lost more than 22 acres (9 hectares) in 2015 due to illegal logging in one area, but said the tree cutting was detected and several arrests were made.
The forest canopy acts as a blanket against the cold for butterflies forming huge clumps on branches during their winter stay in Mexico.
Monarch expert Lincoln Brower wrote in a research paper that the 2015 forest loss was actually 25 acres (10 hectares) in the reserve area, and said the illegal logging "questions the effectiveness of current strategies to protect the already precarious overwintering habitat of the monarch butterfly."
The logging took place in a particularly sensitive area of the reserve, and if butterflies can't find shelter there, "they may be forced into forested areas with less microclimatic protection," exposing them to potential cold and rain that can prove fatal, Brower wrote.
Alejandro del Mazo, the head of Mexico's protected natural areas, credited the three countries for their cooperation and said they were on their way to achieving the goal of having 220 million butterflies in the reserve by 2020. Del Mazo estimated there were 140 million this year.
"This is a motivation for us to continue building bridges between our three countries, not walls," Del Mazo said.
The migration is an inherited trait: No butterfly lives to make the full round trip, and it is unclear how they find their way back to the same patches of pine forest in Mexico each year.
Some scientists suggest the butterflies may release chemicals marking the migratory path and fear that if their numbers fall too low the chemical traces will not be strong enough for others to follow.
The long-term trend is troubling. After their peak in 1996, when the monarchs covered more than 44 acres (17.8 hectares), each time the monarchs have rebounded, they have done so at lower levels. The species is found in many countries, but experts fear the migration could be disrupted if very few butterflies make the long trip.
Largely indigenous farm communities in the mountain reserve have received government development funds in return for preserving the 139,000-acre (56,259 hectare) reserve that UNESCO has declared a World Heritage site.
Writer and environmental activist Homero Aridjis, and the chief scientist for Parks Canada, Dr. Gilles Seutin, also suggested that favorable weather conditions may have helped the monarchs rebound this year.
"Although thanks to more favorable weather conditions along the monarch's migratory routes numbers in the reserve this season have increased, this does not mean we can ignore one of the main threats to the monarchs now: the extremely damaging illegal logging taking place within the reserve," Aridjis wrote.