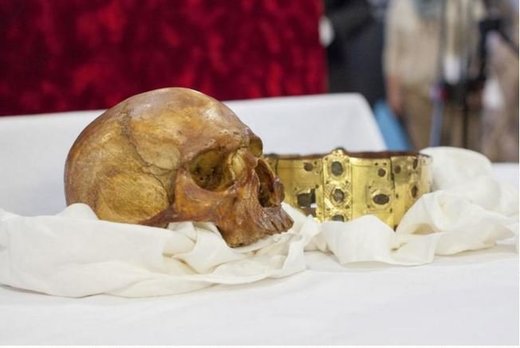 © Mikael Wallerstedt
On April 23, 2014, Erik IX's reliquary was opened at a ceremony in Uppsala Cathedral. After this, researchers from several scientific disciplines set to work running tests on the remains in an attempt to learn more about the medieval king.
For decades, various medieval scholars have labored to prove—or disprove—details of various medieval kings' lives. In recent years, DNA testing has allowed scientists insights into the true lives of medieval rulers and prompted calls for re-examination of the legends and secondary sources that inform their biographical sketches.

Now, a Swedish team from Uppsala University has used forensic analysis to prove that in one king's case, the legends seem to be true.

Erik IX—also called Erik Jedvardsson, Eric the Lawgiver, and Saint Erik—was a Swedish king and Catholic saint, reigning from around 1150 to May 18, 1160. For a king, Erik is something of a mystery—no contemporary Swedish historical accounts discuss him, although he is mentioned briefly in the [url=http://www.northvegr.org/sagas annd epics/kings sagas/the saga of king sverri of norway/014.html]Sverissaga[/url], a near-contemporary Norwegian epic documenting the reign of King Sverre Sigurdsson. The only detailed account of Erik's rule is found in the Catholic legend constructed after he achieved sainthood, describing him as a devoted Christian who codified Swedish law and led a crusade against Finland, only to be decapitated by a rival for the throne. It's a fairly typical medieval saint-king life, from a time when such legends couldn't be counted on for truthfulness. According to the researchers, the basic legend of Erik seems to stem from a longer, much older legend that has since been lost, casting more doubt on its accuracy. Similarly, many scholars now agree that the story of King Arthur mixes centuries of Welsh folklore with a tribal leader who may or may not have existed, so it's not far-fetched to assume that other medieval accounts of kings may do the same.

Despite the lack of biographical details, Erik is well-known to modern Swedes. He is the patron saint of Stockholm, featuring in the city's coat of arms, and his elaborate reliquary is displayed in the Uppsala Cathedral.

This combination of present-day prominence and biographical mystery prompted Uppsala University's interdisciplinary research team to leverage recent advances in forensic technology to uncover more details of his life and death, opening the reliquary in a ceremony in 2014.

Wednesday's press release from Uppsala University explains the exhaustive interdisciplinary research the team utilized in the two years since they opened the reliquary and began their work, including radiocarbon dating, aDNA analysis (ancient DNA), isotope analysis, and forensic medicine. According to the researchers, 23 of the 24 bones in the reliquary belonged to the same individual—there's also a bonus "mystery" shinbone—who was male, between 35 and 40 years old, and died around 1160. The skull shows signs of healed wounds that may have occurred in battle, aligning with the tales of a Finnish crusade. So far, so good.

But the most interesting discoveries surround Erik's death. According to the researchers, "The saint's legend says that in the king's final battle, the enemy swarmed him, and when he fell to the ground they gave him wound after wound until he lay half dead. They then taunted him and finally cut off his head." True to legend, Erik's bones show signs of cuts inflicted in connection with his death and indicate that he was lying face-down during the injuries. Furthermore, one of his neck vertebra was cut through; not only is this consistent with decapitation, the injury could not have been inflicted during battle as the hauberks worn at the time would protect that part of the neck. This aligns with the legend's assertion that he was swarmed in battle, captured, and taunted prior to his decapitation. So while the research doesn't tell us much about what Erik was like as a person, the available evidence of the king's death in no way contradicts the account in Catholic legend.

The full research results will be published in an upcoming article in Fornvännen, a journal published by the Swedish National Heritage Board, and the Uppsala University team will continue performing other forensic tests on Erik's remains for at least the next year. For now, though, the team has concluded that sometimes legends turn out to be true.