[Funny how we knew this all along, but settled science acknowledging this is yet another sign of the awakening and all being revealed! – Z]
Terence Newton, Staff
Waking Times
Cosmic rays and high energy particles are continuously bombarding the earth, electrically charging our atmosphere, reacting with the electromagnetic fields surrounding the earth. Scientists have been looking for the primary source of this accelerated energy for decades, and the new age community has ascribed evolutionary significance to these energies, pointing to 2012 as a key moment when we can have full and direct access to this energy.
To scientists and spiritualists alike, there is deep curiosity about what is happening at the innermost reaches of our galaxy.
In an unprecedented scientific discovery, researchers have now verified that the black hole at the center of our galaxy is acting as an intense energy accelerator. The H.E.S.S. (High Energy Steroscopic System) Observatory in Namibia, Africa is run by an international collaborative team made up of 42 institutions in 12 countries, and has or decades been mapping the very-high-energy gamma rays emitted from the center of our universe.

“A detailed analysis of the latest H.E.S.S. data, published on 16th March 2016 in Nature, reveals for the first time a source of this cosmic radiation at energies never observed before in the Milky Way: the supermassive black hole at the centre of the Galaxy, likely to accelerate cosmic rays to energies 100 times larger than those achieved at the largest terrestrial particle accelerator, the LHC at CERN.” [Source]

A new mapping of these phenomenon identifies a relatively small concentration of super high energy gamma rays focused at the very center of the Milky Way, pointing to a link between energy acceleration and several key objects found in this region.

“Somewhere within the central 33 light years of the Milky Way there is an astrophysical source capable of accelerating protons to energies of about one petaelectronvolt, continuously for at least 1,000 years”, says Emmanuel Moulin (CEA, Saclay). [Source] 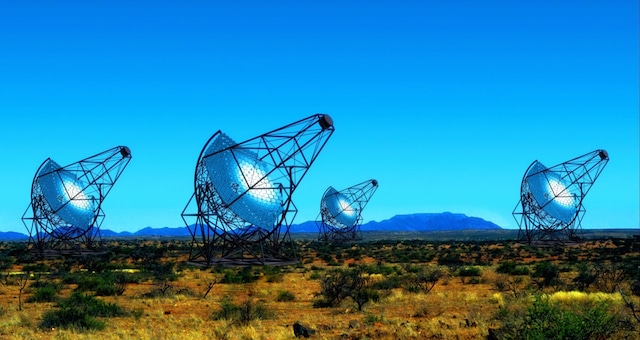 The evidence now indicate a massive black hole at the galactic center, known as Sgr A*.

The centre of our galaxy is home to many objects capable of producing cosmic rays of high energy, including, in particular, a supernova remnant, a pulsar wind nebula, and a compact cluster of massive stars. However, “the supermassive black hole located at the centre of the Galaxy, called Sgr A*, is the most plausible source of the PeV protons”, says Felix Aharonian (MPIK, Heidelberg and DIAS, Dublin), adding that, “several possible acceleration regions can be considered, either in the immediate vicinity of the black hole, or further away, where a fraction of the material falling into the black hole is ejected back into the environment, thereby initiating the acceleration of particles”.  [Source]

Many thinkers and spiritualists have attributed significant meaning to the cosmic radiation emanating from the center of our galaxy, often ascribing the evolution of human consciousness to the earth’s temporal relationship to the source of these energies. To many, the year 2012 was supposed to mark a turning point for humanity, as the earth was to begin moving closer to the galactic center, increasing our proximity and openness to cosmic radiation that would nourish consciousness and push us toward evolution.

“The Earth is leading the ascension of mankind. And she made her ascension on the 12-12-12 date. She is now positioned in such a way that she is drawing direct information from the Central Sun. Without such a perfectly orchestrated astronomical repositioning, universal information would remain restricted to the linear reality that currently exists.
On December 21, we suddenly gained access to all points within the Universe. This has automatically opened our world to the intelligence and information that has been present on these other worlds all along. It has opened the doorways to our infinite potential.” [Source]

While not exactly scientific, this viewpoint does compel the imagination to wonder what does lie at the center of our galaxy, and what is the central driving force of the intense radiation coming from? And most importantly, how does this information affect human consciousness?
About the Author
Terence Newton is a staff writer for WakingTimes.com, interested primarily with issues related to science, the human mind, and human consciousness.
This article (Scientists Identify Cosmic Energy Accelerator at the Galactic Center) was originally created and published by Waking Times and is published here under a Creative Commons license with attribution to Terence Newton and WakingTimes.com. It may be re-posted freely with proper attribution, author bio, and this copyright statement. Please contact WakingTimes@gmail.com for more info.
+++
ZenGardner.com