An unbelievable UFO sighting has recently surfaced on the internet. It shows how a cloud orb is snooping around an airplane while performing countless maneuvers in a matter of seconds. The footage is truly unique as it reveals the out-of-this-world capabilities of these alien devices.


Australian sky watchers continue to surprise with the sightings they capture. Each month the UFO community is enrichened with various footage showing UFO activity of every sort, with the most common appearance being the orb-UFO or cloud orb. These speeding objects can be seen with the naked eye during the night, while in daytime they are tricky to observe without the proper equipment that allows for a full spectrum view.

The cloud orb example from below was shared with the UFO community on March 23, 2016, by YouTube user colourufo. It reveals how a flying device is snooping around an airplane that’s presumably spraying chemtrails. The sighting is fascinating on its own although it was caught from afar. The speed at which this UFO is moving, coupled up with the extremely odd turns it performs, reveals its otherworldly nature. Now, I would like to call it a drone and easily debunk it as a misconception, but all of the above mentioned traits make it hard to be interpreted as an earthly device.
Here is what the sky watcher who filmed this had to say: “The camera used was a Canon XA 25 full HD with I.R. 850 optical filter fitted. Daytime capture…this UFO size was possibly 9 to 15 meters in diameter. This craft passed above the chem trail at high speed.”


At first sight, the UFO is seen moving at a dazzling speed just below the trail left behind by the airplane. It quickly disappears over the treetops, but only to return for another round of scouting or whatever it is doing. This time the sky watcher is focusing on the plane and locks in to the UFO as soon as it makes its presence noticed. The speeding device is dashing right in front of the plane, going so quick that the cameraman can’t keep up with it.
After slowing down parts of the video, the UFO is clearly seen while performing some really interesting maneuvers. Despite the traveling speed, the flying object is still able to perform some really tight turns. It doesn’t follow a specific flight patter, but instead it juggles through the air whenever it deems necessary. See at 1:50 how it performs a “U turn” just when reaching the tail of the airplane. After this brisk maneuver, the bugger doesn’t follow a defined flight pattern, and instead of going in a straight line like we would expect, it continues to defy the laws of phisics by going up and down, up and down, then it stops and hovers nearby while doing a few circles in the air.
Note that all those brisk turns and maneuvers are performed in a few fractions of a second and unless the footage wouldn’t be slowed down, our eyes couldn’t perceive what’s happening up there. Alas, the cloud orb appears to be facing the plane while moving energetically, indicating that it could be gathering the desired insight from the chem-plane. It’s absolutely amazing to witness something like this, knowing that there could be advanced devices across the world that are scouting and analyzing what we humans are doing on this planet.
It’s intriguing and at the same time fascinating to know that there are other intelligent lifeforms on Earth that contribute in a way to all the things going on around and above us. In my opinion, these cloud UFOs could be A.I. devices or even sentient beings that are far more complex than we imagine. They could be studying our collective behavior and send this data to other species of ETs that reside in the Milky Way galaxy or beyond. This isn’t just a possibility anymore. They are here and we are witnessing their presence on a daily basis. It only remains a matter of time until they’ll reveal to us or until we’ll decipher them better.
There are numerous possibilities when speculating about these UFOs, but the most certain thing is that they exist and they are watching us from the shadows. Until the hour of disclosure arrives, I suggest we all stay vigilant and share this knowledge with as many open-minded people as possible. 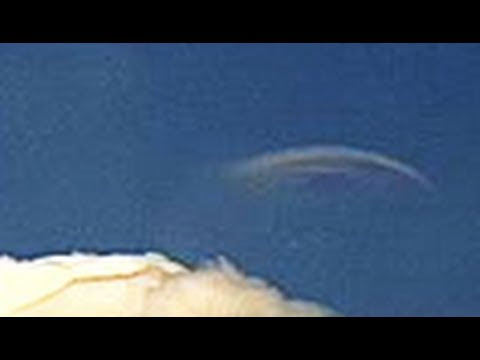 Published on March 25, 2016 in Unexplained by CreativeChaos

Brazil has been a hotbed for UFO sightings ever since the 1900s, and there are numerous reports highlighting their presence, either through video footage, testimonies and even objects detected on ground radars and pursued by the military.

A group of UFOs was filmed over Sao Paolo, Brazil, in August, 2014. The objects are hovering over a populated area of the city, changing altitude and performing a few brisk turns; they vary in size and have an unusual glow that’s making them visible throughout the night sky. All of them appear to slowly pulsate and are ‘playing’ above the city undisturbed by the fact that locals could be filming them.
After a couple of minutes, the unidentified objects descend upon the ground with haste, making them unlikely to be helicopters or drone devices. So are these UFOs extraterrestrial in nature? What earthly device could otherwise imitate their performance?

While skeptics consider them to be drones, their bizarre characteristics make them likely to be otherworldly in nature. Many countries admitted and declassified their UFO files, indicating that this phenomenon is real, but it either remains unexplained or partially classified, the reasons for it being debatable. The flying objects from the video above could be organic in nature because of the complex moves they execute, but there is also the possibility of them being artificial crafts. After all, there are numerous cases of such objects detected by the ground radars, or even pursued by military jets or helicopters.
Brazil, where the above sighting occurred, has other documented cases involving UFO presence on ground radar. On May 19, 1986, a wave of unidentified flying objects appeared over the country and the Brazilian air-force had to send a few jets to inspect the anomaly caught by the radar. Here is what the Brazilian Minister of Aeronautics, Brigadier General Octavio Moreira Lima had to say about it:
“At least 20 objects were detected by Brazilian radars. They saturated the radars and interrupted traffic in the area. Each time that radar detected unidentified objects, fighters took off for intercept. Radar detects only solid metallic bodies and heavy (mass) clouds. There were no clouds nor conventional aircraft in the region. The sky was clear. Radar doesn’t have optical illusions. We can only give technical explanations and we don’t have them. It would be very difficult for us to talk about the hypothesis of an electronic war. It’s very remote and it’s not the case here in Brazil. It’s fantastic. The signals on the radar were quite clear.”
If the objects appear on radar clearly points towards their artificial nature, and since this incident happened back in the 80s, a drone scenario remains highly unlikely. But are there any reports of downed or captured UFOs? The official information we have at our disposal only shows a distant perspective of the UFOs, and there are no reports of recovered crafts either, but there is no denial the phenomenon is real.
Another case from 2014 shows how a flying device is chased by a Black Hawk helicopter belonging to the Aguadilla Cost Guard across the airport and all the way to the ocean, where the speeding craft descends into the water unaffected by the hydrodynamic forces. Judging by these intriguing reports, it’s logical to assume that alien technology, if this is the case, is far more advanced than what we have at our disposal, thus making their pursuit a rather complicated if not impossible task. 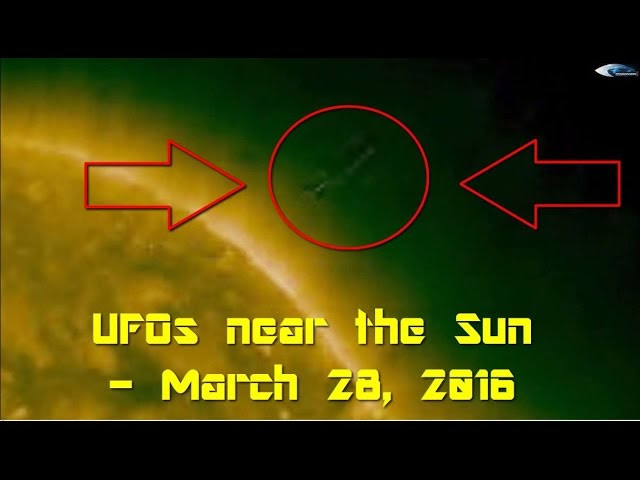 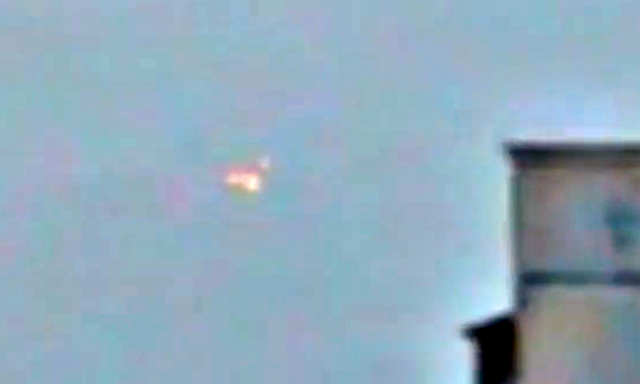 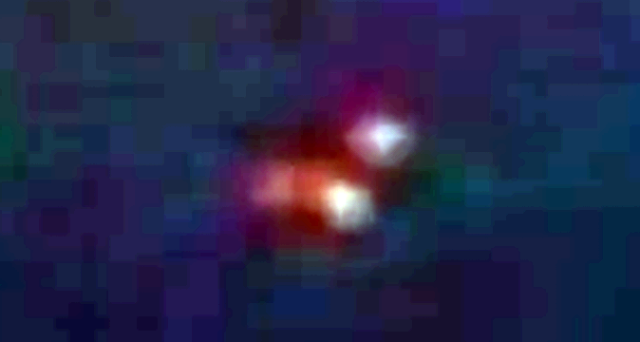 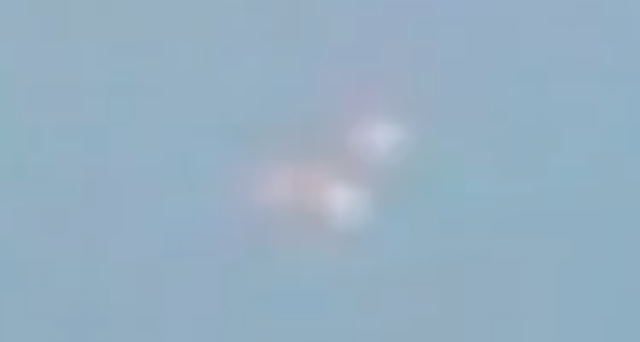 This looks like a TR3B, or similar technology near Putins home. If it is a TR3B, it means Putin has some serious tech! Imagine flying from the earth to the moon in under a minute. That is a lot of power there. If its aliens visiting Putin, then he may have just acquired some very powerful friends. Either way, Putin is winning.
Scott C. Waring
www.ufosightingsdaily.com

News states:
Aliens head for VLADIMIR PUTIN' as UFO spotted over Russian leader’s home city BIZARRE footage has emerged online appearing to show a triangular UFO hovering in the skies over Russian president Vladimir Putin's home city of St Petersburg. The mystery orb, which appears to show three static glowing lights formed into a triangle formation, was caught on camera by Vyacheslav Golovkin. The saucer stays completely still through the two-and-a-half minute video and then appears to burn out from the overcast sky. The footage as been seen 68,000 times as conspiracists try and unravel the mystery. Mr Golovkin says: "I noticed the object above the mountain and began to film it. It moved slowly down the mountain and faded out as it got lower." A plane is seen flying overhead, providing the unidentified flying object (UFO) is not a normal aircraft. 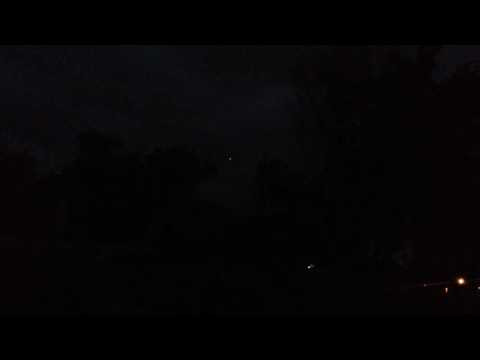 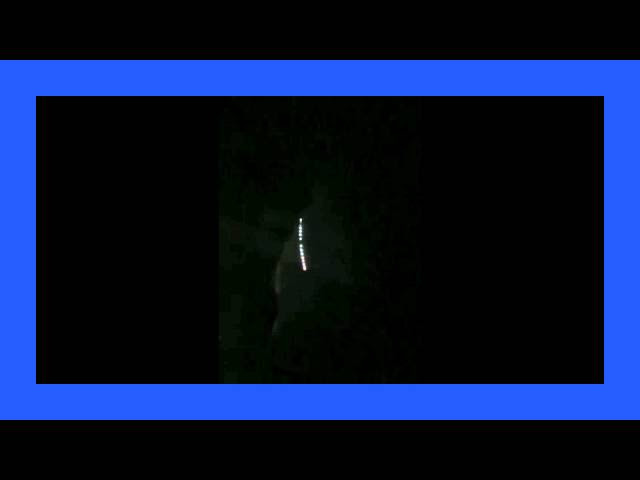 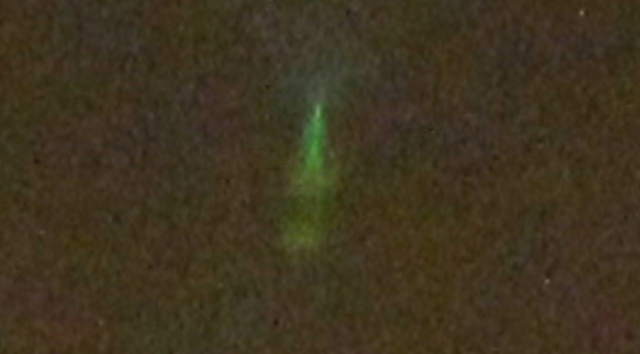 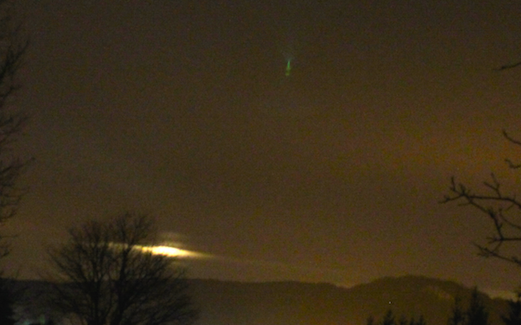 This green UFO was seen in France this week and it looks like its cloak was revealed because of the angle of the setting sun in the distance. He saw it with the naked eye, and followed it with his camera. Excellent catch of a light ship,
Scott C. Waring
www.ufosightingsdaily.com

Eyewitness states:
I was taking pictures of French mountains with a friend, using long exposure time, on a small path close to the town, when I saw a strange light among the clouds. I first thought it was the moon but then I remembered it was a day of new moon. Besides, it was moving slowly, back and forth laterally. I was fascinated, I did not know what it could be at all, but it was beautiful, so I took a picture. It is a 10 seconds exposure so the object is blurry because of its motion. The light around it looked unreal, as if it was a very powerful but very far object, above the mountains. That is why I thought then it was an UFO. My friend was amazed too. Gradually, the light became dimmer, and the object vanished in the dark in a few seconds. All that remained were clouds. We got home. 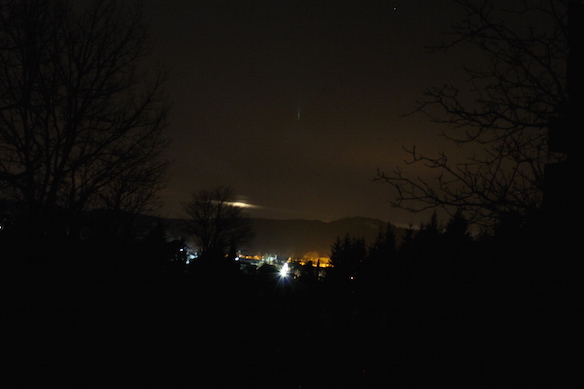 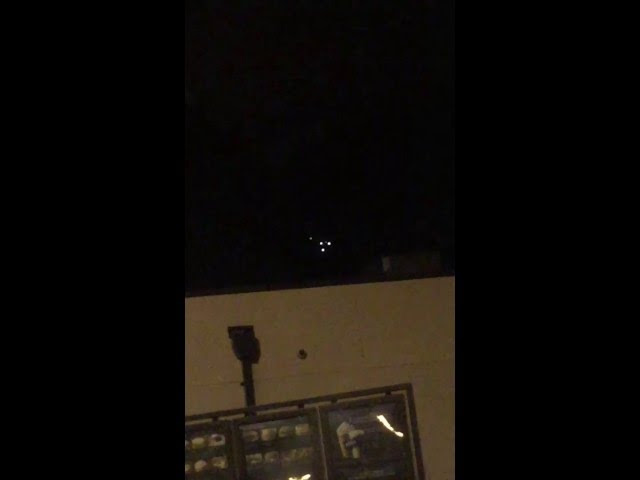 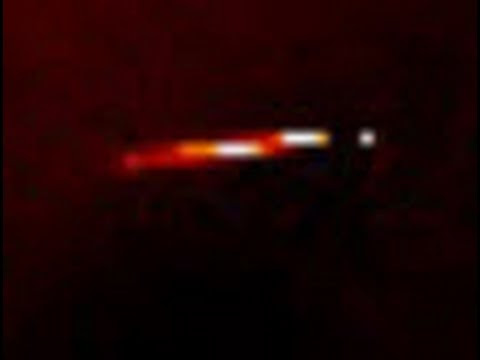 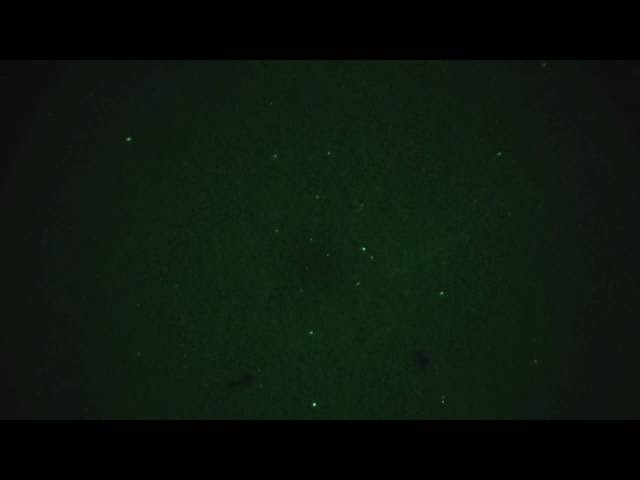 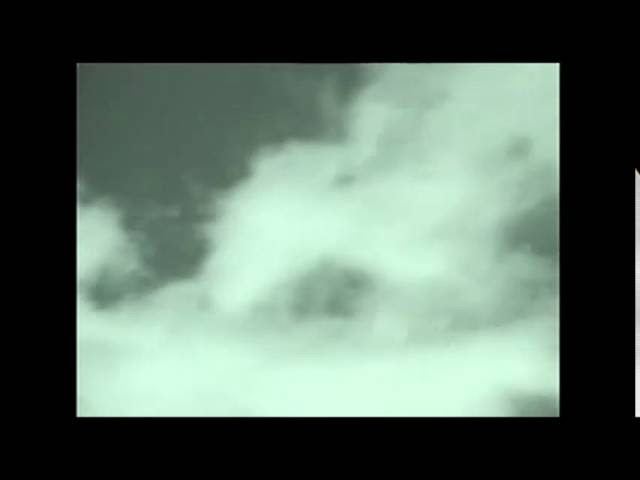 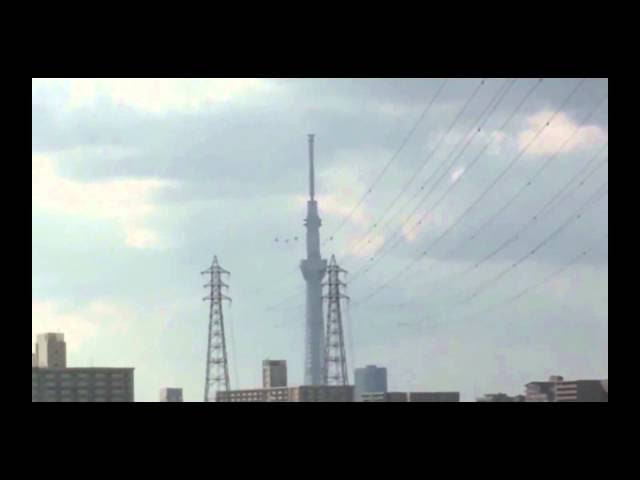