OUT OF MIND » THE INSANITY OF REALITY » GOVERNMENTS & THE NEW WORLD ORDER » UPDATES: Hijacked EgyptAir Flight In Cyprus 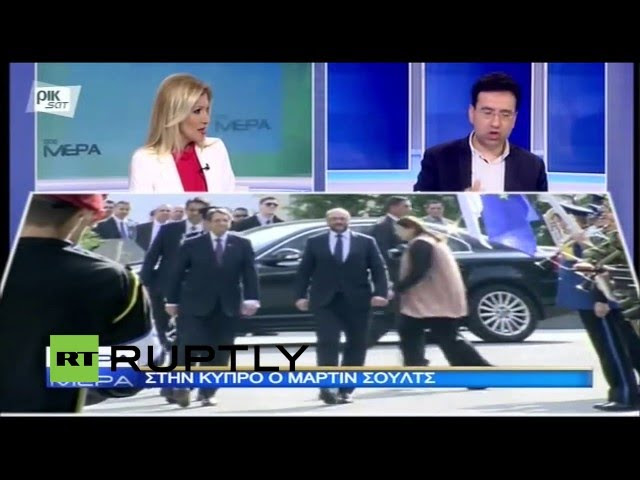 Admin
Posts : 106749
Join date : 2012-01-04
Location : Woodstock Nation
Everything We Know About the EgyptAir Plane Hijacked and Diverted to Cyprus

The suspected hijacker of an EgyptAir airliner surrendered to authorities at Larnaca airport in Cyprus on Tuesday, according to local officials, with all passengers released unharmed. The Egyptian man, whose motives remained a mystery, emerged from the aircraft with his hands in the air, Cypriot state TV said.
"Its over," Cyprus's foreign ministry said in a tweet. Cypriot authorities have determined that the belt worn by the man did not contain explosives, Egypt's Civil Aviation Ministry said in a statement.
"Security in Cyprus confirmed that the explosive belt worn by the man who hijacked the plane was fake," it said.
The EgyptAir flight from Alexandria to Cairo was hijacked on Tuesday morning and forced to land in Cyprus.

Eighty-one people, including 21 foreigners and 15 crew, had been onboard the Airbus 320 flight when it took off, Egypt's Civil Aviation Ministry said in a statement.
Conflicting theories emerged about the hijacker's motives, with Cypriot officials saying early on the incident did not appear related to terrorism but the Cypriot state broadcaster saying he had demanded the release of women prisoners in Egypt.
After the aircraft landed at Larnaca airport, negotiations began and everyone onboard was freed except three passengers and four crew, Egypt's Civil Aviation Minister Sherif Fethy said.
Soon after his comments, Cypriot television footage showed several people leaving the plane via the stairs and another man climbing out of the cockpit window and running off.
The hijacker then surrendered to authorities.
Flight MS181 took off from Alexandria's Burg el-Arab airport and apparently diverted north shortly afterwards, landing in Larnaca just before 9am, according to local media.
The pilot of the plane was threatened by a passenger who had an explosive belt, Egypt's Civil Aviation Ministry initially said, but it was later reported that there were no explosives on board.
The head of Alexandria's airport told the BBC that eight Americans, four Britons, two Belgians, one Italian, four Dutch, and 30 Egyptians were on board the flight.
"It is not something which has to do with terrorism," Cypriot President Nicos Anastasiades told reporters. It's all to do with a woman... We are doing everything to release the hostages." The hijacker has asked for the release of female prisoners in Egypt, the Cyprus state broadcaster reported.
There was also some confusion over the identity of the hijacker. Egyptian state media agency MENA initially reported the hijacker was an Egyptian national named Ibrahim Samaha, but gave no other details about him.
It was subsequently claimed by staff at Alexandria University — where Samaha is reportedly a professor of veterinary medicine — that he was a passenger on the plane and not the hijacker.
Gamal al-Omrawi, a deputy dean at Alexandria University, said he had spoken by phone to Samaha, who confirmed that he was one of the passengers who was released.
Cyprus' foreign ministry on Tuesday identified the hijacker as Seif Eldin Mustafa in a tweet. It did not provide further details.
Cypriot state media reported that the hijacker had demanded asylum in Cyprus. Another report from a Cypriot newspaper said the man had asked for a four-page letter to be delivered to his ex-wife who lives there. The ex-wife was being taken to the airport, according to a report around 11.45am local time by Al Arabiya.


Israel scrambled warplanes in its airspace as a precaution in response to the plane hijacking, according to an Israeli military source.
The hijacking raises further questions about Egyptian airport security after militants brought down a Russian passenger flight over the Sinai in October with an explosive device. 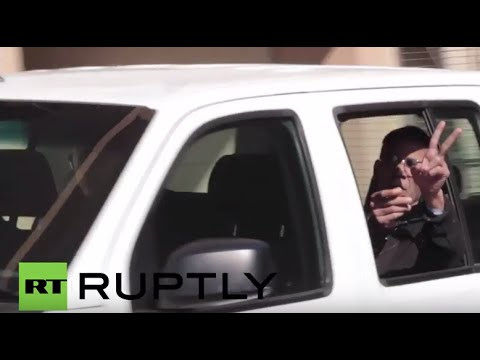 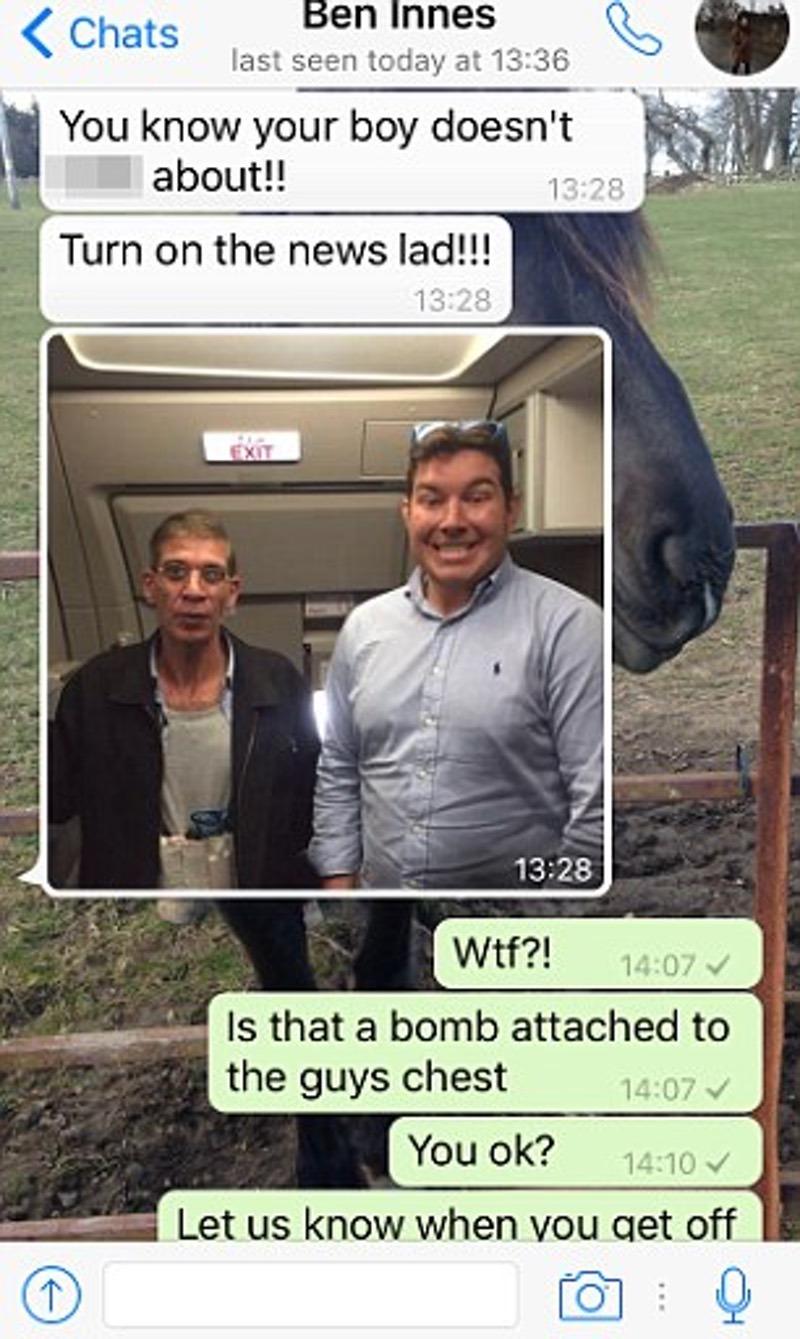 Seif Eldin Mustafa hijacked an EgyptAir flight on Tuesday morning shortly after it left Cairo by producing a fake suicide belt and forcing the pilot to divert the aircraft to Larnaca airport in Cyprus.
At some point during the hijacking, 26-year old Ben Innes from Leeds, England, decided to snap a photo with Mustafa, and sent it to his roommate Chris Tundogan via WhatsApp.
"You know your boy doesn't fuck about!!" he wrote, according to an exchange that Tundogan shared with the Daily Mail, a British tabloid. "Turn on the news lad!!!"
Tundogan responded with concern.
"Wtf?" he wrote in a series of messages. "Is that a bomb attached to the guys chest? You ok? Let us know when you get off."

"I have no idea why he took the selfie but I imagine he probably volunteered to take it as he's not afraid to shy away from anything," Tundogan told the Daily Mail. "I find it pretty mental but that's just Ben I guess!"
Both men seem surprisingly at ease in the picture, which may have been taken while the aircraft sat on the tarmac in Larnaca as hostages were being evacuated. Mustafa is still wearing the dummy suicide belt, which Cypriot Foreign Minister Ioannis Kasoulides later told reporters was made up of cellphone cases rather than explosives.
When the aircraft landed in Larnaca, Mustafa reportedly tossed a letter written in Arabic onto the tarmac and requested that it be delivered to his Cypriot ex-wife.
Related: Everything We Know About the EgyptAir Plane Hijacked and Diverted to Cyprus
After authorities began negotiations, 74 of the 81 passengers onboard were freed. Three passengers and four members of crew remained onboard. Innes was reportedly one of the final three. Mustafa ultimately surrendered and nobody was injured.
Kasoulides said Mustafa had initially threatened to detonate his belt and demanded that the aircraft be refueled and leave for Istanbul. "It looks like he realized his demands would not be met, allowing the last two hostages, Britons, to flee the aircraft," Kasoulides said. "He was arrested."
Flight MS181 took off from Alexandria's Burg el-Arab airport on Tuesday morning and was bound for Cairo. The plane's pilot, Omar al-Gammal, told authorities that Mustafa appeared to be wearing an explosive belt and forced him to divert the aircraft to Larnaca airport in Cyprus. Gammal told Reuters that the hijacker seemed "abnormal" but that he was obligated to treat him as a legitimate security threat.
Although the incident was not related to terror groups, the fact that Mustafa was able to board an aircraft with enough materials to build a believable looking suicide belt has raised serious concerns over Egypt's airport security. Last October, the Islamic State claimed responsibility for planting a bomb on board a Russian aircraft, which crashed shortly after leaving Cairo, killing all 224 people onboard.

OUT OF MIND » THE INSANITY OF REALITY » GOVERNMENTS & THE NEW WORLD ORDER » UPDATES: Hijacked EgyptAir Flight In Cyprus