Bright Spots on Ceres could be Portals leading into the planet

According to an article by sciencemag.org, the mysterious bright spot on the dwarf planet Ceres has been revealed in its highest resolution yet, and the bright materials in it appear to be coming from a fractured dome —a possible portal to icy materials in the subsurface.

US scientists have released the latest images of dwarf planet Ceres and argued that the mysterious spots on its surface could, in fact,  be ‘portals’ leading into the planet.

Scientists participating in the 47th Lunar and Planetary Conference, which began on March 22 in Woodlands, USA, presented new results on the study of Ceres, according to which the strange white spots that appear on the surface of the dwarf planet could be a sort of portal leading into the dwarf planet, according to NASA.
The latest high-resolution images beamed back by the Dawn Spacecraft display even more unusual features in a never before seen detailed view of Occator,a crater of up to 90 kilometers in diameter and 4 kilometers in depth where the enigmatic bright spots on the dwarf planet are located.
Scientists have identified multiple overlapping linear fractures inside the crater with bright spots at its center.

Interestingly, in December last year, scientists from the Dawn Spacecraft reported a haze of water vapor above the crater which grows during the day when temperatures rise on the planet and disappears at night when the temperature drops on the dwarf planet.
Located at the center of the Occator crater is a 9-kilometer-wide shaft with a 2-kilometer-wide dome which can be appreciated at the center.

According to newest reports, researchers have also found evidence that the bright material on the surface of the crater could be a residue of minerals and frozen water. This, however, still remains an unconfirmed theory.
According to the report, The largest bright spot is associated with the 9- km-wide central depression, or pit. A 2-km-wide central dome (similar to those on Ganymede/Callisto) occupies the floor of the pit [2] (Fig. 4). The association of prominent bright spots with the central structure suggests that either uplift or localized extraction or extrusion of compositionally distinct material is involved in bright spot formation in the most strongly uplifted zones of large craters on Ceres. The dome also has a distinct color and perhaps a different evolution [6]. 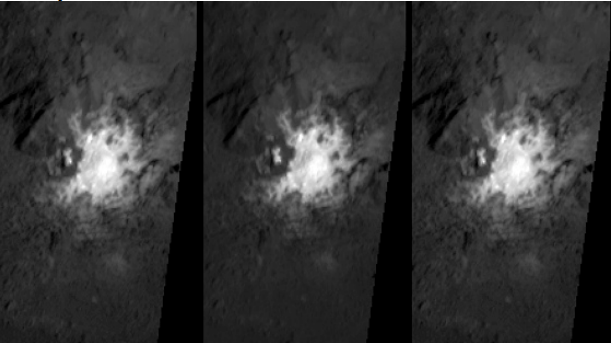 Interestingly, according to observations made by ESO’s La Silla Observatory in Chile, after studying the enigmatic bright spots that have caused confusion among astronomers ever since their discovery, the team noticed a series of changes which occur as Ceres rotates. The spots appear to brighten during the day and showed other variations that have caused confusion among astronomers.
The first explanation presented by scientists is that the material present on the surface of the dwarf planet causes the anomalous spots to evaporate in sunlight. This theory however, has not been widely accepted.
While trying to explain the mysterious bright spots on Ceres, scientists have come up with a wide range of explanations suggesting these could be caused by salt deposits, ice and well… even flashes of light made by aliens.