Meditation mantras in the ancient Egyptian language are reverberating inside His underground temple. What an uplifting, magical, sound it is! If only you could hear it!

The marvelous, white, pyramids are reflecting the moonlight, shining like precious jewels from the Heavens. Aeons ago, they used to lit the night even brighter than the sun lights up the days – or so it is said. Nobody alive today has ever seen this magic... except for the Master, of course. His life is endless, like time itself.

Nearby, the mighty Sphinx guards this holy land from the shadows, with his cold limestone face gazing at his namesake constellation. 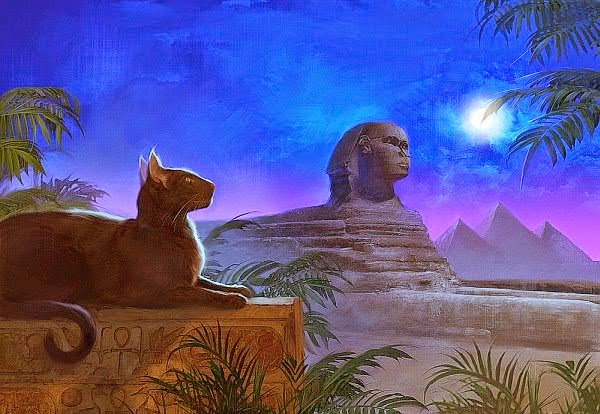 
Beneath it, in the underground chambers, an important ceremony takes place.

Thirteen priests standing in a circle, all dressed up in ceremonial robes with black hoods, are chanting mantras forbidden to the rest. One of them is the high priest, distinguished only by his black-painted lips.

The chamber has a very high ceiling, painted as the Heavens above, and three of the walls are adorned with Egyptian symbols – stories that only the Master knows from experience.

The forth wall radiates forgotten glyphs, in the language of the precursors, in turquoise light. They look just as they are: out of this world.

In the middle of the circle formed by the priests, a huge crystal ball is being levitated by the magic chants. It seems to be feeding Source-light to the strange signs of the fourth wall, making them glow.

A very tall and skinny figure, approaches the ceremony. He is levitating two palms above the floor.

His ceremonial suit is made of metallic scales, beautifully adorned. They are shining! His suit is shining!

His bonny face strongly resembles that of the Sphinx – just as it should.


His eyes are shut. His elongated skull is a distinct feature of Royalty.

An odd-looking necklace, made of solid gold, hangs on his long and skinny neck. The Ankh-shaped pendant is adorned with a reversed teardrop crystal, which radiates powerful turquoise light. The Royal One holds a metallic staff in his right hand, which ends with the head of the Royal Snake. Its eyes are also shining.

Behold, the Master is shining!
The mantras turn into a collective hum and the crystal globe begins to descend, while its surreal glowing slowly fades. It eventually rests on a golden pedestal beautifully ornamented with gems, and its glowing stops. The strange marks on the forth wall stop glowing as well, but they do not disappear entirely.

Has the globe magically carved them into solid rock, or had they been previously carved and the crystal globe simply made them shine? What a fascinating mystery!

The feet of the Royal One touch the ground and his big blue eyes open wide. His pendant also stopped radiating powerful light, though a discreet turquoise “flower of life” is still visible inside the crystal.

The buzzing of a thousand bees filled the room for a moment, then the solid rock of the fourth wall opened West and South in front of the Master, silent as the whisper of sleep.

A long tunnel appeared where solid rock stood previously. There were no torches on the walls, but magical light – in turquoise and purple tones – lit the corridor.

The priests formed two rows behind the high priest and uncovered their shaved heads. The head of the high priest is also elongated. He is the illegitimate son of the Master, by a high priestess. His eyes are deep blue, but he is not shining like his Father.

They all align behind the Master. What an honor this is! How many mortals have ever stood so close to Him? Not even the high priest has been so close to his Father before.

The difference in size is now striking. They all look the size of young boys, as compared to their Master. Not taller than His chest, the illegitimate son stands, and he is taller than any of the priests.

The Royal One starts walking and the procession follows. For each one of his slow paces, the priests make two.

As soon as he enters the corridor, his necklace “awakens” once again and more unknown glyphs appear on the walls of the tunnel, as He walks by.

The priests follow Him silently, with their palms united in prayer and their heads down... but their eyes are curious and restless. They've never been here before.

“Where does this corridor leads?”, they all wonder.

The light from the necklace triggers magical thunders in front of the procession and a formerly invisible "storm-shield," opens up.

The priests shiver with fear. They've never seen this magic before and it is frightening, but they don't make a sound. Gathering all of their willpower, they follow the Lord through the opening. Their knees are almost shaking. What if something happens to them? They all cherish their lives so much!

At the end of the corridor, the solid rock opens up before their Master once again.

His powers are feared and His name revered. He can crush them all with a simple gesture of the staff. It's not like it didn't happen before. Not even the respected priesthood is safe around Him. Respected by the masses, that is. To Him, they are little more than the rest of the crawling worms. Black scarabs, perhaps.

They cautiously follow the Master through the opening and into a massive chamber, shaped like nothing they've ever seen before. All of the chambers they know have straight walls and flat roofs, but this one is... rounded... like a woman's bosom. What a marvel!

In the middle of the chamber, the Master's chariot of fire stands.

It's shining like His Divine costume: metallic in the darkness of the chamber, and brighter than the sunlight outside.

Truth be known to all, the Master IS the Sun!

His words are powerful commands that everyone obeys without delay. Even his Father bowed his head before Him, when He took command of the world by His Own Divine Power.

The chariot of fire started glowing brighter than gold in the sunlight, when the Master approached it.

The helmet of the Sacred Snake upon His head rested and addressed his subjects one last time. Louder than a thunder His Blessed voice became. It came from above and below and from the walls around, louder than any sound ever heard before:

And the priests shivered with fear and dared not look at their Lord.
[/size]

Then the Heavens opened up and the brightest light shone upon them, almost blinding them. And the Master was enveloped by the Holy Light of the Sun that He Himself WAS and IS, and His chariot of fire took him in its belly and lifted Him from the ground and straight up to the Heavens it went. Faster than the fastest wind and brighter than the brightest sun.

And that was the day when the last God walked amongst humans. RA-MARDUK was His name, the Supreme God of the world and the Heavens above and beyond.

Then all priests bowed before His son and listened to his commands:

» Scientist Claims Humans Are Not From Earth But Evolved On Another Planet
» More proof Humans were not on Earth first? Fascinating
» Was There a Race of Giant Humans on Earth?
» Can humans sense the Earth's magnetic field ?
» 15 Alien Races Abducting Humans On Earth! MUST WATCH!!!