The Pyramids of Giza are considered one the greatest wonders of the world. Gerald Massey (29 May 1828-29 October 1907) was a poet and author of spiritualism. He was best known for his book Ancient Egypt: The Light of the World. He soon died after the book was published but it remains a staple today in academic circles.  I remember reading a profound statement Massey made (and I paraphrase) when he said although he has been studying ancient Egypt for over 40 years, he felt his knowledge base on ancient Egypt was that of a child!
I wonder where his knowledge base would have been if he lived during our times; advanced enough to put the pieces together?  There has been a tremendous amount of theories regarding the pyramids. In the earliest phases archeologist believe pyramids where nothing but tombs for the pharaohs. In essence, they believed the larger than life a pharaoh was correlated to the size of their pyramid.

'Herodotus, in the 5th century BC, who has been called the “Father of History” wrote that Cheops never used the great pyramid as a tomb, but was buried elsewhere, “in a subterranean region on an island surrounded by the waters of the Nile." '

Later theories morphed into showing the power of Egypt and they were aligned with celestial markers to honor their gods. Many dedicated authors studied over large chunks of their lives and have built compelling cases but it just might be really simple. Due to theft and looting we have been left with a shell and architectural clues. Suppressing the truth of the Great Pyramids of Giza leads back to the elite protecting their systems in order to stay filthy rich.
What we are looking at, when evaluating the Pyramids of Giza, was a multi-purpose energy system. This was free energy afforded to all of the people. All homes enjoyed light and power even the most rudimentary batteries stayed charged. I discovered a cymatic match on the Sumerian Tablet of Shamash which shows a particular frequency embedded in stone. I began to understand the ancient people used sound to move objects.

Recording of sound from near the Earth’s core

The Pyramids of Giza harness the very sound waves from the inner core of the earth. Humans cannot hear the frequencies from the Earth but sound waves are emanating from the Earth. These pyramid cultures flourished because they took care of the basic needs of the people. This is exactly why these ancient empires lasted thousands upon thousands of years.
The Great Pyramid is flat dab in the center of the earth’s land mass and also acts like a fulcrum. This design takes advantage of the sound waves pushing out of the inner core into the shafts. Where the limestone dampens the low frequencies and only allows the highest frequencies to emanate out of the pyramid. The pyramids where coated with gold which conducted these high frequencies. This is why there was such a quest for gold from these ancient civilizations because it led to power…just not the kind most think!
Based on the size of the Pyramid of Giza a field of free energy was created around Egyptian cities. The ancient word for battery was djed and any battery in this field was constantly charged. Ankhs in this field had increased power and the darker the skin the higher the frequency a person could conduct. Rods were used to direct this power in a field for the intended purpose.

The Pyramid of Giza is essentially the world’s largest Pepco station! Due to its enormous size massive amounts of high frequency could be generated. The field must have gone out for hundreds of miles! The Pyramid of Giza was flooded with water because sound travels about 4 times as fast in water as it does in air. Which means the high frequency were moving with increased velocity by the time it hit the crystals.
Due to the partial covalency of water's hydrogen bonding, electrons are not held by individual molecules but are easily distributed amongst water clusters giving rise to coherent regions capable of interacting with local electric and magnetic fields and electromagnetic radiation .
Can you imagine living in a country that not only was responsible for the infrastructure and development of the nation, but provided FREE energy to the people? This was a time when people actually worked together and did amazing things because of FREE energy. Any device which required power was automatically powered if it was in this field; the caveat is you would have to know the tune.
The elements used to design the high frequency power stations were ferreted away after Napoleon’s “scientific” expedition. Soon after Napoleon’s return new patents for electronics began to emerge. After Napoleon’s army left the pyramids unprotected the ransacking began; but rest assured the components of the high frequency generator had already been removed. Knowing the Pyramid of Giza is a high frequency generator allows us to reverse engineer the necessary components based on the architecture of ALL of the shafts. Including the King and the Queen’s chamber, as they like to call it. 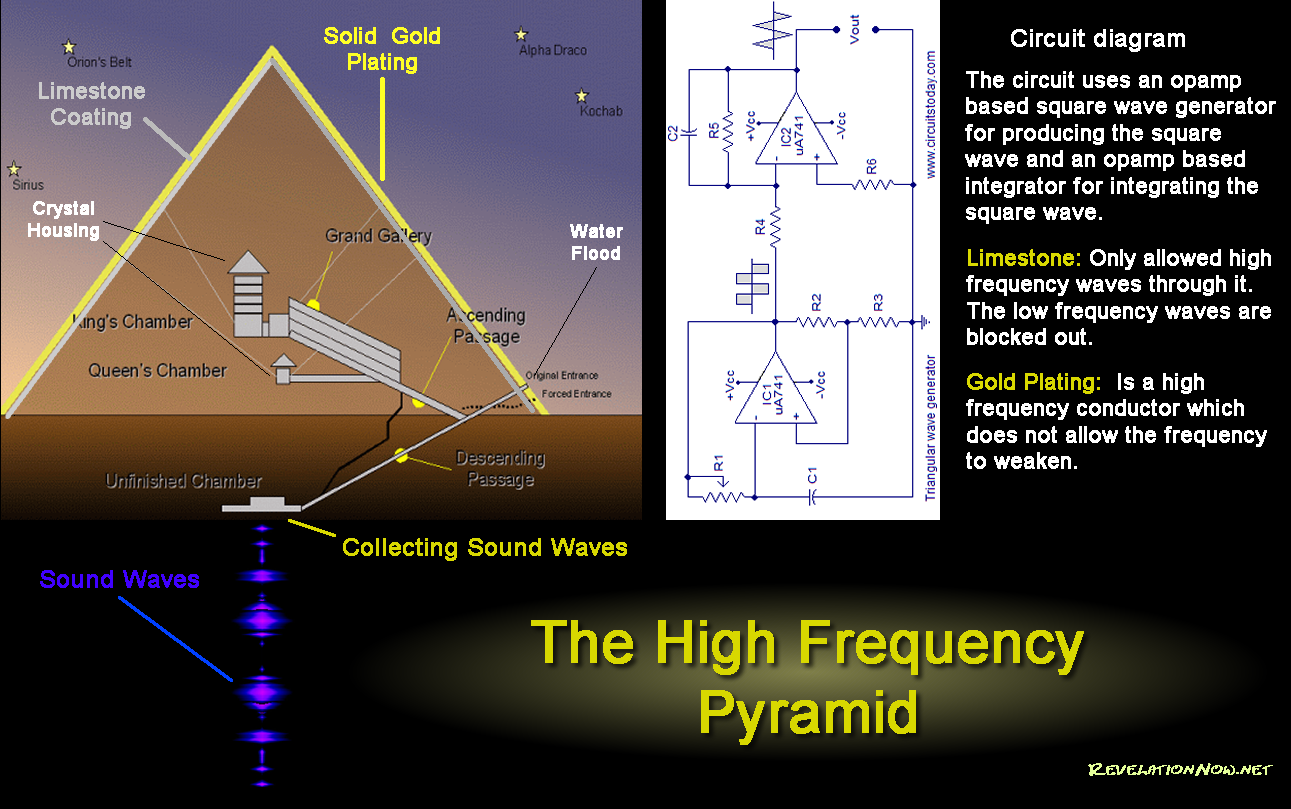 Now when I look at the King and Queen’s chamber I see a housing for the missing components. I believe there were customized crystals housed in these chambers. When the high frequency sped through the water then the crystals began to vibrate. A frequency so high it was undetectable by humans ears. Let’s get a better understanding of crystal used for frequency. A crystal oscillator is an electronic oscillator circuit that uses the mechanical resonance of a vibrating crystal of piezoelectric material to create an electrical signal with a very precise frequency.

This means a precise frequency was generated, instrument, tools, and weapons had to be configured to this precise frequency allowing them to tune in and gain power! If you were an outsider and you needed power you had to be cleared and trained about the precise frequency. Any invention in the ancient land need only tune-in and massive amounts of free energy was available.

"The Earth’s inner core has an inner core of its own, with crystals aligned in a different direction."

– Source
Let’s take a look at the architectural structure and you will see how The Great Pyramid’s design takes the energy from our rotating earth. Inside the Earth’s inner core are more crystals! Remember, I mentioned crystals were used in the King and Queen’s chamber? Well the Earth’s crystals created an ever present field of sound . . . we just can’t hear it; but it surely can be harnessed. As demonstrated by many ancient pyramid cultures. 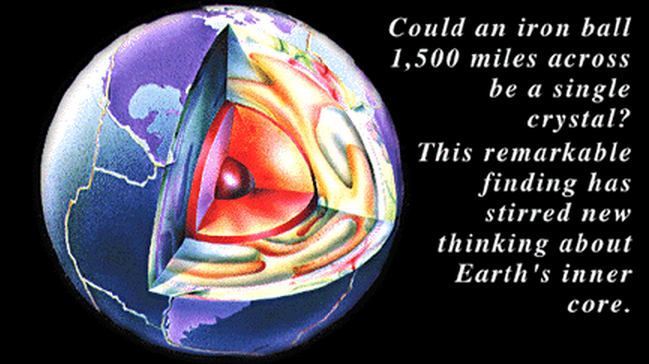 This also explains why these ancient cultures lived in such harmony with the Earth because she was more than the sustainer of life. The ancients knew the Earth was a power station giving her children free energy. As a by-product of the Earth’s free spin her crystals vibrated frequency . . . sound waves. This explains the design of the “Unfinished Chamber” of the Pyramid of Giza, accepted by academia and perpetuated by the educational systems.
The “Unfinished Chamber” is quite finished. I assure you. It was designed to capture and direct the sound waves through the pyramid. In its rawest form the sound waves come bundled in low to the highest frequencies. Again, the water acted as a “turbo boost” pushing the frequencies through four times faster than if they merely passed through air. This allowed the King and the Queen’s crystals to vibrate and increase the propagating sound waves in the pyramid! The frequencies propagated toward the outside of the pyramid where the low frequencies were filtered out and only the high frequency escaped the pyramid. The gold coating on the Great Pyramid of Giza allowed the pyramid structure to resonate only the high frequency.
Now we understand why the ancient Egyptians decided to build the Great Pyramid at the exact center of the surface of the Earth’s land mass. That must have been the best location for acoustic capture of free energy! If the Earth’s core is a massive iron/crystal core at 1,500 wide silently ringing free energy around the earth who needs fossil fuels? We are all being distracted and the solutions are right in our face. We could replicate this basic design and transform every industry and change life for the better.
At one time the entire academic systems perpetuated the Pyramid of Giza was a tomb for Cheops. I can only suspect after the Napoleon’s “scientific” theft of the inner workings of the pyramids false notions were planted in academic circles. Even then the elite knew not to share free energy with the people; let alone, with an energy the elite could not profit off. The elite worked through secret societies that spanned the globe. There is a phrase that whoever wins the wars owns the history. As you can see the Pyramid of Giza is more than just a spiritual symbol or a show of great power . . . it is a transformer of great power!
This means all the other planets in our solar system . . . including our Sun emanate sound waves; a high frequency symphony waiting to get tapped like a college keg party. We need only to disconnect from our current path of being “fear-aholics” and “doomsday prophecy junkies.” We are being distracted as a human race on unprecedented levels. The irony is answers are right in our face yet all we need to do is to focus on them. Technology has reached such a place in conjunction with the Internet where we are becoming aware. Dots are being connected much quicker now.

Instead of focusing on doom and a rush to death we need to embrace being alive. We need to focus our collective consciousness on improving our lives through free energy. The ancients left us blueprints embedded in stone. We need only use our current scientific knowledge base to reverse engineer the solutions. Understanding the Earth is not only the sustainer of life but a free energy power station should guide us in protecting her. No more needs for hydrofracturing, oil, or gas because man needs to rape the Earth in order to collect these fossil fuels. It is time to wake up as a people and feel the vibrations.

From Revelation Now @ http://revelationnow.net/2015/09/27/ancient-pyramids-were-high-frequency-power-stations/
AND SEE This Crystal Planet - How to Build a Bronze Age Global Communications and Power Network @ http://nexusilluminati.blogspot.com/2011/02/this-crystal-planet-worldwide-bronze.html

»  So Called "Experts" Are Paid To Tell Us Fukushima, Chernobyl, And Three Mile Island Nuclear Power Stations Will Always Be Safe!
» Extraordinary Discovery at the Bosnian Pyramids: Researchers uncover more underground tunnels connected to the Pyramids
» Could this Finding Dwarf the Pyramids of Giza? Long-Lost Pyramids Confirmed in Egypt | Ancient Origins
» Reports Circulating China Has A White Pyramid-Many Previously Unknown Pyramids Are Emerging-Could War Be Linked To Crimea Pyramids
» Fascinating similarities between the Pyramids of Giza and Bosnian Pyramids