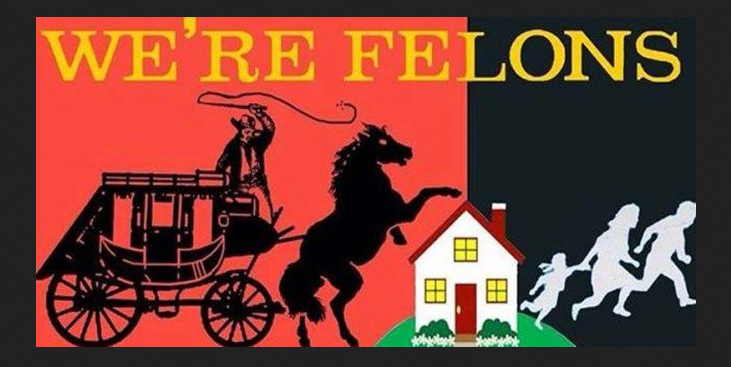 "Top megabank, Wells Fargo & Co just admitted to defrauding the United States government for nearly an entire decade, which subsequently led to the housing market collapse, and no one is going to be punished.

On Friday, the largest US mortgage lender and third-largest US bank admitted to deceiving the U.S. government into insuring thousands of risky mortgages.

According to the settlement, Wells Fargo “admits, acknowledges, and accepts responsibility” for having from 2001 to 2008 falsely certified that many of its home loans qualified for Federal Housing Administration insurance, reports Reuters.


Wells Fargo also admitted to having from 2002 to 2010 failed to file timely reports on several thousand loans that had material defects or were badly underwritten, a process that Kurt Lofrano, a former Wells Fargo vice president, was responsible for supervising.

The intentional deception by this corrupt bank led to an insurmountable debt liability for American taxpayers as the FHA was forced to pay out insurance claims on all the defective loans.

As Reuters reports, Friday’s settlement is a reproach for “years of reckless underwriting” at Wells Fargo, U.S. Attorney Preet Bharara in Manhattan said in a statement.

“While Wells Fargo enjoyed huge profits from its FHA loan business, the government was left holding the bag when the bad loans went bust,” Bharara added.

However, Bharara’s words ring hollow when looking at the bank’s punishment. For robbing the public through defrauding the US government, not one single Wells Fargo employee will face criminal charges. The bank was merely ordered to pay a $1.2 billion fine. This is barely a slap on the wrist considering the turmoil that ensued from such criminal practices.

This punishment is also a kick in the teeth to the American public who are the ones who suffer most from these megabanks fleecing the country through irresponsible and fraudulent actions only to be ‘quantitatively eased’ back into profitable standing.

Franklin Codel, president of Wells Fargo Home Lending, in a statement, said the settlement “allows us to put the legal process behind us, and to focus our resources and energy on what we do best — serving the needs of the nation’s homeowners.”

Imagine for a moment that a rapist, responsible for raping thousands of women, was just let off with a fine and responded with a similar statement. Wells Fargo, who financially ‘raped’ the public for nearly a decade, is essentially saying, “I have been raping women for years, but we can put that behind us now and focus our energy on moving forward.” And the government thinks this is okay.

With their track record of letting megabanks run amok in the US, this settlement comes as no surprise.

Until the people wake up to the atrocities being carried out against them by criminal bankers who control the government, this fleecing of the citizenry will continue. To all those who bank with any of these huge banks — pull your money out today, move it to a local bank, or find another alternative.

Failing to do so only sustains their criminal behavior. Please share this story with your friends and family as it will most assuredly be a mere blip on their televisions and deliberately easy to miss."

Matt Agorist is the co-founder of TheFreeThoughtProject.com, where this article first appeared. He is an honorably discharged veteran of the USMC and former intelligence operator directly tasked by the NSA. This prior experience gives him unique insight into the world of government corruption and the American police state. Agorist has been an independent journalist for over a decade and has been featured on mainstream networks around the world.

» Reality Check: How Does Nobody Go To Jail In Wells Fargo Fraud Case?
» Wells Fargo's "How-to fraud mortgage manual" means this "Too Big To Fail" bank is going down
» EXOGEN:"WEALTH MANAGERS FROM WELLS FARGO HAVE BEEN CALLING PEOPLE TODAY SAYING WE NOW RECOGNIZE THE CURRENCIES YOU HOLD ARE REAL...EXCHANGES COMPLETED TODAY IN PA, WITH DONG AT $1.68 AT WELLS FARGO BANK"
» Wells Fargo Lawsuit: U.S. Sues Bank Alleging Civil Mortgage Fraud
» "Here's the deal on the rates...you call the 800# for the China contract rate, $32. The contract rate for vnn over $6 but only with China 800#.":Tony