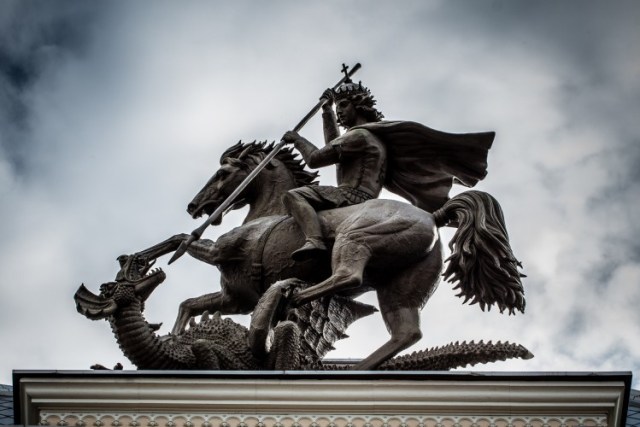 written by Dean Smith
I had reported earlier on several media reports stating that an organization called the Institute of Digital Archaeology (IDA) was building full scale replicas of the arches to a Temple of Baal found in Syria partially destroyed by ISIS last year.
The 48′ arches, that were being 3D printed in China, were scheduled to be set up simultaneously on April 19 in London England’s Trafalgar square and in New York City’s Times Square.
However, a major English newspaper, The Telegraph, is now reporting that the arch scheduled for New York City has been cancelled and the one slated for England may still be going ahead but the replica of the Baal arch will be replaced by a model of another ancient Syrian monument — the Arch of Triumph.
The Telegraph writes:

When the IDA revealed last December that it was intending to use its data and expertise to build not one but two replica Palmyra arches – to be unveiled simultaneously in Trafalgar Square in London and Times Square in New York – it generated headlines across the world.
Since then there has been some backtracking on the original idea. There will be no simultaneous unveiling in New York – they may transport the London arch there later, or build another one – and the Palmyra arch that is being reconstructed is no longer the entrance to the Temple of Bel (which survived an attempt to blow it up in August 2015) but the Arch of Triumph (partially destroyed in October) formerly located at one end of the Great Colonnade.

It is uncertain why the change, but the publicity surrounding IDA’s announcement may have caught the organization off guard. Particularly, the number of negative stories that surfaced on the Baal monuments and their plans to set up the installations in several cities over the next few years.
Christians and Jews were concerned about the arches association with Baal one of the prominent and most evil pagan gods worshiped in Canaan. It was a fertility god and the rites associated with this particular idol involved sexual orgies (Numbers 25:1-3) and sacrifice of children (Jeremiah 19:4-6).
In a bizarre twist, the day the arches were to be set up coincided with the ancients celebration of the Baal idols which typically ran in the spring as part of the fertility rite associated with the planting of their crops. In fact, there is evidence April 19th may have been a key date in many of the ancient calendars.
According to Canaanite beliefs, Baal was married to another female goddess Asherah — one of Baal’s many consorts. The two were usually worshiped together.
One of the more horrific times in Israel’s history involved the marriage of an Israeli King, Ahab, to a Phoenician princess named Jezebel. When she moved into the Israeli palace, she brought with her 450 prophets of Baal and 400 hundred prophets of Asherah (1 Kings 18:19) and set up a temple to worship these two gods.
This resulted in a spiritual showdown with the Israeli prophets Elijah and then Elisha, who were eventually able to end Jezebel’s reign and drive these gods and temples out of Israel.
But there was more going on than could be seen in the natural realm. The Bible warns that these Canaanite gods were associated with the demonic realm:

“They made Him jealous with strange gods;
With abominations they provoked Him to anger.
17 “They sacrificed to demons who were not God,
To gods whom they have not known,
New gods who came lately,
Whom your fathers did not dread. (Deuteronomy 32: 16-17 NASV)

The grammatical structure implies that the demons and gods were the same thing. When people were worshiping these Canaanite idols, they were in fact actually worshiping the demons behind them. Even in the New Testament, there are references to Satan desiring worship (Matthew 4:8-9).
Ultimately, Jezebel’s power to influence King Ahab and Israel came from the demonic forces behind these idols.
When the name Jezebel shows up several centuries later in the Book of Revelation attacking the end-times church (Revelation 2:20), it suggests the same demonic spirits associated with Jezebel (Baal and Asherah) will once again rise up to attack the Kingdom of God.
Some wondered if the construction of the Baal arches was more than just coincidental, but rather a sign of the times. Others went further and suggested the reconstruction of these temple structures could open a conduit to the demonic realm in these countries.
Sources:

»  Comment on Arches of Ba-El Temple of Marduk Being Built in London and New York
» The Temple of Baal Is About to Be Erected In Times Square In New York City
» Temple Of Baal Arch Unveiled Today In London But With Last Minute Name Change
» U.N. to Install 1000 Temples to Baal in Major Cities April 2016! (Not Just in NYC and London)
» Nelson Mandela exhibition in London, England