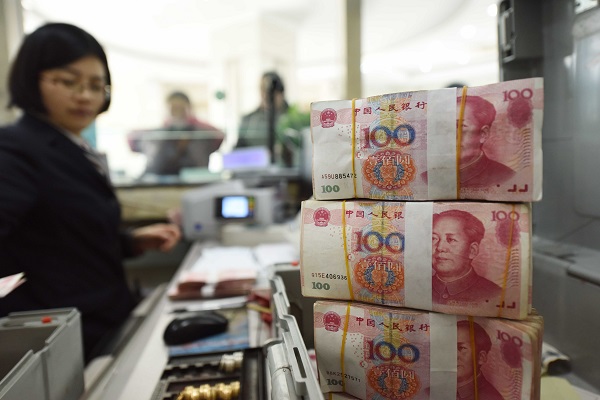 A bank staff member checks RMB banknotes at a bank in Lianyungang, east China’s Jiangsu Province, Jan. 7, 2016 [Xinhua]
Chinese central bank governor Zhou Xiaochuan on Saturday called for broadening the use of the International Monetary Fund (IMF)’s basket of reserve currencies to advance the reform of the International Monetary System (IMS).
“The IMS has inherent deficiencies and faces new challenges from globalization, financial innovation, and volatility in capital flows,” Zhou said in a statement for the meeting of the International Monetary and Financial Committee (IMFC), the IMF’s policy setting committee, on the sidelines of the spring meetings of the IMF and the World Bank.
The IMF announced it will add the Chinese yuan to its basket of reserve currencies last year. The addition will take effect Oct. 1, 2016, with the yuan having a 10.92 per cent weighting in the basket, the IMF said.
“The SDR has the potential to resolve the existing deficiencies in the IMS,” Zhou said in Washington, referring to the Special Drawing Right, an international reserve asset created by the IMF in 1969.
After the renminbi’s inclusion in the SDR, weightings will be 41.73 per cent for the dollar, 30.93 per cent for the euro, 8.33 per cent for the yen and 8.09 per cent for the British pound. The weighting will affect the interest countries pay when they borrow from the IMF.
“We can start now to gradually broaden the use of the SDR, including using it as a reporting currency in parallel with the USD and exploring issuance of SDR-denominated assets,” China Central Bank chief Zhou said on Saturday.
China has released foreign exchange reserve data denominated in the SDR in addition to the US dollar starting from this month.
Zhou said China will also explore issuing SDR-denominated bonds in the domestic market and look forward to the IMF’s further analysis on strengthening the role of SDR this year.
“We support the examination of the possible broader use of the SDR,” the official IMF communique said Saturday following a meeting of the 24-memberIMFC committee.
“The IMF will discuss the case for a general allocation of SDRs and the reporting of official reserves in SDR,” the communique said.
Christine Lagarde, Managing Director of the IMF, on Thursday praised the improvement of China’s policy communication regarding the exchange rate policy.
“We have been delighted to see the communication efforts undertaken by policymakers, particularly Governor Zhou,” Lagarde said.
“I think when it comes, in particular, to the exchange rate regime, it does clarify the situation for the better, because nobody likes uncertainties, markets in particular.”
In a widely-quoted 2009 speech, China’s Central Bank Governor Zhou Xiaochuan had argued a global system so reliant on a single currency — the US dollar — was inherently prone to shocks. Zhou had said China wanted to look towards creating a “super-sovereign” currency based on the SDR, to replace the dollar’s hegemony.
Renminbi means “the people’s currency” in Mandarin while yuan is the unit.